It seems almost trite to wheel out that old chestnut 'water is the key to life', but it is.  We are made largely of water, all our cells operate using water, our nervous system, all our organs, our lymph system and hence immune system, our brain [which is bathed in liquid], our reproductive system [babies swim in fluid until they are born].  Our entire circulatory system is water based; even thought it delivers oxygen and nutrients to cells, blood is water based. 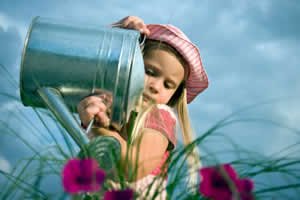 In order to expel waste and toxins, parasites and viruses, bacteria and fungi, the body uses water.  Anything harmful to the body is washed out.  It is expelled from the nose using nasal mucous, from our urinary system via the liver and kidneys using 'wee' [or 'wee wee' if you expel a lot - sorry my joke], via the intestines using 'poo' [which to be 'healthy' is usually quite soggy and soft with water], via the eyes with tears, via our skin using sweat.  We sweat out quite a lot of toxins and bacteria, which is why sweat sometimes smells.  It is actually a good sign - we have released harmful things.  To use anti-perspirants is madness.

We even release harmful substances via our ears in the form of ear wax, which although waxy still contains water.  If it doesn't have enough water content, it becomes hard and blocks up the ear. 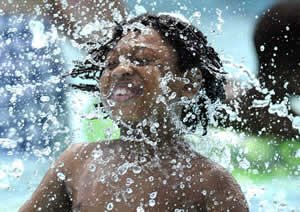 Thus one of the most helpful things you can do to help the body is to ensure you are never short of water, as without it, it cannot do the flushing job effectively.

Water is one of the those substances we tend to take for granted. We have even become a little blase about water supplies, assuming that somehow, because we have all the trappings of modernity surrounding us that our drinking water is 'safe'. Now that the West, and large parts of the East, have access to filtered, clean water and in ready suppy through a tap, [or in a bottle] we have forgotten how bad things can be without a ready clean supply.

Overall, our drinking water supplies are anything but safe.  I have provided a small sample of the papers on PubMed for you to have a look at.  There are literally thousands of papers describing tests done on drinking water, which people in the West and East have assumed to be safe, but are anything but.  Our drinking water is still riddled with bacteria, parasites, toxins, and even viruses.  We are a very very long way from having clean safe water in the East or West and it is possible that the source of many of the illnesses on this site are caused by a contaminated supply of drinking water.

The West's keenness for vaccination programmes in so called developing countries, would be far better replaced by a keenness to give those people access to clean, pure accessible water.  And we might do well to put our own house in order as well. 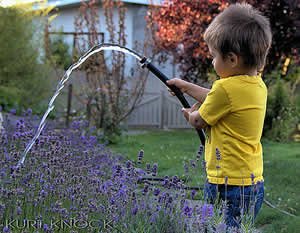 The medical term from suffering from a lack of water is dehydration and it can cause headaches, blurred vision, hallucinations, and all sorts of nervous problems [because our cells like batteries need water to operate and some of those cells are nerve cells].  Without enough water we can suffer from constipation, insomnia, tiredness, hypotension, hypertension [both are possible], nausea, coma and death.

If we get diarrhoea, we can end up being dehydrated.  If we suffer fom a fever or hyperthermia we can get dehydrated.

Many pharmaceuticals can cause dehydration.  This LIST will show you just how many.  Two apparently ordinary 'medicines' which can cause dehydration are paracetemol and aspirin.  But you will be able to see from the list that there are literally thousands that can do this.

We tend to forget that there are artificially produced foods on the market that can also cause dehydration.  The cereals made with bran, for example, can cause dehydration because the bran bulks up by absorbing water.  Most 'natural' foods containing fibre, also contain a high level of water, and are 'balanced', but many manufactured foods are not and need a higher intake of water to counteract their effects.

Water intoxication, also known as water poisoning or dilutional hyponatremia, is a potentially fatal disturbance in brain functions that results when the normal balance of electrolytes in the body is pushed outside safe limits  by overhydration i.e. over-consumption of water on its own or in other drinks.  Thus it is not too much water that causes the problem, but the loss of essential minerals.

Having said this, accidentally consuming too much water is exceptionally rare.  Water is considered the least toxic chemical compound, as such if you overdose, all that happens is that you have to wee a lot, which is inconvenient, but not life threatening.

The following advice came from a Nutritionist and is easy and simple to follow.

A half an hour to 45 minutes before each meal  - breakfast, lunch and dinner - drink at least half a pint of water.  If your fluid intake has been low up to that point increase the quantity.

Just water, nothing added to it.  Not flavoured water or fizzy water.  Just water.

Tap water is fine, as long as you know the supply is safe.

Bottled water is fine as long as it has not been tampered with to include minerals or other things the manufacturer thinks you need and you don't.  All you need is water, so what you should be looking for is water and not anything else.

Also keep a glass of pure water near you whilst you work or watch TV or read.  If you feel tempted to have a coffee or a fizzy drink, have the water instead.  Little sips on a regular basis.

Nothing wrong with tea and nothing wrong with coffee, but these are both essentially foods and when your body encounters a food, it processes it as a food, which means the flushing action becomes less effective.  Think of your body like a sewer.  The best way of flushing out the grunge in a sewer is water in quantity, not pea soup!

Finally have a glass of water by your bed.  If you wake up in the night, drink the water - don't force it down, enough to help the flushing process, which works very effectively at night.

Water, incidentally, gives you the best dreams of all.

Water is healing, it works therefore by keeping our bodies well.

Unless of course it is contaminated, in which case it 'works', in the sense of giving the person hallucinations, near death and death experiences, by whatever disease or illness it produces.

TED - How to make filty water drinkable - Too much of the world lacks access to clean drinking water. Engineer Michael Pritchard did something about it — inventing the portable Lifesaver filter, which can make the most revolting water drinkable in seconds. An amazing demo from TEDGlobal 2009.