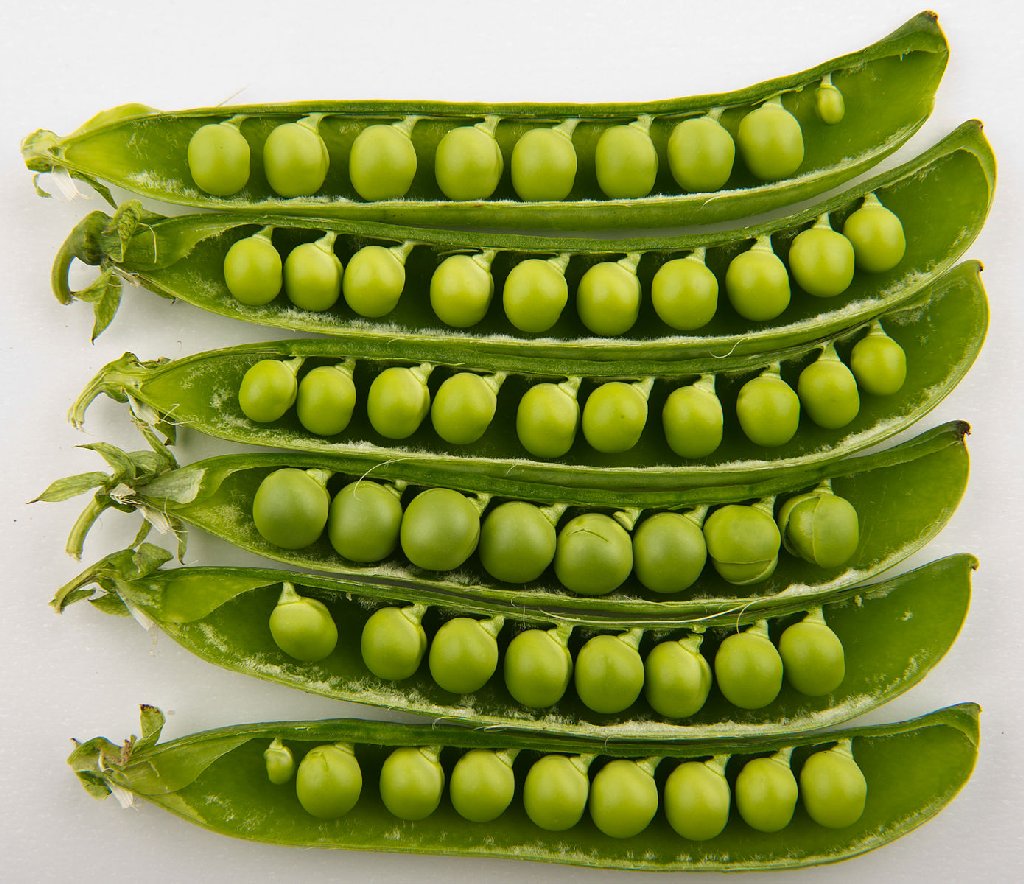 A pea is the small spherical seed or the seed-pod of the pod fruit Pisum sativum. Peas can refer to the seed pod, the seed and the plant.  Peas can be eaten fresh, boiled, stir fried, or raw and they can be frozen, dried or canned.

Pea grading involves sorting peas by size, in which the smallest peas are graded as the highest quality for their tenderness.  For those of us who had holiday jobs in order to keep ourselves afloat financially at university, the job of pea grader in the canning factories of the Fens became legendary in the 1960s [before automation].  Many an hallucination was recalled from watching peas all day to make sure they were up to scratch and many a fairy has danced over the conveyor belt in the late shifts.  The pea fairy is apparently very pretty, half way between an elf and the sort of fairy Cicely Mary Barker might have drawn. 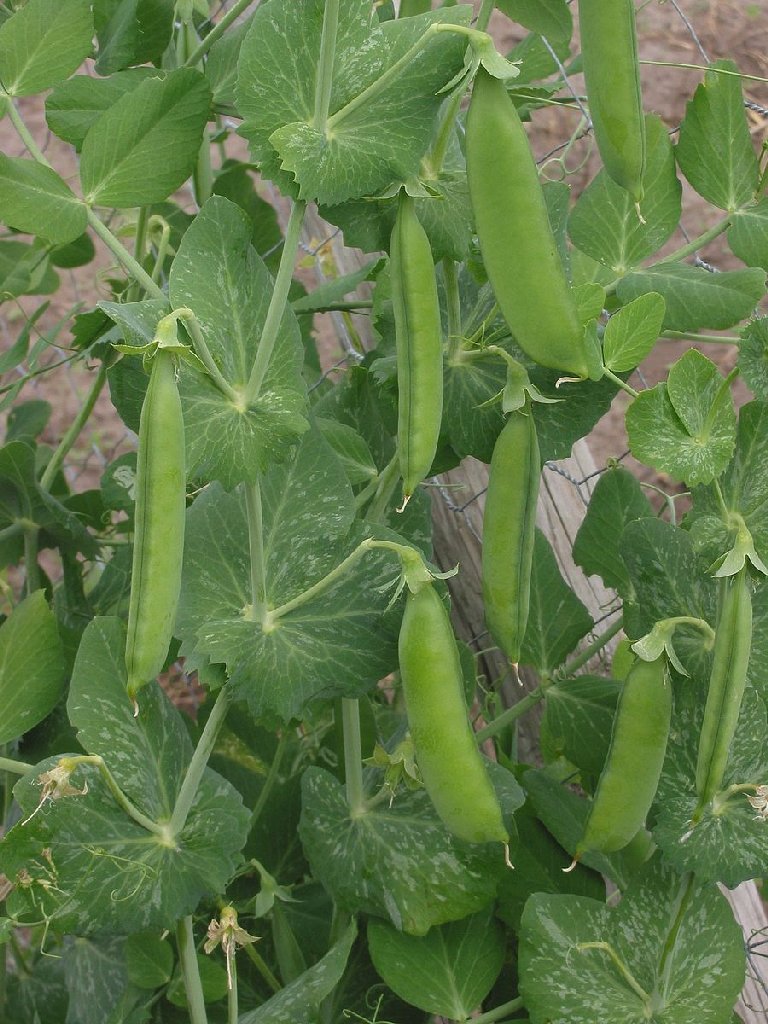 The native wild pea is restricted to the Mediterranean basin and the Near East. The earliest archaeological finds of peas date from the late neolithic era of current Greece, Syria, Turkey and Jordan. In Egypt, early finds date from ca. 4800–4400 BC in the Nile delta area, and from ca. 3800–3600 BC in Upper Egypt.  It is now, however, a cool-season crop grown in many parts of the world.

New cultivars of peas were developed by the English during the 17th and 18th centuries.  At about this time the growing of peas spread to North America.   Thomas Jefferson grew more than 30 cultivars of peas on his estate, which rather indicates we could have lost many of the old varieties.

This said a small number of ‘heritage’ varieties still exist and are very popular with allotment holders and amateur gardeners because they taste so good.

P. sativum is a small 1 to 2 metre high climbing plant. There are dwarf varieties which grow to an average height of about 1m. Extra dwarf are suitable for container growing, reaching only about 25 cm. Semi-tall reaches about 1.5m and tall grows to about 2m.

The health benefits derived from eating peas should be apparent from the enormous number of observations we have of all the illnesses they can help with.  In the Middle Ages, field peas were constantly mentioned, as they were the staple that kept famine at bay.

Peas are high in fibre, protein, vitamin A, vitamin B6, vitamin C, vitamin K, phosphorus, magnesium, copper, iron, zinc and lutein. Dry weight is about one-quarter protein and one-quarter sugar.  The selenium in some peas helps in the chelation of heavy metal such as lead.

An observation is provided showing all the Nutrient content.

According to Dr Duke’s phytochemical database peas have well over 720 medicinal activities and uses, thus any form of summary is impossible here.  We have provided a snapshot from Dr Duke’s database to give you some idea, but we recommend you search out the entry on his database for the full and up-to-date list.

P. sativum is an annual plant.  It is capable of being succession sowed, that is the peas [seeds] can by planted from winter to early summer. The soil must be free draining, but moist and fairly rich.  Soil enriched with well rotted manure and compost is ideal.

The seeds may be planted as soon as the soil temperature reaches 10 °C (50 °F), with the plants growing best at temperatures of 13 to 18 °C (55 to 64 °F). They do not thrive in the summer heat of warmer temperate and lowland tropical climates, but do grow well in cooler, high altitude, tropical areas. Many cultivars reach maturity about 60 days after planting. 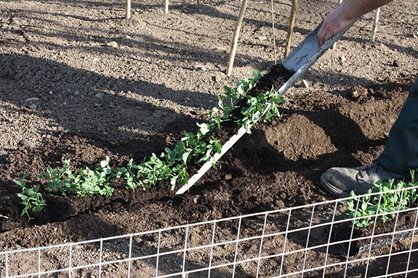 Just about every little creature known to man likes pea shoots and peas, from mice to squirrels, birds to slugs and snails, as such it is best to start them in protected pots [or in a gutter that can be planted out as a row].  If all you want is the pea shoots, they can be left on the gutter and harvested from this.

The peas grown by amateurs are called vining cultivars, meaning they cling to supports using tendrils.  My dad used to keep a supply of pea sticks for this purpose – the trimmings from bushes he had thinned or cut back.  Anything will do that has branches and is reasonably sturdy.  You make a wigwam or row of the sticks and plant the baby pea plants on the outside of the wigwam for them to climb up. 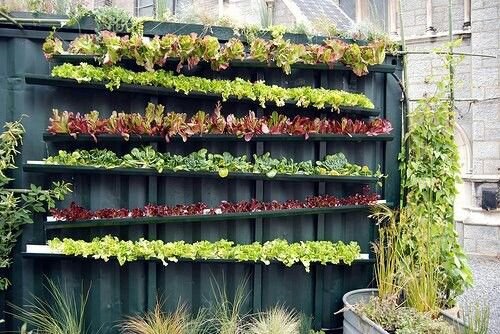 Peas can suffer from powdery mildew if grown in poor soils, too closely spaced, with erratic water supply that weakens the plant.

The pea leaf weevil is native to Europe, but has spread to other places. They are about 3.5 millimetres (0.14 in)—5.5 millimetres (0.22 in) long and are distinguishable by three light-coloured stripes running length-wise down the thorax. The weevil larvae feed on the root nodules of pea plants, which are essential to the plants' supply of nitrogen, and thus diminish leaf and stem growth. Adult weevils feed on the leaves and create a notched, "c-shaped" appearance on the outside of the leaves. 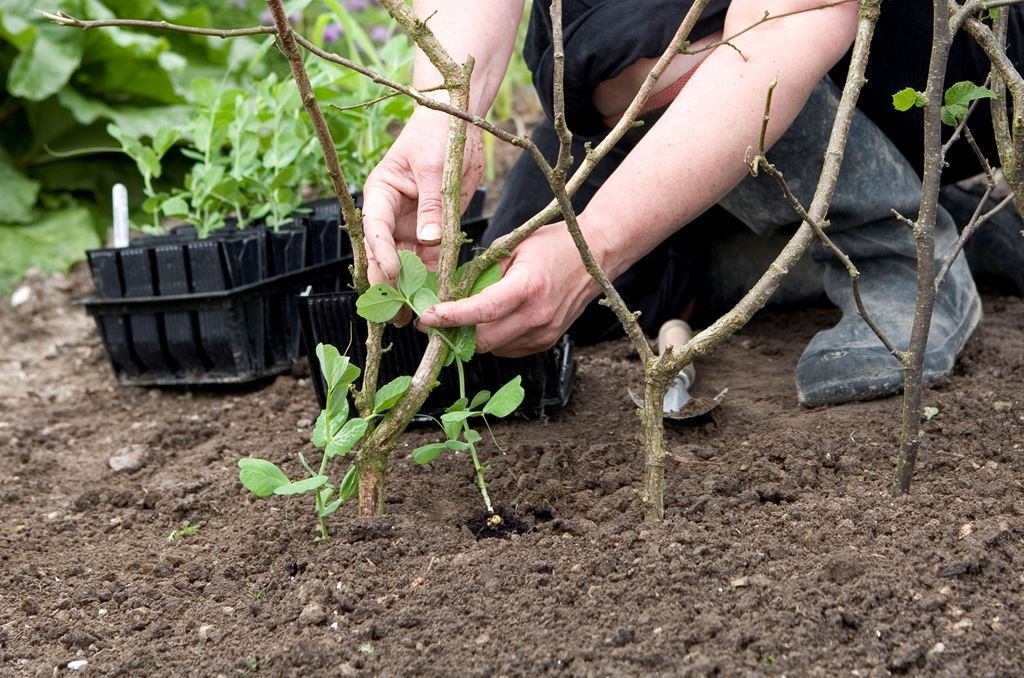 Peas, like many legumes, contain symbiotic bacteria called Rhizobia within root nodules of their root systems. These bacteria have the special ability of fixing nitrogen from atmospheric, molecular nitrogen (N2).  The root nodules are sources of nitrogen for the peas. You should thus NEVER pull up a pea plant once it has finished producing peas.  Instead leave it to die down naturally.

When a pea plant dies naturally, following the harvest, all of its remaining nitrogen, incorporated into amino acids inside the remaining plant parts, is released back into the soil. In the soil, the amino acids are converted to nitrate (NO3−), making the nitrogen available to other plants, thereby serving as fertilizer for future crops.

If, as you should be doing, you use a rotation system for the crops in your kitchen garden, or allotment, you can see that the next crop to be grown on the areas on which the peas were grown can then be nitrogen loving and you will have no need for artificial fertilisers. 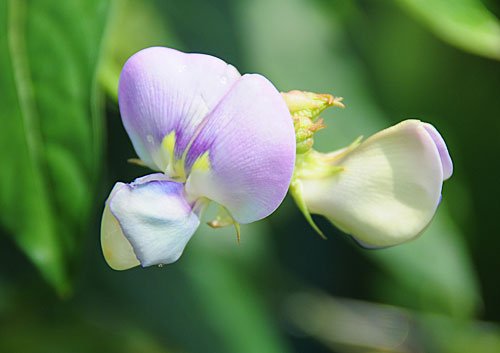 do not eat the flowers

Peas are an enormously versatile vegetable.  The various ways in which peas can be served are:

If you are using fresh or frozen peas, peas, cream, mint and tarragon all complement each other, but there is a danger with peas that you lose the sheer joy and some of the nutritional value of eating peas by complicating the recipe.  Eaten with meat such as duck, beef, chicken or lamb, or with fish, they are best not complicated in any way.

But they can form the foundation of some very tasty vegetarian meals, especially when added to pasta. And they can be added to rice dishes just before the end of cooking, so that they retain their nutrients and bright green colour.  Thus you will find peas added to paella and the classic dish risi e bisi [pea risotto with parmesan].

Marrowfat peas are green mature peas that have been allowed to dry out naturally in the field, rather than be harvested whilst still young like the normal garden pea. The pods in this case are usually dry and shrivelled and the peas hard.  They are used to make mushy peas and also the snack food wasabi peas. 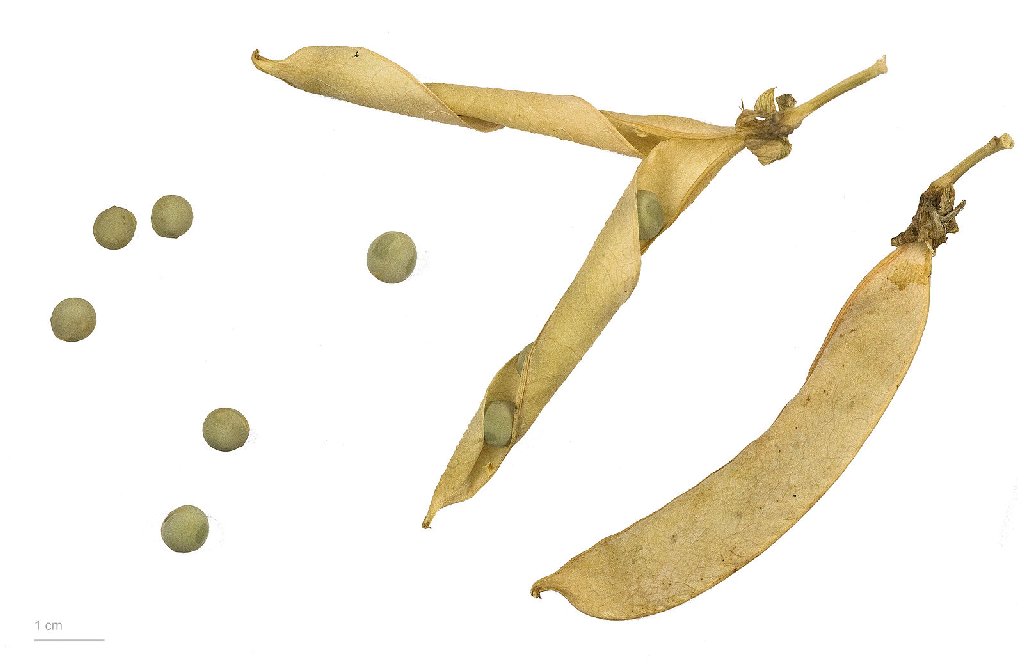 To serve 4 people, take 450g/6oz marrowfat peas, and soak in cold water overnight.  Drain the peas and rinse well under running water. Place the peas into a large, lidded saucepan, cover with 600ml water and bring to the boil. Reduce the heat until the mixture is simmering, cover the pan with a lid, then simmer for 25-30 minutes, or until tender. Remove the lid and continue to cook until most of the water has evaporated and the peas are very soft.

Drain off any excess water from the cooked peas, then add butter to taste, salt and freshly ground black pepper.  Lemon juice may also be added or malt vinegar to provide a slightly sweet/sour taste.

These can be served with boiled ham, battered fish, grilled fish, fried fish, fish cakes, and pies [like beef and ale pie].  If made into a sort of cake shape with a well in the middle, an egg can be dropped into the well and they can be baked in the oven, then smothered with a rich cheese sauce simply made using warm double cream combined with a lot of grated cheddar cheese. 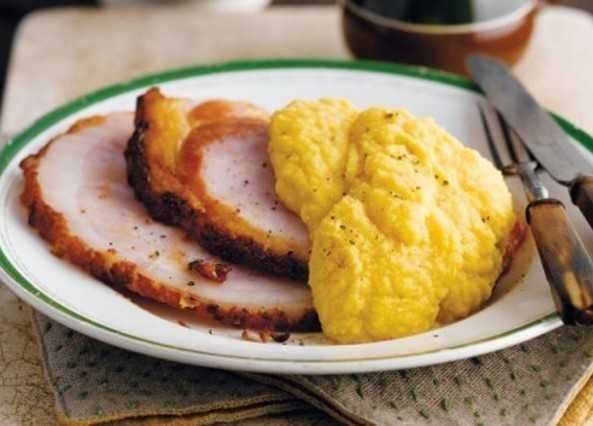 Pease pudding is traditionally made with ham stock, occasionally the split peas are cooked with the ham, but this is for vegetarians.  If you have an Aga or similar this is a perfect dish to be left in the bottom oven for a few hours.

This can be eaten plain.  But you can also ring the changes depending on what it accompanies.  To this can be added roasted cumin seeds, for example, or it can be topped with fried crispy onion. It goes well with pickles, chutneys and pickled vegetables. It has also been served with faggots [a type of meatball].  Pease pudding was once a staple of medieval cuisine, although their portion control sounds suspect. 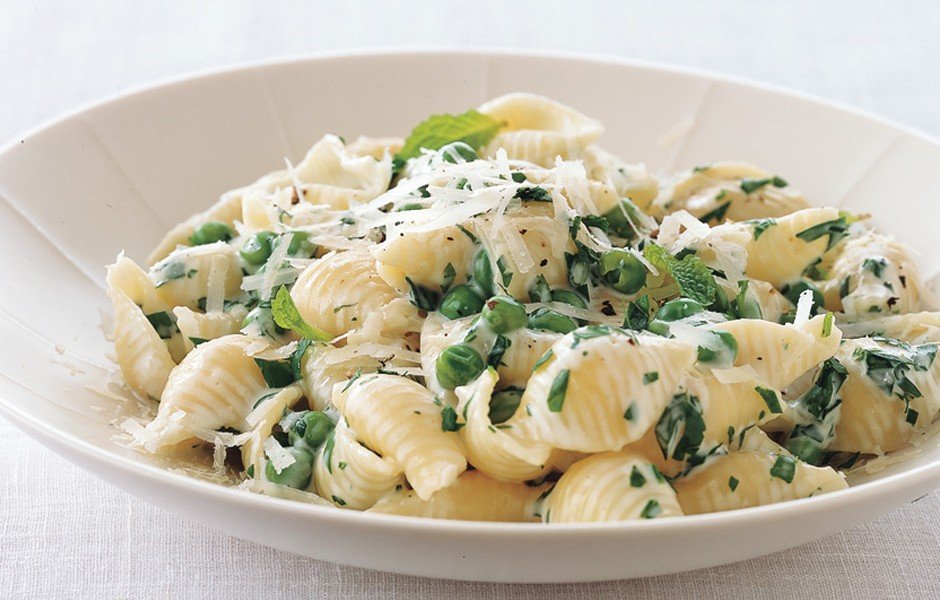 other sorts of pasta also work well with the following recipe 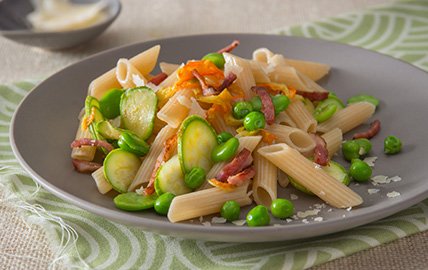 Penne with peas and beans 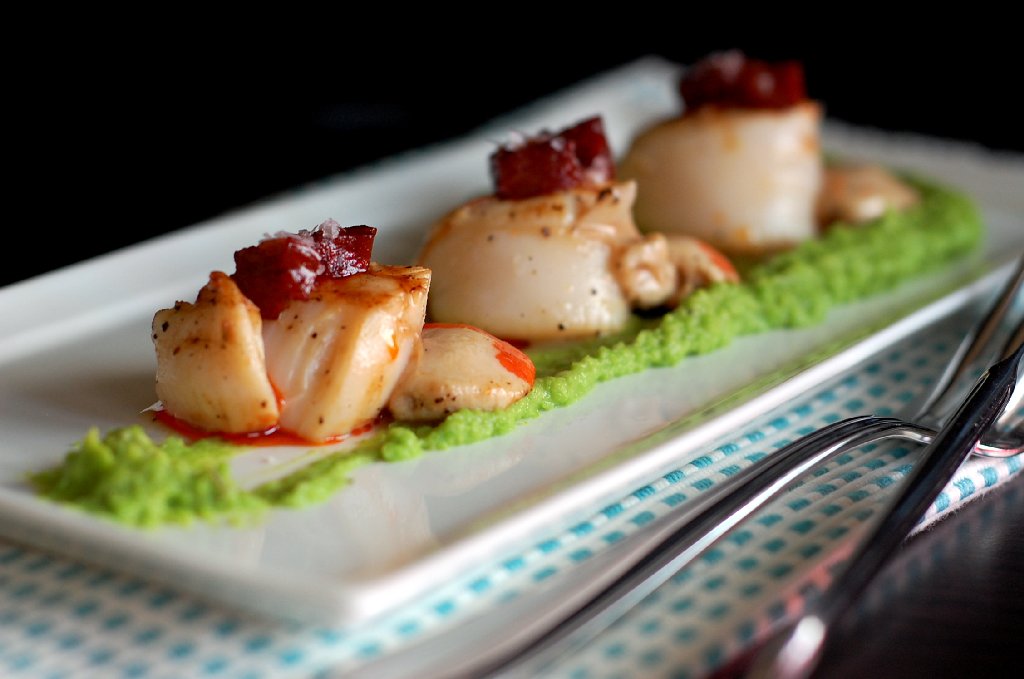 This can be placed in a food processor when cold to make a smooth soup.  It can then be served warm or cold with a generous dollop of sour cream as a garnish.

The same recipe works with cooked lentils, for example, puy lentils and is just as nice.  The dressing is deliberately ‘light’ because of the delicacy of the pea shoots. 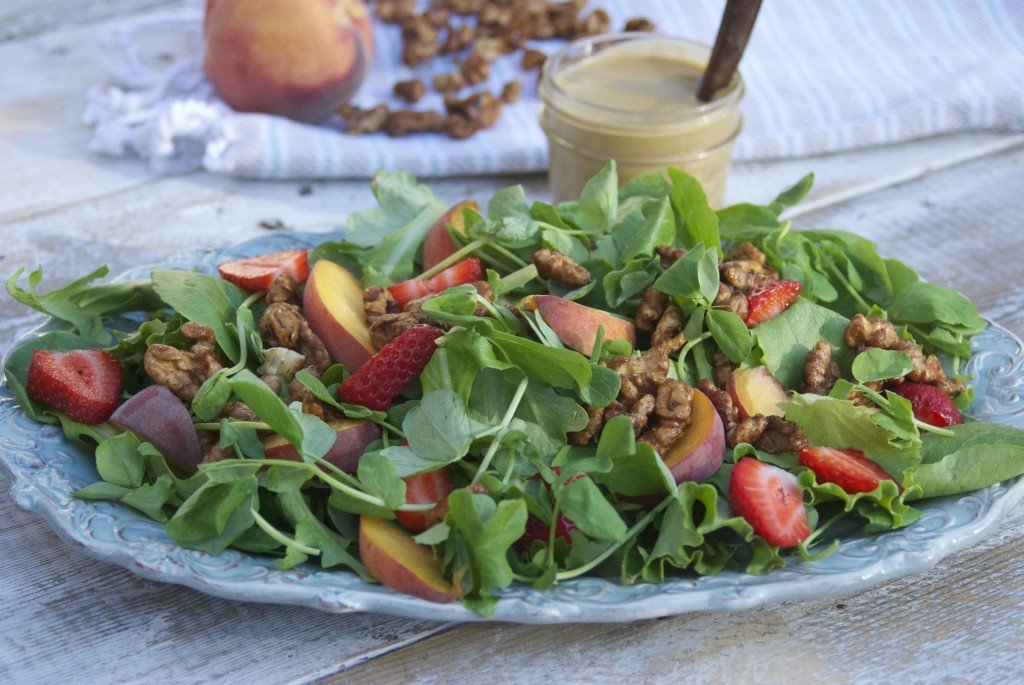 Fresh peaches can be used instead of mangoes and this recipe also works well with duck instead of chicken.

Any soft cheese with an edible rind would work well here including such delicious cheeses as the Tunworth cheese.  This can be served with a crusty bread to soak up the cheese and juices. 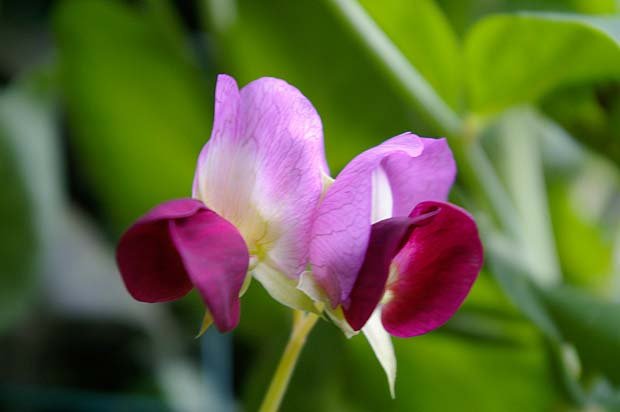