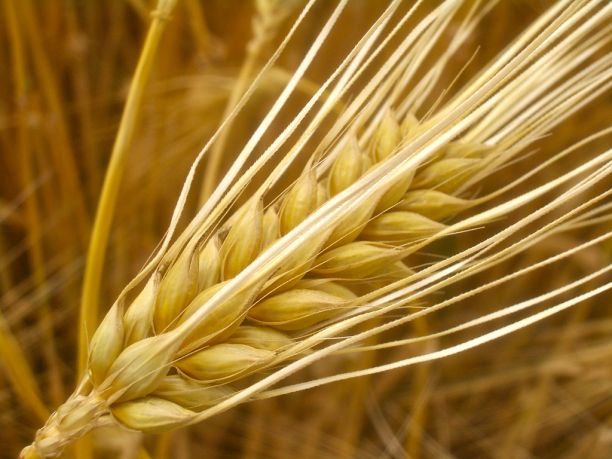 Barley (Hordeum vulgare L.), a member of the grass family, is a major cereal grain.

It is used for a wide range of things besides simple human food.

It is used as animal fodder, as a source of fermentable material for beer and certain distilled beverages.  Barley grains are also made into malt in a traditional and ancient method of preparation.  Barley straw has been placed in mesh bags and floated in fish ponds or water gardens to help reduce algal growth without harming pond plants and animals.

Barley is Europe's oldest cultivated cereal.  Pot barley or Scotch barley is dehulled, and its outer, inedible casing removed, but it still has its bran and germ, which makes it very nutritious.  Pearl barley is dehulled and then further processed to remove the bran. Although less nutritious, it can still be useful in the kitchen, adding a creamy richness to soups, stews and pilafs.

It is a part of some very traditional dishes -  Scotch broth and Irish stew, for example, but we have provided some recipes from Hugh Fearnley-Whittingstal that show it is actually a very versatile grain.  He even recommends it being used as an alternative to arborio rice in creamy, risotto-style concoctions. 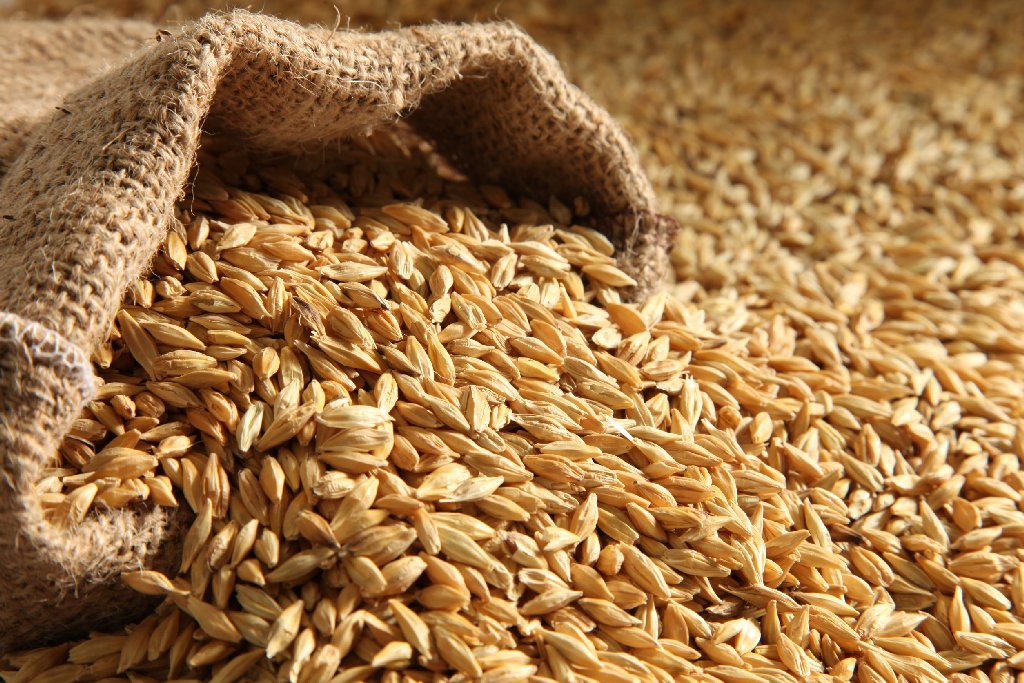 Archaeological evidence has revealed that barley (Hordeum vulgare) is one of the oldest crops used by ancient farmers, and it is hoped that studies of the time and place of barley domestication may help in understanding ancient human civilization.

Remains of barley (Hordeum vulgare) grains found at archaeological sites in the Fertile Crescent indicate that about 10,000 years ago the crop was domesticated there from its wild relative Hordeum spontaneum. ….. The wild populations from Israel-Jordan are molecularly more similar than are any others to the cultivated gene pool. The results provide support for the hypothesis that the Israel-Jordan area is the region in which barley was brought into culture. In landraces from the Himalayas and India, the BKn-3 allele IIIa prevails, indicating that an allelic substitution has taken place during the migration of barley from the Near East to South Asia. Thus, the Himalayas can be considered a region of domesticated barley diversification.  PMID:  10742042 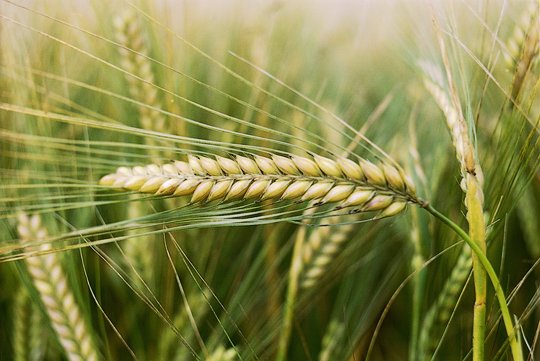 According to a widely accepted theory on barley domestication, wild barley (Hordeum vulgare ssp. spontaneum) from the Fertile Crescent is the progenitor of all cultivated barley (H. vulgare ssp. vulgare). To determine whether barley has undergone one or more domestication events, barley accessions from three continents have been studied ….. A clear separation was found between Eritrean/Ethiopian barley and barley from West Asia and North Africa (WANA) as well as from Europe. The data from chloroplast DNA clearly indicate that the wild barley (H. vulgare ssp. spontaneum) as it is found today in the "Fertile Crescent" might not be the progenitor of the barley cultivated in Eritrea (and Ethiopia). Consequently, an independent domestication might have taken place at the Horn of Africa.  PMID:  17279366

Barley is now cultivated on a worldwide basis.

Barley arrived in Britain relatively late, about 500BC. Its name in Old English is bære, a clue to one of its main uses in the brewing of beer. It's described in the traditional English folksong John Barleycorn, which portrays the dramatic and violent life cycle of barley, from reaping to threshing and malting and turning it into beer and flour: "But a Miller used him worst of all, For he crush'd him between two stones."

Barley is one of the three primary gluten-based grains. Therefore, in almost all cases, foods made with barley will contain the gluten protein, and people following a gluten-free diet will need to avoid it. 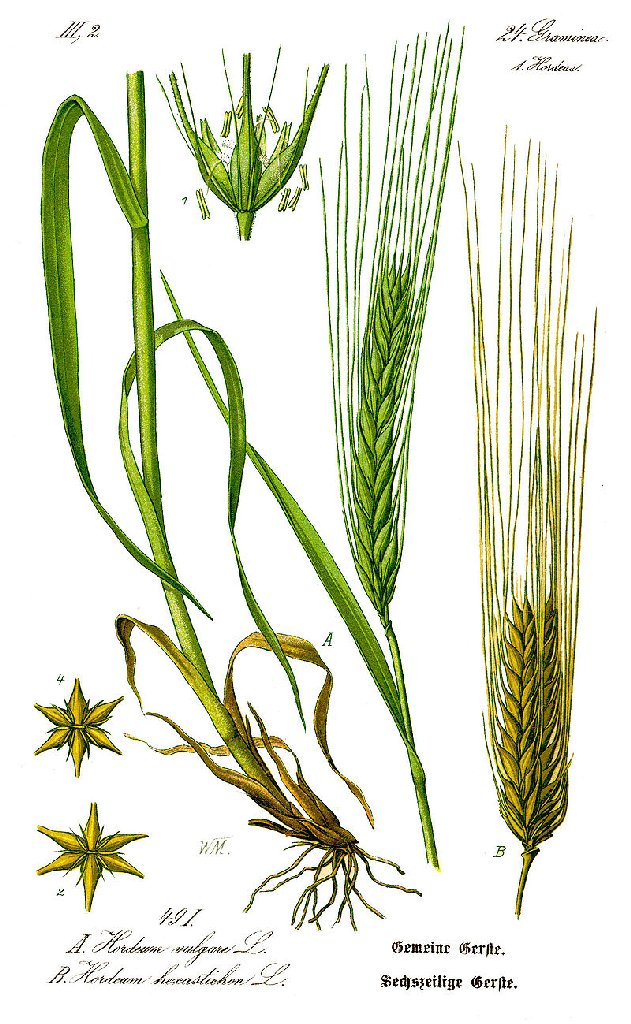 Although barley does contain gluten, it is not enough to make the bread really rise.  Hugh Fearnley-Whittingstall describes loaves made exclusively from the flour as “tough and heavy”. Nevertheless, Roman gladiators were fed on barley bread, and were known as hordearii or barley men, from the cereal's Latin name hordeum vulgare. These days, barley flour is rarely used in isolation, but it does add a tasty, malty depth of flavour when used in combination with other, gluten-rich flours. The classic granary loaf is speckled with tangy flecks of malted barley.

Some people are also allergic to barley. The effects can be anything from rash, to dermatitis or even anaphylaxis.   The exception appears to be barley syrup [malt syrup]:

It is not known whether trace amounts of proteins that may remain in cereal-starch-derived food ingredients even after food processing can trigger allergic symptoms in cereal-allergic individuals. The aim of this study was to find out if barley starch syrup causes allergic reactions in patients with allergy to wheat, barley, rye or oats. Fifteen children with allergy to these cereals, confirmed by double-blind placebo-controlled food challenge (DBPCFC), were selected for the study. When exposed to cereals, seven of the children (47%) showed immediate type reactions, such as urticaria, rash or anaphylaxis. Eight of the children (53%) showed delayed type reactions, such as deterioration of atopic dermatitis or diarrhoea. The fifteen children with allergy to cereals were exposed to barley starch syrup in DBPCFC and none of them showed any objective signs of allergy. On skin-prick tests (SPT), five of the children (33.3%) showed a positive (>or= 3 mm) reaction to at least one of the cereals but none of them to barley starch syrup. This study confirmed with 98% confidence that at least 90% of the patients with verified allergy to cereals will not react with allergic symptoms to barley starch syrup.  PMID: 19117084 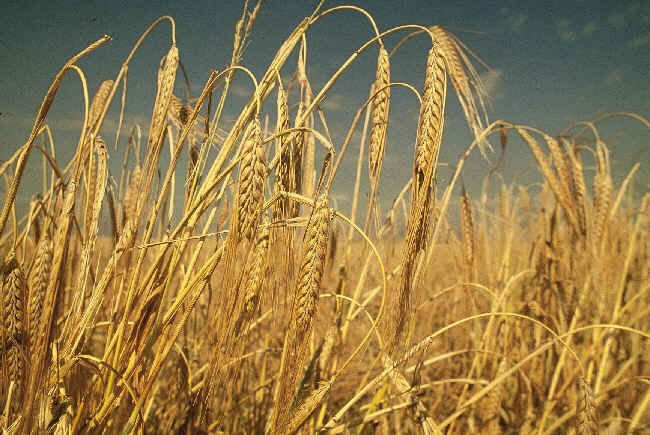 Interestingly it is not only the obvious products made from barley – biscuits, bread etc that can cause allergic reactions, beer can too:

Urticaria from beer is an IgE-mediated hypersensitivity reaction induced by a protein component of approximately 10 kDa deriving from barley. This allergen does not seem to be related to the major barley 16-kDa allergen responsible for baker's asthma. Because of the severity of the allergic manifestations to beer we recommend testing atopic patients positive to malt/barley and/or who exhibit urticarial reactions after drinking beer for their sensitivity to this beverage.  PMID:  10202351

There is also a condition known as ‘baker’s allergy’, which can be brought on by over exposure to flour: 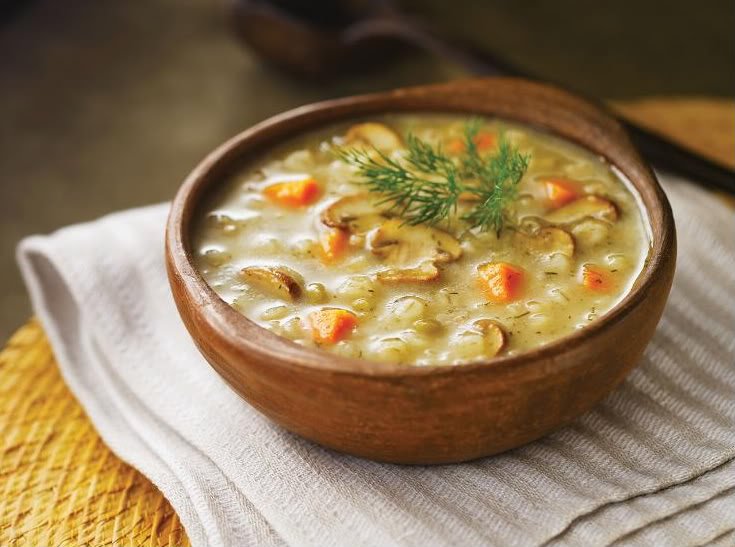 A 50-year-old man developed bronchial asthma both after exposure …. to feeding stuffs and cereal flours in his work environment and after ingestion of beverages made of these cereal grains……..
Allergy to storage mites (Lepidoglyphus destructor), house dust mites (Dermatophagoides pteronyssinus and farinae), and barley and corn flours were tested … Bronchial challenge tests with every allergen showed no response except for an immediate response to barley flour. The most relevant clinical feature was an immediate asthmatic response developed after oral provocation with either barley-made beer or barley flour itself which indicates IgE-mediated mechanism.  PMID: 7648375

In contrast to the rather gloomy picture painted above, those who are lucky enough to not have any intolerances or allergic reactions to barley are likely to benefit from a wealth of beneficial chemicals in barley.  The observations below provide research papers, but this paper – though it has no experiments to back it up, shows the potential. 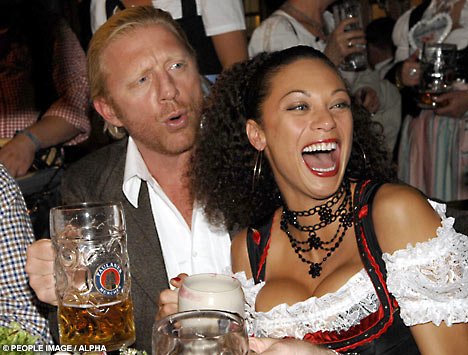 Beer is one of the earliest human inventions and globally the most consumed alcoholic beverage in terms of volume.

The extracts of these ingredients, especially the hops, contain an abundance of polyphenols such as kaempferol, quercetin, tyrosol, ferulic acid, xanthohumol/isoxanthohumol/8-prenylnaringenin, α-bitter acids like humulone and β-bitter acids like lupulone. 8-prenylnaringenin is the most potent phytoestrogen known to date. These compounds have been shown to possess various anti-bacterial, anti-inflammatory, anti-oxidative, anti-angiogenic, anti-melanogenic, anti-osteoporotic and anti-carcinogenic effects. 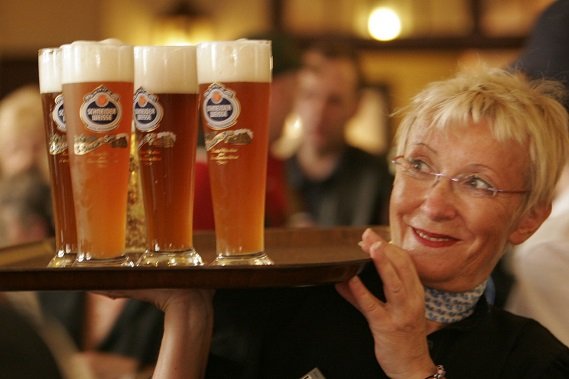 Epidemiological studies on the association between beer drinking and skin disease are limited while direct evidence of beer compounds in clinical application is lacking. Potential uses of these substances in dermatology may include treatment of atopic eczema, contact dermatitis, pigmentary disorders, skin infections, skin ageing, skin cancers and photoprotections, ….. Further studies are needed to determine the bioavailability of these compounds and their possible beneficial health effects when taken by moderate beer consumption. PMID: 23802910 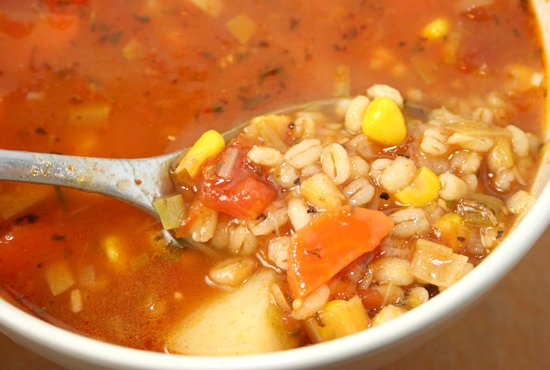 sweetcorn and barley soup with carrot and tomato

When considering how to use barley in your kitchen, think about substituting it for rice or couscous in any of your favourite recipes.

Try it, cooked until tender, with chopped, toasted hazelnuts, lots of chopped parsley and/or mint and shredded, cooked leftover lamb or chicken, and a mustardy vinaigrette for a substantial salad – a portable deli/lunchbox version of the Scotch broth.

Stir it with fried mushrooms in a rich pilaf. Add pearl barley to a smoked ham and vegetable broth.
Or for something truly unexpected, but very simple and heartening, try the traditional Sephardi dish, belila, made by simmering pearl barley until tender and sweetening it with honey before stirring in rose- or orange-blossom water and chopped almonds and/or pistachios. Traditionally served to celebrate a child cutting its first tooth, it also makes a very good, warming breakfast, either on its own or with some thick yoghurt stirred into it. 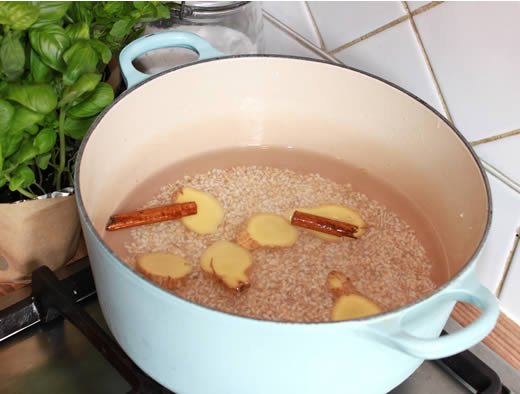 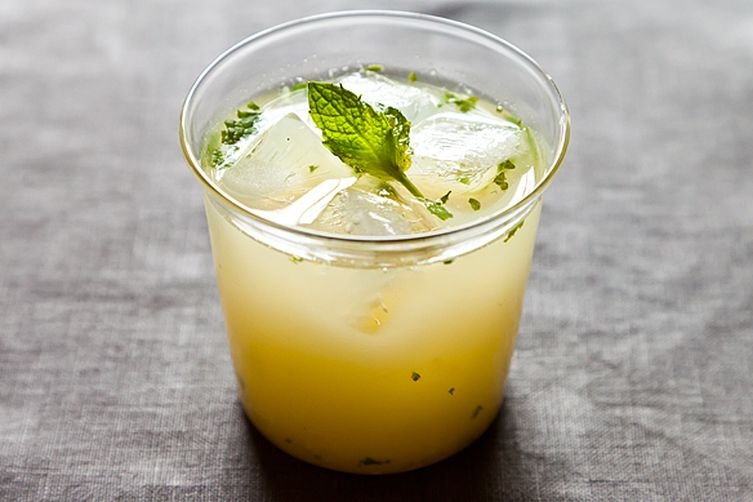 The person who invented this recipe [an unknown Internet contributor] also says that the left over Barley should not be wasted and can be used for : 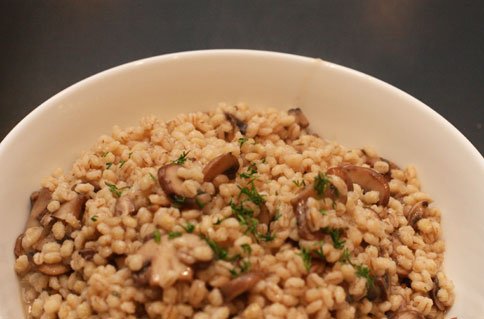 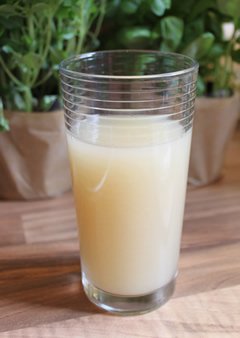 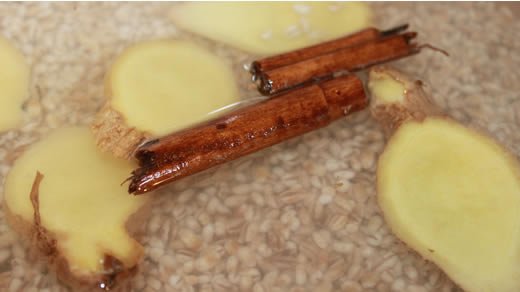