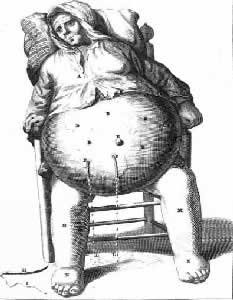 Oedema is the medical term for fluid retention.  The old fashioned name for this complaint was 'dropsy'.

We are nearly all water.  Our cells are largely water based, and many of the chemical processes that help us live and survive rely on water to function.  Thus the body’s regulation of fluids is an extremely important function.

We take in fluids in the form of drinks, but we tend to forget that many foods also contain water – most vegetables and fruits have a high water content, a small amount of water comes in via the air we breathe.

We lose water by breathing, sweating, crying, and urination [weeing].  The majority of fluid output occurs via the urine, “approximately 1500 ml/day (approx 1.59 qt/day) in the normal adult resting state”.  In addition, we also lose water through faeces and women lose small amounts via ‘vaginal secretions’.   I suppose men also lose a small amount via semenal secretions too!  When a person is ill, fluid may also be lost through vomiting, diarrhea, and haemorrhage. An individual is at an increased risk of dehydration in these instances, as the kidneys will find it more difficult to match fluid loss by reducing urine output (the kidneys must produce at least some urine in order to excrete metabolic waste.)

The body's homeostatic control mechanisms are responsible not only for temperature, but also the balance of fluids.  We can see why, temperature can be  controlled via perspiration for which water is needed. There are two  endogenous hormones that play a part in maintaining correct water balance -  ADH (Anti-diuretic Hormone, or  vasopressin) and Aldosterone which has a key part to play in mineral balance [principally sodium, potassium and calcium]. 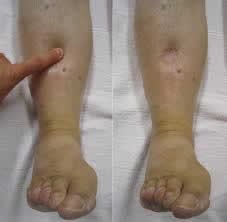 Generally speaking, if we are getting low on water, the body’s regulatory system lets us know by telling us that we are thirsty.  There is a chemical process on which this relies.  The fluid outside the cells becomes unbalanced [the dissolved salts become more concentrated] and things called ‘osmoreceptors’ detect this is the case and send signals to the brain.

If the body is becoming fluid-deficient, this will be sensed by the osmoreceptors which send a signal to the brain – more specifically the posterior pituitary.  The posterior pituitary then releases ADH – vasopressin – and this in turn causes fluid to be retained by the kidneys and urine output to be reduced. This is why our wee gets darker and darker if we don’t drink enough – the concentration of unwanted chemicals  - metabolic wastes - becomes greater.  It is worth noting that most ADH/vasopressin is stored in the posterior pituitary to be released into the bloodstream; however, some is also released directly into the brain, where it plays an important role in social behavior and bonding 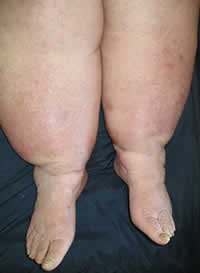 If you are ill and fluid loss is greater than fluid gain for example if you vomit or have diarrhoea or are bleeding, this too might lead to  negative fluid balance. In this case, fluid is often given intravenously to compensate for the loss – you are put on ‘a drip’.

So to summarise – fluid deficiency causes ADH release, which results in retained fluid in the kidneys and reduction of urine output.

Conversely, if fluid levels are excessive, secretion of ADH is suppressed or reduced, resulting in less retention of fluid by the kidneys and a subsequent increase in the volume of urine produced.

Oedema was formerly known as dropsy and is “ an abnormal accumulation of fluid beneath the skin or in one or more cavities of the body that produces swelling”. As we have seen, the amount of fluid in the body is determined by the balance of fluid homeostasis, and increased secretion of fluid into the body or impaired removal of this fluid may cause oedema. 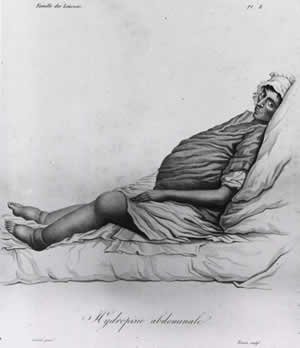 One of the most frequently overlooked causes of fluid retention is lymph system disease.  The lymph system is a closed system.  Fluid enters through the walls of lymphatic vessels, which can stretch to hold more fluid as necessary.  The lymphatic system has no heart to pump lymph round the body.  Lymphatic vessels can contract, but the circulation of lymph depends mainly on external pressure, lymph is squeezed along vessels by the pressure associated with breathing, intestinal movements and the movements of skeletal muscles.  Thus any form of blockage or damage may cause oedema and inadequate pressure [poor breathing practises, lack of exercise etc] may also be the cause.

The lymph system should be the first system examined by doctors, but it rarely is, most doctors only examine the secondary causes - which are the renal or cardiovascular system.  In effect

If blood pressure is low (hypotension), the filtration rate in the kidneys will lessen, causing less fluid reabsorption and thus less urine output.  If blood pressure is high [hypertension] , the filtration rate in the kidneys increases but the narrowing of the arteries and veins means there is less room for the fluids in the body to be carried back to the kidneys to be processed, so it is the problems with the arteries and veins [and often the valves in places like the legs]  that leads to fluid retention in the rest of the body.

We can think of the arteries like a pipework system to carry nutrients and fluids around the body, if it gets ‘furred up’ like water pipes, less fluid can flow, so more water gets retained in the body.  It doesn’t help if we don’t exercise much either, as exercise helps to pump the blood round the body and thus improve the water and fluid removal.  The problems tend to be rather a vicious circle because if you have heart problems you can’t exercise much because you have no puff, but by not exercising you make things worse.

Other illnesses can also cause fluid retention - liver cirrhosis being one but again the root cause may be the same. 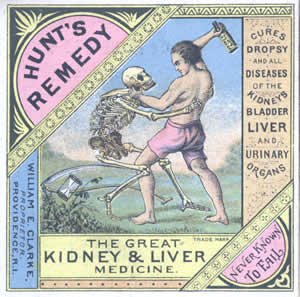 There are two treatments that are available:

depends on the cause - see the relevant sections.

NOTE
An exceptionally important section that is pertinent to this section is that on Anaphylaxis.  The reason will become clear if one follows the LINK.  The description uses the work of the Nobel prize winner Dr Charles Richet