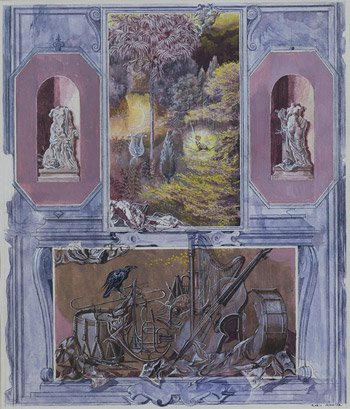 The Nightingale victorious over musical instruments

Chlorodyne is the chemical name for one of the most famous patent medicines sold in the British Isles.

It was invented in the 19th century by a Dr. John Collis Browne, a doctor in the British Indian Army; its original purpose was in the treatment of cholera.

Browne sold his formula to the pharmacist John Thistlewood Davenport, who advertised it widely, as a treatment for cholera, diarrhoea, insomnia, neuralgia, migraines, etc. As its principal ingredients were a mixture of laudanum, tincture of cannabis, and chloroform, it readily lived up to its claims of relieving pain, as a sedative, and for the treatment of diarrhoea.

The current recipe, as you can see below, no longer contains any of these things – opium, cannabis or chloroform, but instead is based on morphine and peppermint oil, which is far less satisfactory.  If you turn to the section on morphine you will be able to see why. 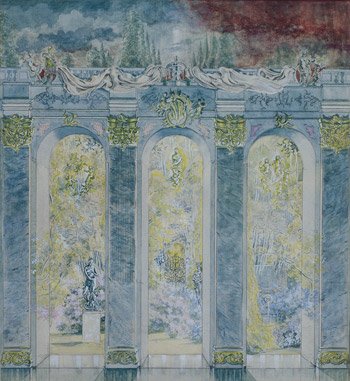 As Wikipedia says “Chlorodyne sold extremely well for many years”.

And I think we can guess why.  I can’t imagine a more effective mixture for helping you see the fairies and if you turn to the Observations and the paintings on this page which are all by Robin Ironside, you will see that  Robin Ironside saw numerous fairies and amazing vistas by using it in rather large quantities.

In the days when  its active ingredients were well known, local chemists' shops would make up cheaper generic versions for sale to their customers. Here is an example of such a generic formulation, from Materia Medica by William Hale-White & A.H. Douthwaite, 21st edition (1932):

Wounded Man in a bed-sitting room 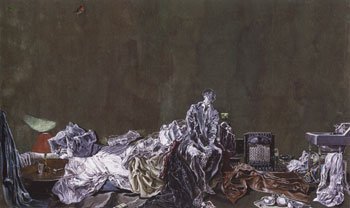 Besides the generics, a number of rival sellers marketed their own branded versions of the formula, brands such as "Freeman's", "Teasdale's", and "Towle's". 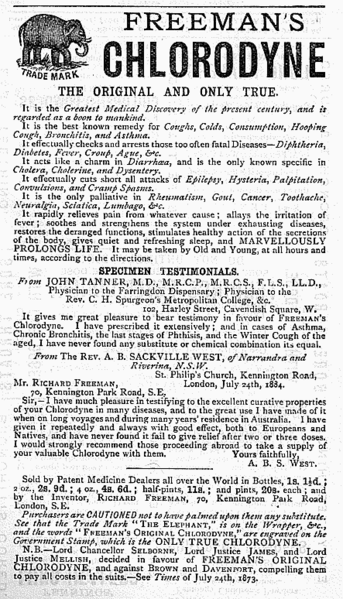 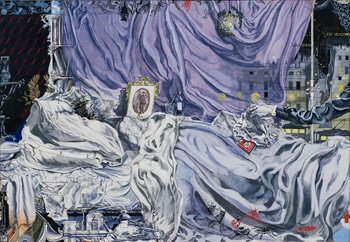 Needless to say, the combination of cannabis, opium and chloroform not only ensured its popularity, but also ensured that it was highly addictive.

Deaths from overdoses, either accidental or deliberate, became a frequent occurrence.

A common feature of the coroner's report in such cases would be the description of the deceased's body being found in a flat or bedsit littered with empty Chlorodyne bottles. Over the decades of the twentieth century, the cannabis was removed from the formulation, and the amount of opiates in the medicine were progressively reduced.

It is now a shadow of its former self.

All the paintings on this page are by Robin Ironside mentionned in the text as an imbiber of this mixture.

Robin Ironside was a painter in gouache of Surrealist fantasies, designer for the theatre and writer on art. Born 10 July 1912 in London, he studied at the Courtauld Institute of Art and abroad, but was self-taught as a painter. He was Assistant Keeper at the Tate Gallery 1937–46; and Assistant Secretary of the C.A.S. 1938–45. His first one-man exhibition in London was at the Redfern Gallery (with his brother Christopher) in 1944; his first in New York at Durlacher Bros. 1952. He collaborated with Christopher Ironside in painting and applied art, and in theatrical décor for Sylvia, Covent Garden 1952, and A Midsummer Night's Dream, Edinburgh Festival 1957, etc. 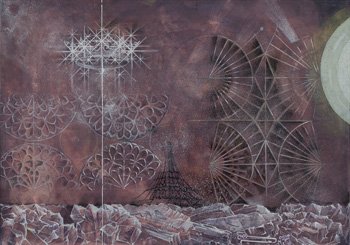