Ironside, Robin - Satyr Offering an Apple to a Spaniel

After the war, there came a moment when Robin’s loathing for the bureaucracy of the Tate and his passion for writing and painting set up an unbearable conflict inside him. He became increasingly driven, and art alone dominated his life.  He suggested to the Tate that they raise his salary to a decent wage, saying he’d leave if they didn’t; and when they did he resigned all the same.

“The administrative needs of this very important but unhappy institution are such that, within its doors, I must largely renounce the pursuit of knowledge and that official occasions for enlarging my appreciations elsewhere hardly, if ever, occur,” 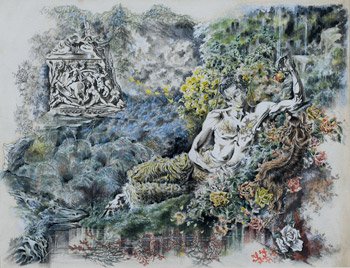