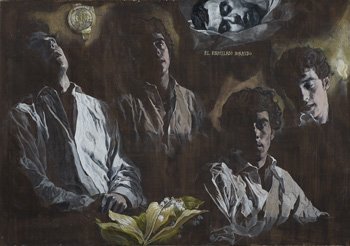 After Robin died, Christopher got the following letter from Angus Wilson.

“Dear Christopher, Robin’s death has been the greatest shock to me so that I can form some idea of what a horrible loss it will be to you to whom he was so close. I owed him a great deal – directly, as I have written in The Wild Garden, my first appearance in print, more indirectly one of the most stimulating, loyal and valuably critical friendships I can ever hope to know.

Robin was so rare a person for me – intensely interested in so many things I cared about, so awake to their relevance to each other, so not impatient but dismissive of all nonsense and cant. He was also a natural 19th century dandy – not the false kind that is so common to meet now. As a result one often had the curious feeling of hearing somebody witty and elegant who was able to speak out of two centuries at once – his own and France in the last century. He was so funny too and intensely aware of personal values and of the importance in them of shades of meaning.

His death has made me sadder than usual at such times because he has so often told me of his wish to live as long as possible and also because in the last years he was living with a certain agreeableness that must have been a delight to him.

I wonder if you ever saw him talking with me on tele about artists in novels. It was a very idiosyncratic performance and to those who knew him very endearing …”

(It was true. Robin’s life had never been happier. He had been working on two books: one about the German Romantic dramatist, Heinrich von Kleist, whose particular interest was the association of sex with death, and who committed suicide in 1811, and another book on dolphins, having visited, in 1958, a marina full of dolphins in Florida, as a result of being awarded a fellowship by the Ford Foundation to visit the US. When in New York he was surprised that no one would give him directions when he asked them in the street. His hostess looked at him disapprovingly. “Of course not,” she had said. “You are wearing a brown suit. They think you’re an artist.”)

But then Angus Wilson dropped his bombshell. “In the last two years Robin had also been made very much happier because of his friendship with Bobbie Holmes. I simply do not know how much you know about this so please forgive me if I tread where only angels should. But Bobbie whom I only know a little is a very simple, tho’ lively young man who made a lot of difference to Robin’s life. Robin had helped him to go to night school and to get out of a dead end tho’ entirely respectable existence. Forgive me if I cause offence by writing all this but I can only think at the moment of what Robin would have wished and I am sure he would have wanted you to contact Bobbie now when he is feeling so very lost.”

A lover! Bobbie Holmes was a complete shock to my father who had had no idea of his existence – and had no wish to know about anyway, Robin’s sexuality, whether it be straight, bi- or homosexual, being a subject of such taboo and embarrassment in our household that it was never even thought about, let alone talked about.

Homosexuality was, anyway, illegal at that time.

It turned out that the boy had been a waiter at Wheelers in Kensington, a branch of the fashionable fish restaurant, and that Robin had looked after him like a son. They had been planning to live together in a house in Gunter Grove when Robin died. I have a very faint memory of him coming round after the funeral for the first and last time when I was twenty-one, a pale and very naive young man with none of the social graces of my uncle. And yet Angus Wilson would not have written to my father about him unless they had been extremely close.

I seem to remember Bobbie was hastily hustled off the scene with a few measly mementoes and perhaps some small sum of money, never to be seen or heard of again. Although a few of Robin’s pictures are kept in museums, they’re rarely seen and most of them are in private collections. One of his friends keeps her picture hidden behind a door because she finds it so creepy. His was a strange, esoteric talent; he was an artist not of his time, but as a child of the ’sixties myself it is a privilege to be closely linked to a such rare and talented man who seemed more like a ghost from the nineteenth than of the twentieth century.