Ironside, Robin - The Gondolas of Delos

Sometimes the brothers worked together – Robin designing and Christopher executing…. “His contribution (and drawback) was that his ideas were not inhibited by any consideration or knowledge of how they could be realised in three dimensional terms,” wrote my father, who often became maddened by Robin’s lavishly impractical designs. “I had to take on this part of the work whether the design originated with him or me: but as there was a mutual, but unspoken, taboo against quarrelling. I would modify his work with impunity and he had no hesitation in altering mine. Sometimes a design drawing would go back and forth between us each trying to supply what the other couldn’t manage. What made him very difficult to work with was his perfectionism. I suffer from this badly enough, but with Robin it was maniacal. He found it almost impossible to meet a deadline. He consulted his doctor as to whether he might be cured or relieved of this perfectionism by hypnosis. The doctor said it was unlikely and that Robin would probably put the hypnotist unwittingly into a trance himself
Once when we were designing one of our stage design jobs we were already several hours behindhand for an appointment to deliver some work to the scene painters (and weeks behind time for the whole thing). We went by taxi (of course) and on the journey Robin was still painting a small bit of forest that showed through an open window on the set. On arrival at the studios, Robin continued to sit in the back of the cab painting away with a large drawing-board on his knee. I was hopping about out on the pavement counting my money as the clock on the taxi kept clicking up the fare and shouting at Robin: ‘For God’s sake stop! No one in the audience can possibly even see the bits you are now painting!’ This scene of urban bohemian life came to an end by my sweeping away the jar of paint water he’d brought with him in the cab and emptying it into the gutter.” 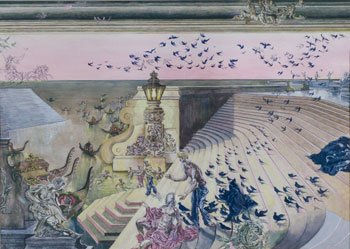