It was partly the fact that he was self-taught that made Robin’s pictures so original, and he wore his lack of formal training proudly as if it were a credit. He wrote:
“The best British painting relies, for its final justification, upon an amateur stimulus … upon a stimulus that may be ethical, poetic or philosophic but not a stimulus transmitted by any pure inflexible aesthetic perception of the external world.”
In his biographical notes to British Painting Since 1939, he announced various artists’ lack of training with the same fanfare as if they had received triple-firsts in draughtsmanship. Of Francis Bacon he wrote: “Largely self-taught.” Of Lucian Freud: “Mainly self-taught.” Frances Hodgkins: “Attended no art schools.” Victor Pasmore: “Attended no art schools.” Of Balthus he wrote (in Horizon in 1948) that “happily he was never a student at any art school. It is a modern commonplace that the poetic faculty cannot be acquired by study, yet, though painting has no agreed public functions, though the best modern painters have been concerned with communicating mysteries to initiates, and though the hermetic quality of fine art is not today wrapped in veils of equivocal intelligibility, intending painters are still encouraged to learn their art in schools. Here, at an age when they must be inclined to emulate in some degree the appointed authorities in their chosen profession, they may acquire some useful mechanical knowledge; but they will certainly be stuffed with precepts, portents, possibly in the minds of their teachers, but not necessarily of the slightest value elsewhere. Where it is a question of fine art as opposed to applied art, schools devoted exclusively to the training of painters for the production of works of art are of negligible, if not of ill-omened, significance.” 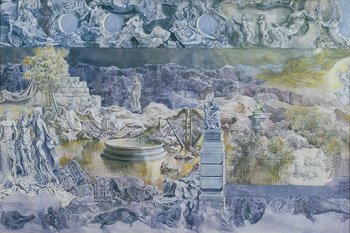