Wirth’s explanation runs to eight pages! But it a confused bundle of ideas he presents.  We have had to shorten the text to its essence.  Despite the fact Wirth accepted and wrote about the principal of contrasts, he appears to have a total aversion to a force he knows exists.  He defines it as the God supreme of the Elements, the Great Adversary.

All sorts of types of environmental influence are possible at this level - weather control for example.  They are normally shamanic gifts. 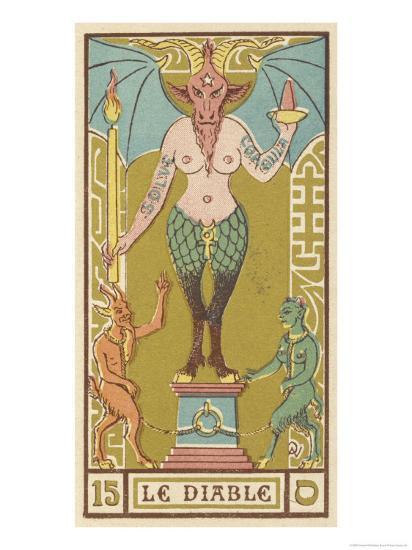 This Adversary (Satan in Hebrew) is the Prince of the material World ……. He is the one who differentiates, the enemy of unity. He sets the worlds against the World and living people against each other. ………………..

The Devil appears to us in the Tarot like Baphomet of the Templars, with a goat's head and legs, a woman's breasts and arms. This monstrous idol derives from the Goat of Mendes and of the bisexual Great Pan of the Gnostics. Like the Greek Sphinx, it draws together within itself the four Elements, of whom the Devil is the principle life-giver. Its black legs correspond to the Earth and to the spirits of the dark depths which the Gnomes of the Middle Ages represent and the Anounnaki, feared by the Chaldeans. The Undines, spirits of the water are recalled by the green scales which cover the monster's thighs whose blue wings are related to the Sylphs, powerful spirits of Air. As for the red head, it symbolizes the furnace where the Salamanders, the spirits of Fire find pleasure.

The Occultists are convinced of the existence of Spirits of the Elements. Magic teaches one to subjugate them, without hiding the dangers in the relationships which can be established between them and man.  The serious Adept is not ignorant of the fact that the Devil is the great magic agent, thanks to whom miracles are performed unless they are of the purely spiritual kind; for as long as pure spirit acts directly upon spirit, the Devil does not have to intervene.

But as soon as the body enters into it, nothing can be done without the Devil. We owe to him our material existence, for if the desire to be and the self preservation instinct which came from him, had not dominated us from birth, then we would not have been able to hang on to life with the exclusive egoism which is characteristic of early childhood.

The Devil well and truly possesses us when we come into the world and this must be so. But this possession is not lasting for we are destined to free ourselves little by little from the tyranny of our innate instincts. ….. The Devil is not as black as he is painted: he is our ineluctable associate in life in this base world. Let us not forget that it is the Devil who makes us live in the material sense.

In the last analysis it is the Devil who is at the service of God and does not let himself be used wrongly or mistakenly. If he provokes trouble, it is never of a lasting nature: his disorder is within order, and comes back to order, for the Devil is subject to the universal law of which Justice 8 assures the application…………….his arms are not tatooed in vain with the words:

He uses alternatively the little red devil and the little green devil which are attached by a rope to the gold ring fixed to the cubic altar on which Baphomet stands.