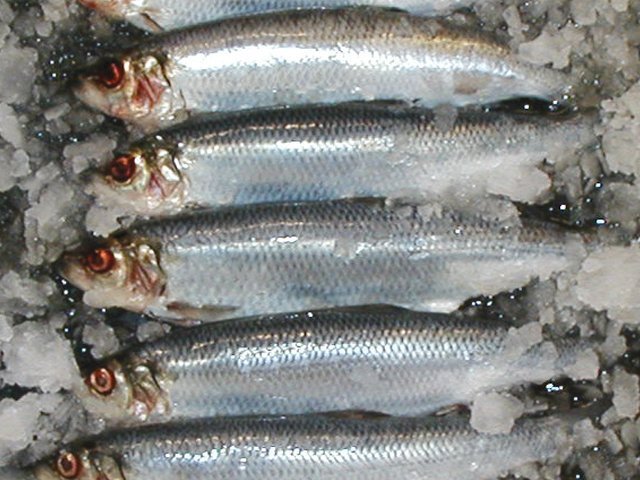 Herring are forage fish, mostly belonging to the family Clupeidae.

They often move in large schools around fishing banks and near the coast. The most abundant and commercially important species belong to the genus Clupea, found particularly in shallow, temperate waters of the North Pacific and the North Atlantic oceans, including the Baltic Sea, as well as off the west coast of South America.

Three species of Clupea are recognised, and provide about 90% of all herrings captured in fisheries. Most abundant of all is the Atlantic herring, providing over half of all herring capture. The herring is also found in India, in the Arabian sea, Indian ocean and Bay of Bengal.

The species of Clupea belong to the larger family Clupeidae (herrings, shads, sardines, menhadens), which comprises some 200 species that share similar features. These silvery-coloured fish have a single dorsal fin, which is soft, without spines. They have no lateral line and have a protruding lower jaw. Their size varies between subspecies: the Baltic herring (Clupea harengus membras) is small, 14 to 18 centimetres; the proper Atlantic herring (C. h. harengus) can grow to about 46 cm (18 inches) and weigh up 700 g (1.5 pounds); and Pacific herring grow to about 38 cm (15 inches).

At least one stock of Atlantic herring spawns in every month of the year. Each spawns at a different time and place (spring, summer, autumn and winter herrings). Greenland populations spawn in 0–5 metres (0–16 ft). North Sea (bank) herrings spawn at up to 200 metres (660 ft) in autumn. Eggs are laid on the sea bed, on rock, stones, gravel, sand or beds of algae.

Females may deposit from 20,000 up to 40,000 eggs, according to age and size, averaging about 30,000. In sexually mature herrings, the genital organs grow before spawning, reaching about one-fifth of its total weight. 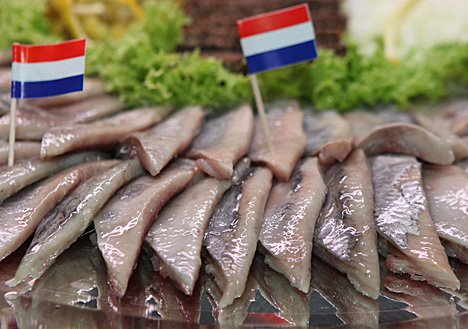 The eggs sink to the bottom, where they stick in layers or clumps to gravel, seaweeds or stones, by means of their coating mucus, or to any other objects on which they chance to settle.

The larvae are 5 to 6 millimetres (0.20 to 0.24 in) long at hatching, with a small yolk sac that is absorbed by the time the larva reaches 10 millimetres (0.39 in). Only the eyes are well pigmented. The rest of the body is nearly transparent, virtually invisible under water and in natural lighting conditions.  At one year they are about 10 centimetres (3.9 in) long, and they first spawn at three years. 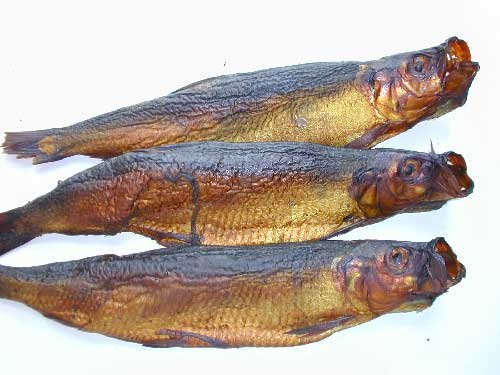 Herring has been a staple food source since at least 3000 B.C. There are numerous ways the fish is served and many regional recipes: eaten raw, fermented, pickled, or cured by other techniques, such as being smoked as kippers.

Herring are very high in the long-chain Omega-3 fatty acids EPA and DHA. They are a source of vitamin D.

Water pollution influences the amount of herring that may be safely consumed. For example, large Baltic herring slightly exceeds recommended limits with respect to PCB and dioxin, although some sources point out that the cancer-reducing effect of omega-3 fatty acids is statistically stronger than the cancer-causing effect of PCBs and dioxins. The contaminant levels depend on the age of the fish which can be inferred from their size. Baltic herrings larger than 17 cm may be eaten twice a month, while herrings smaller than 17 cm can be eaten freely. 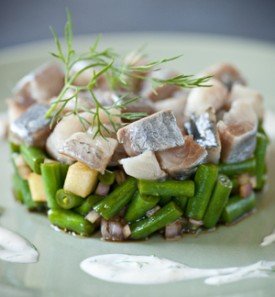