Giorgio Vasari: The Mutilation of Uranus by Saturn (Cronus)

(ll. 164-166) `My children, gotten of a sinful father, if you will obey me, we should punish the vile outrage of your father; for he first thought of doing shameful things.'

(ll. 167-169) So she said; but fear seized them all, and none of them uttered a word. But great Cronos the wily took courage and answered his dear mother:

(ll. 170-172) `Mother, I will undertake to do this deed, for I reverence not our father of evil name, for he first thought of doing shameful things.'

(ll. 173-175) So he said: and vast Earth rejoiced greatly in spirit, and set and hid him in an ambush, and put in his hands a jagged sickle, and revealed to him the whole plot.

(ll. 176-206) And Heaven came, bringing on night and longing for love, and he lay about Earth spreading himself full upon her .

Then the son from his ambush stretched forth his left hand and in his right took the great long sickle with jagged teeth, and swiftly lopped off his own father's members and cast them away to fall behind him. And not vainly did they fall from his hand; for all the bloody drops that gushed forth Earth received, and as the seasons moved round she bare the strong Erinyes and the great Giants with gleaming armour, holding long spears in their hands and the Nymphs whom they call Meliae all over the boundless earth. And so soon as he had cut off the members with flint and cast them from the land into the surging sea, they were swept away over the main a long time: and a white foam spread around them from the immortal flesh, and in it there grew a maiden. First she drew near holy Cythera, and from there, afterwards, she came to sea-girt Cyprus, and came forth an awful and lovely goddess, and grass grew up about her beneath her shapely feet. Her gods and men call Aphrodite, and the foam-born goddess and rich-crowned Cytherea, because she grew amid the foam, and Cytherea because she reached Cythera, and Cyprogenes because she was born in billowy Cyprus, and Philommedes because sprang from the members. And with her went Eros, and comely Desire followed her at her birth at the first and as she went into the assembly of the gods. This honour she has from the beginning, and this is the portion allotted to her amongst men and undying gods, -- the whisperings of maidens and smiles and deceits with sweet delight and love and graciousness. 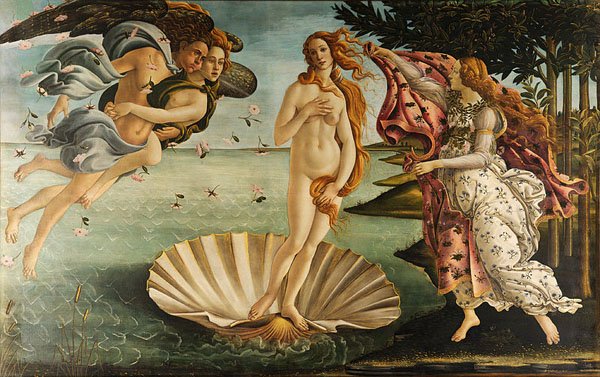