Despite the regard in which he was held by the Venetians, Dürer returned to Nuremberg by mid-1507, remaining in Germany until 1520. Between 1507 and 1511 Dürer worked on some of his most celebrated paintings and woodcuts.  In 1513 and 1514, Dürer created his three most famous engravings: Knight, Death, and the Devil, St. Jerome in his Study, and Melencolia I (both 1514).

In order to understand Melencholia, which is so full of symbols it is almost overwhelming, it is important to understand the enormous influence alchemy must have had on Durer.

After completing his term of apprenticeship, Dürer followed the common German custom of taking Wanderjahre—in effect gap years —in which the apprentice learned skills from artists in other areas.  In this time he stayed with 'goldsmiths' - another word for an alchemist - someone able to turn lead into gold - metaphorically of course.

He went to a great many places where alchemy was in full swing. In Colmar, Dürer was welcomed by Schongauer's brothers, the goldsmiths Caspar and Paul and the painter Ludwig. In early 1492 Dürer travelled to Basel to stay with another brother of Martin Schongauer, the goldsmith Georg. Very soon after his return to Nuremberg, on 7 July 1494, at the age of 23, Dürer was married to Agnes Frey following an arrangement made during his absence. Agnes was the daughter of a prominent "brass worker" (and amateur harpist) another alchemist.

Twenty years later and he gives the impression that the final goals of the spiritual path were still eluding him.  Away in the distance lay the rainbow and the Sun was still far away.  And there had been no ascension - he was still at the bottom of the ladder.  But was he?

This picture is about what it is like not to succeed, it does not mean he did not succeed.  In fact he would not have known all these symbols if he had not gone a great deal further than this along the path.

In other words, for Durer, melancholy is what you feel when you have failed in your destiny. 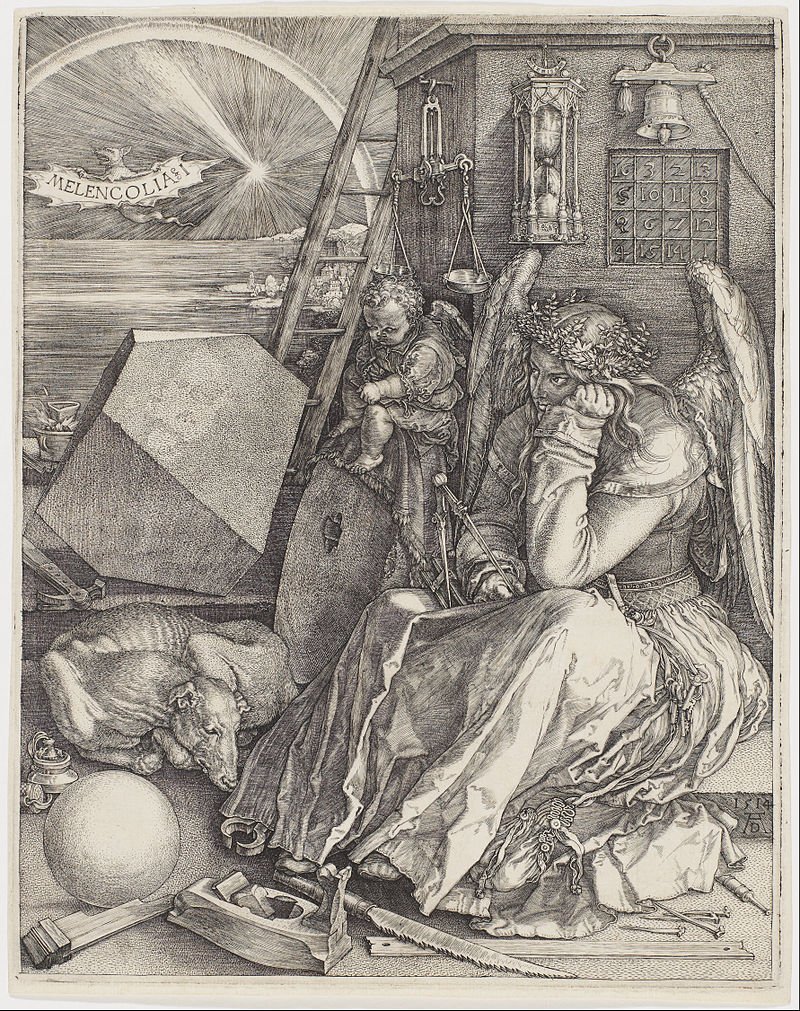