Energy is recycled as part of the ongoing process of Creation and Destruction.

Both are important obviously and there is thus implied a sort of recycling of energy that takes place.

The Yin Yang symbol shows this flow of spiritual energy – input and output.

The Yang symbol is the 'masculine active principle' - active only in the sense that it is we who send all this energy back  - output it - with our thoughts and perceptions.

The Yin symbol shows the 'feminine passive principle' – and again passive only in the sense that this time we receive it passively. 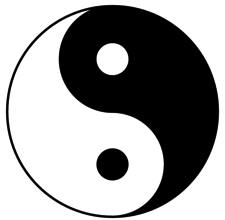 The Yin Yang symbol is shown here, the circle is bisected by a sigmoid line.  The light half represents the Yin force, and the dark the Yang force, however, each half includes an arc cut out of the middle of the opposing half to symbolise that “every mode contains within it the germ of its antithesis” or to put it more simply the spiritual energy is the same all the time it just has lots of different forms – sometimes it is input sometimes it is output.  The sigma is the separator between input/output, but it especially shows that the energy cycles round – it is received by us as input and goes back up to ‘heaven’ as output in a cycle of continual motion.

Black Yang masculine spiritual energy in the form of output ‘rises’ and is therefore described as ‘hot’ or ‘warm energy’ – all allegorical this, it is intended to help to describe the flow of energy.  As it ascends it allegorically turns into clouds – vapour. 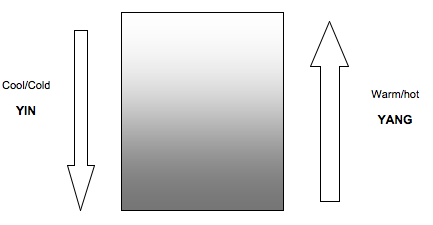 One of the characters used in the Shuwen to describe the creative descending force is YUAN.  Its character looks much like the pi symbol with an extra line over the top.

The line above means ‘that descending from heaven’.  The bottom symbol represents ‘goodness’ descending.  It thus tries to give the idea of new and rejuvented software and hardware templates being downloaded to restore and repair the damaged body.

The Qi is continually active in a person [or any life form] because there is this cyclical activity always happening:

From the Huangdi Neijing Treatise Seventeen. Discussions on the Essential and Finely Discernible Aspects of the Pulse
The Yellow Thearch inquired: "How is an examination of the pulse done?"
[Minister] Qibo answered: "The examination is usually at dawn. The yin qi has not yet stirred, the yang qi has not yet dispersed, food and drink have not yet been taken, the channel vessels are not yet overly active, the network vessels are harmonious and stable, and the qi and blood are not yet disordered -- thus, for these reasons, an abnormal pulse can be detected.

As you can see the Yin and Yang energy will be perpetually changing with anybody.  But it is possible for the energy to be ‘unbalanced’ or for it to have been ‘interrupted’.  The Chinese medicine books say that this is when pathological symptoms arise.  In effect, you are physically ill.

If we look at this in terms of the computer analogy, we are either not getting rid of all the software that needs to be deleted, or we have ‘bugs’ that haven’t been repaired or [ironically enough] viruses that haven’t been repaired, or our software has been corrupted in some way and the repairs aren’t able to get through – so the Yin is being blocked, for example, or the Yang isn’t able to get away properly.

Again the physical symptoms of blockage in whatever direction seem to be strangely logical.  Too much input, for example, can give you physical diarrheia  and too little output can give you constipation.

As we saw earlier in the diagram, the ‘cool’ qi descends, whereas the ‘warm’ qi ascends.  Remember that the terms are generally symbolic of what is happening.  Interestingly enough, however, it is noticeable that the effect of this happening on the body is not just symbolic it can be felt in real temperature shifts.  You can feel extreme cold when having acupuncture and being ‘repaired’.  Similarly some people experience extreme heat when there is a lot of activity going both in the memory and during activity execution of the software.  There may also be a real and tangible effect [again a software one] when we get a ‘fever’, possibly as alien cells are killed.