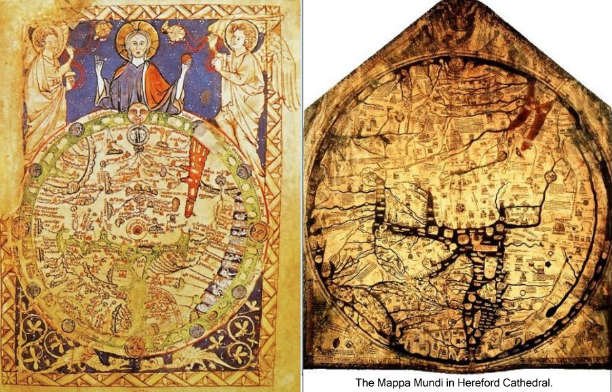 The World Map is a spiritual map, attempting to show the layout of the Egg, an early version of which was called a T-O map.  Generally speaking the majority of 'views' were as though one were positioned outside the Egg looking at the surface.

I have provided my own version of the Map of the Egg as best I can deduce it, but all the maps I have as observations are similar attempts.

An attempt at a physical geographic map has none of these things, it will attempt to be rectangular, it will show scale and distance, there will be no spiritual symbols, places will be shown as places not as symbols [castles, mounds , mountains etc].  It will also generally show North at the top.  A spiritual map shows East – the Orient at the top for the reason I explained in the section on the Hourglass – you orient yourself through the central pole of the egg and the orient is where the Creator and Created are.