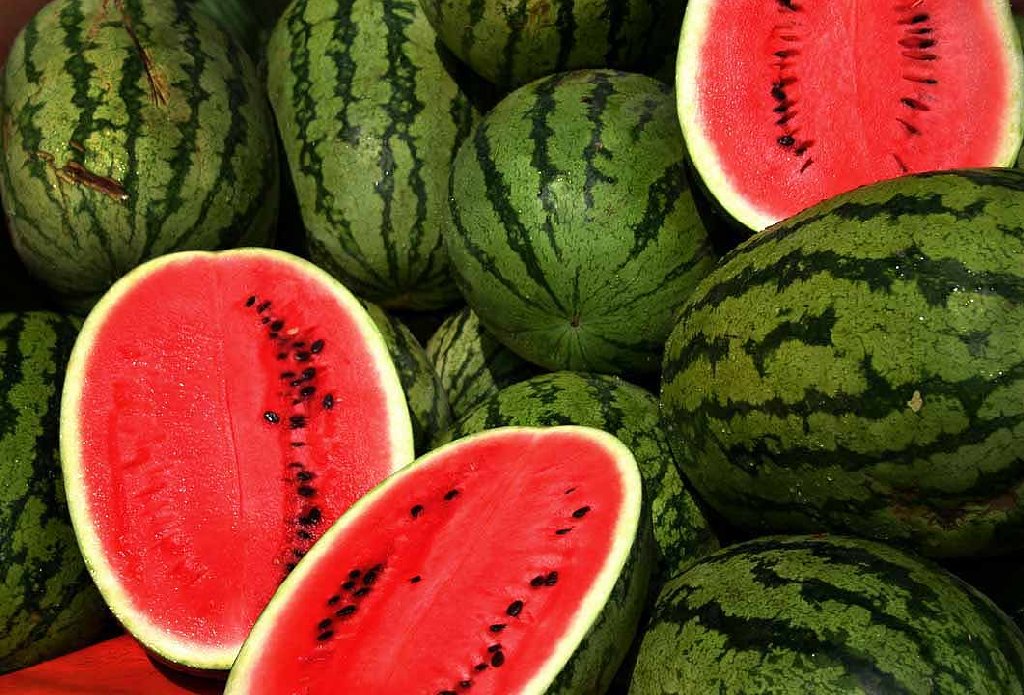 It is a large, sprawling annual plant with coarse, hairy pinnately-lobed leaves and white to yellow flowers. It is grown for its edible fruit, also known as a watermelon, which is a special kind of berry referred to by botanists as a pepo. The fruit has a smooth hard rind, usually green with dark green stripes or yellow spots, and a juicy, sweet interior flesh, usually deep red to pink, but sometimes orange, yellow, or white, with many seeds. 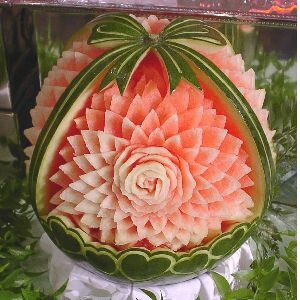 The watermelon is thought to have originated in southern Africa, where it is found growing wild.  It reaches maximum genetic diversity there, with sweet, bland and bitter forms.

In the 19th century, Alphonse de Candolle considered the watermelon to be indigenous to tropical Africa. Citrullus colocynthis is often considered to be a wild ancestor of the watermelon and is now found native in north and west Africa.

Evidence of its cultivation in the Nile Valley has been found from the second millennium BC onward. Watermelon seeds have been found at Twelfth Dynasty sites and in the tomb of Pharaoh Tutankhamun. Watermelon is also mentioned in the Bible as a food eaten by the ancient Israelites while they were in bondage in Egypt. 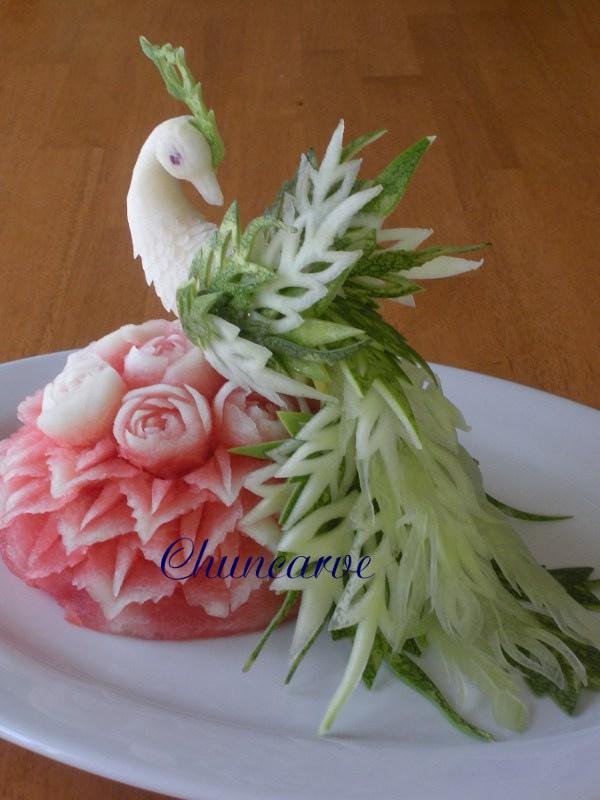 In the 7th century, watermelons were being cultivated in India and by the 10th century had reached China, which is today the world's single largest watermelon producer.

Moorish invaders introduced the fruit into Europe and there is evidence of it being cultivated in Córdoba in 961 and also in Seville in 1158.

It spread northwards through southern Europe, perhaps limited in its advance by summer temperatures being insufficient for good yields.

The fruit had begun appearing in European herbals by 1600, and was widely planted in Europe in the 17th century as a minor garden crop.

European colonists and slaves from Africa introduced the watermelon into the New World. Spanish settlers were growing it in Florida in 1576, and it was being grown in Massachusetts by 1629, and by 1650 was being cultivated in Peru, Brazil and Panama as well as in many British and Dutch colonies. Around the same time, Native Americans were cultivating the crop in the Mississippi valley and Florida. Watermelons were rapidly accepted in Hawaii and other Pacific islands when they were introduced there by explorers such as Captain James Cook. 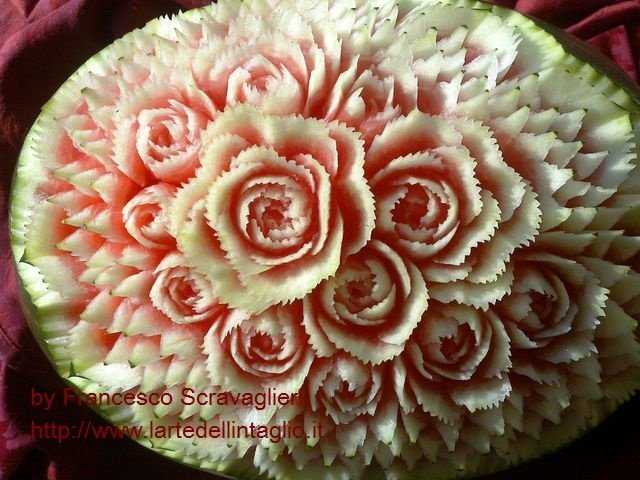 What is fascinating about the history of the watermelon from that point on is that selective breeding has changed the nutritional value of subsequent varieties.

The old strains of water melon are said to be rich in Vitamins A and C, minerals, and contain malic acid, an important chelating agent.  The new varieties do not seem to be the same.

Much research effort has been devoted in the USA to breeding disease-resistant varieties with large yields, and into developing a seedless strain or at least a breed with less seeds.  The result, if we glance at the chart below produced by Dr Duke – who is USA based – is a water melon with no malic acid and no Vitamin C.  In fact its Vitamin content is quite low. Nowadays a large number of cultivars are available in the USA, many of them producing mature fruit within 100 days of planting the crop. It appears however, that nutritionally, the resulting fruit is inferior to that produced elsewhere. 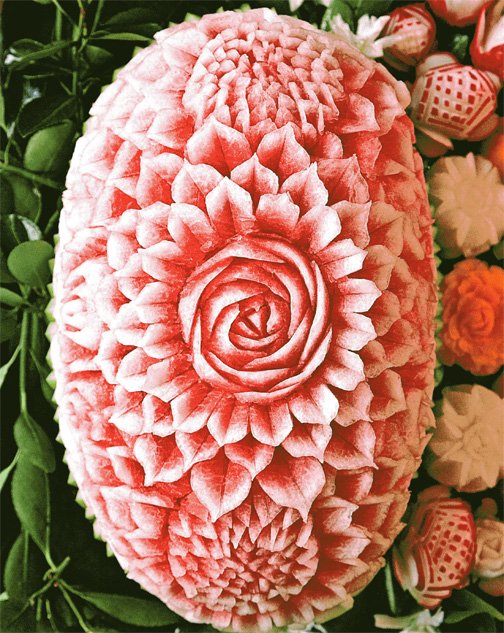 The breeding programmes introduced by American horticulturists appear to have been based almost entirely on the demands of the growers - yield and ease of shipment and storage.

Charles Fredric Andrus, for example, a horticulturist at the USDA Vegetable Breeding Laboratory in Charleston, South Carolina in 1954, bred "that gray melon from Charleston".  Its oblong shape and hard rind made it easy to stack and ship. Its adaptability meant it could be grown over a wide geographical area. It produced high yields and was resistant to the most serious watermelon diseases.  What it tasted like and nutritionally how it fared is not reported.

Subsequent programmes based on hybridisation were also based on “ higher yields, and attractive appearance”.  Again not taste or nutritional value.  Today, farmers in approximately 44 states in the United States grow watermelon commercially. Georgia, Florida, Texas, California and Arizona are the United States' largest watermelon producers. This now-common fruit is often so large that groceries in the USA often sell half or quarter melons. The largest recorded fruit was grown in Tennessee in 2013 and weighed 159 kilograms (350.5 lbs). 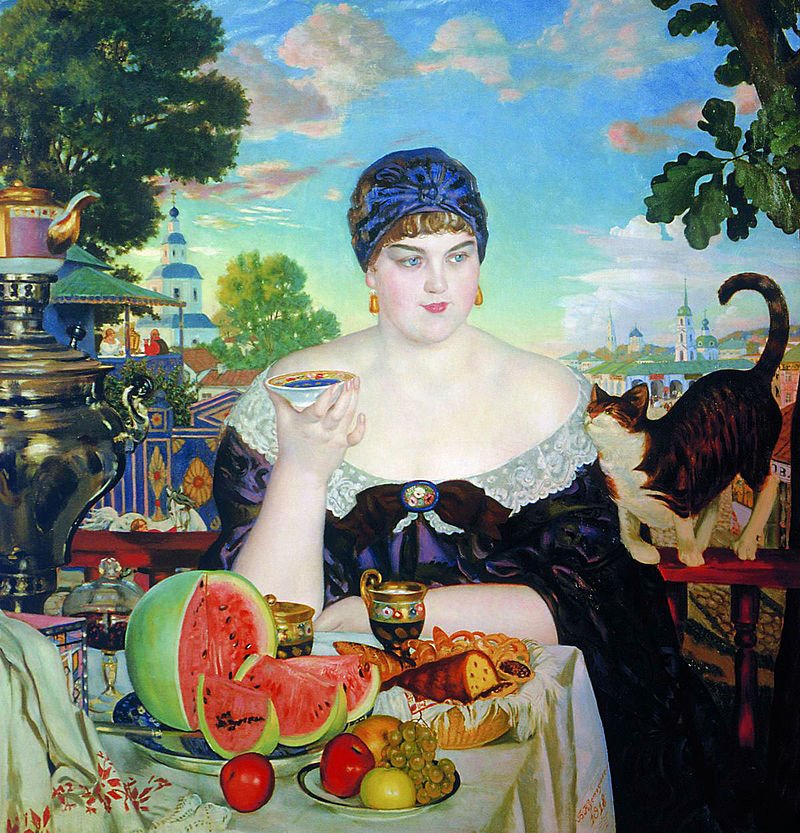 The table below shows the contents of the fruit and seeds.

The information comes from Dr Duke’s Plant database. Where a chemical has no recorded activity it is excluded from the following list.  Dr Duke’s database should be referenced for more and up-to-date details.

Minerals are shown in BLUE.  The ones not present in the fruit are:

Vitamins are shown in GREEN.  Some essential vitamins are present in the fruit, but many are absent

Fatty acids - Two fatty acids are essential for human beings – ALA and LA – and only LA is present. Shown as PINK

Essential amino acids - and conditionally essential amino acids  are shown in YELLOW.  The fruit is very rich in Eaas.  The only EAA not present in the fruit is Proline.  But, Hydroxyproline is present, an amino acid which is normally produced in the body by hydroxylation of the amino acid proline.   Hydroxyproline comprises roughly 4% of all amino acids found in animal tissue, an amount greater than seven other amino acids that are translationally incorporated and Hydroxyproline is a major component of the protein collagen. Both Hydroxyproline and proline play key roles for collagen stability.  Collagen, in the form of elongated fibrils, is mostly found in fibrous tissues such as tendons, ligaments and skin. It is also abundant in corneas, cartilage, bones, blood vessels, the gut, intervertebral discs and the dentin in teeth.  In effect it is an essential body repair and building substance. 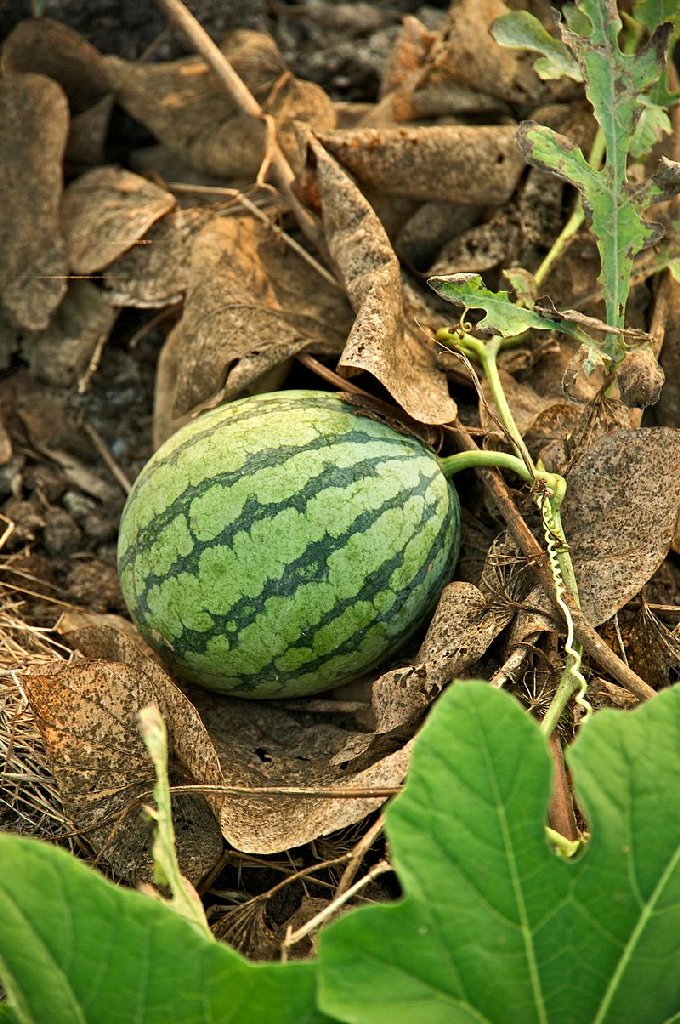 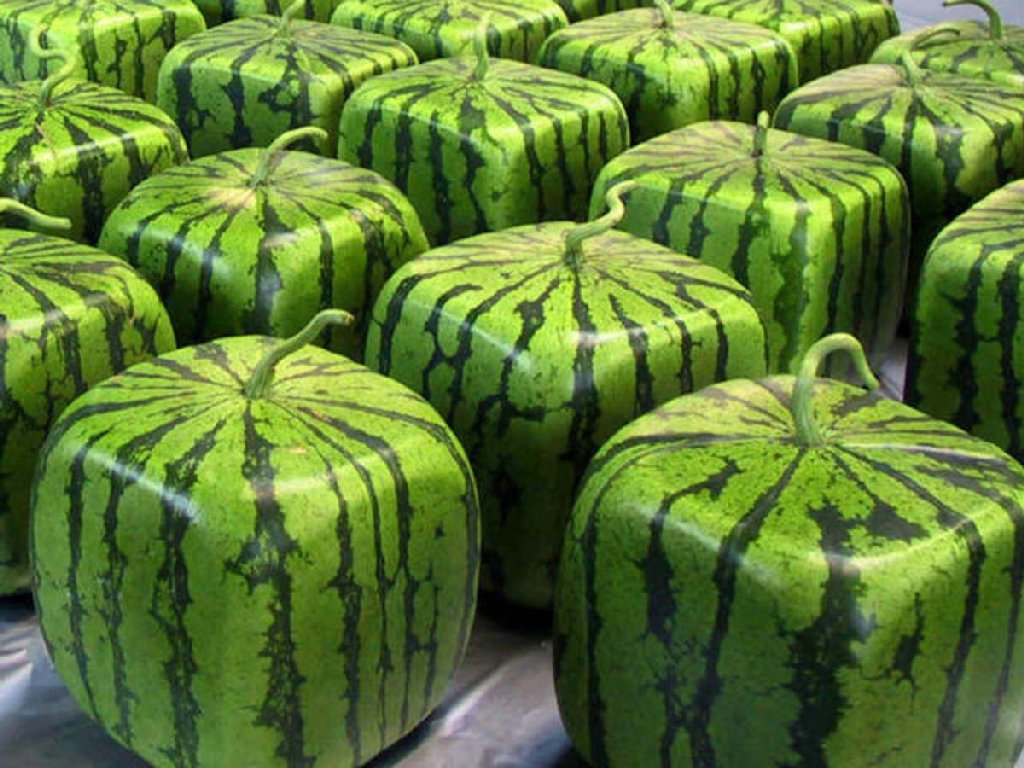 Information is also provided for the seeds, which one would normally spit out.  And it appears that it is a good idea to spit them out, in the USA at least,  for in any large quantities they would end up being slightly poisonous.  The seeds contain a number of chemicals designed to protect them from insects, fungus and other pests, but as a consequence they would be irritant if consumed in quantity. 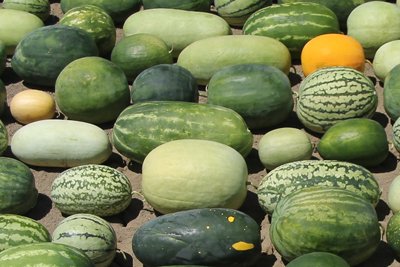 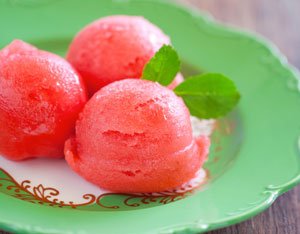 Watermelon is one fruit that can simply be consumed as it is, although watermelon sorbet is delicious, particularly if made with grenadine syrup as a sweetener.  Crushed it also makes a very pleasant refreshing drink.

Some older variety Watermelon rinds are also edible, they are stewed, stir fried and are used for making pickles..

And people consume the seeds. 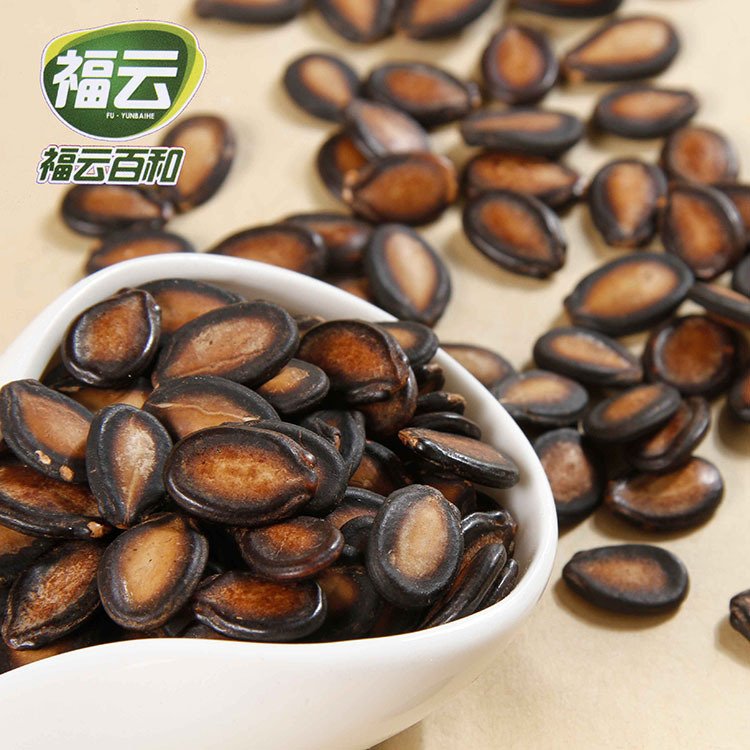 This has again led us to wonder whether the breed of watermelon produced in the USA has seeds different in composition to those in countries where the older breeds are still used.

Certainly, in China there are no reports of people suffering from consumption of the seeds and they are eaten like almonds, being consumed with other seeds at Chinese New Year celebrations.

Speculatively, has the reduction in the number of seeds in USA water melons resulted in the concentration by the plant of the more toxic elements into the few remaining seeds in order that the small number of seeds that remain, remain viable? 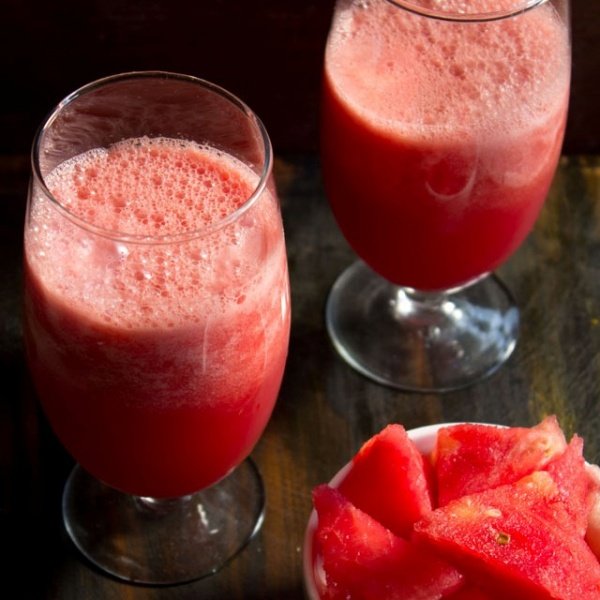 Watermelon juice can be made into wine, on its own or blended with other fruits.