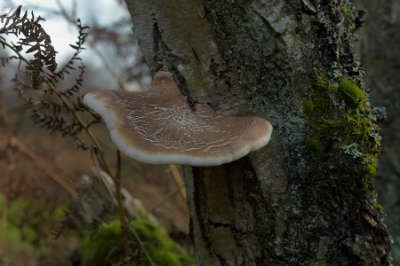 A mushroom (or toadstool) is the fleshy, spore-bearing fruiting body of a fungus, typically produced above ground on soil or on its food source.

The name "mushroom" is often applied to the cultivated white button mushroom, Agaricus bisporus; as though this was the only mushroom, but this is ignoring the thousands of other mushrooms – a large number of which are edible and nutritionally and medicinally of more importance.

It is worth noting that separating mushrooms into edible and medical mushrooms is a little meaningless as many of the common edible species have therapeutic properties and several used for medical purposes are also edible. 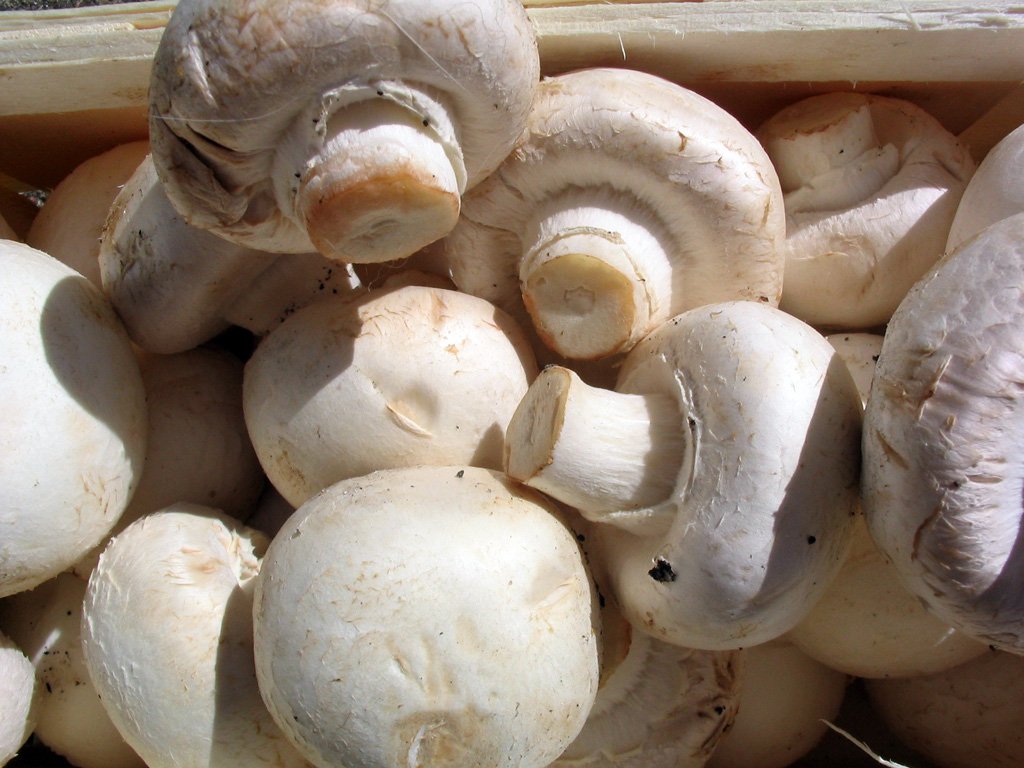 China is the biggest commercial grower of mushrooms, however, this area is not one dominated by commercial growers, for good reason, as wild mushrooms are often more important for their nutritional and pharmacological properties.

But of course they have to be treated with respect.  You need to know your mushrooms.  It is also clear that they are better fresh.  Air dried they lose a small amount of potency.  Oven dried and they can lose almost all their potency medicinally.  Although the explanations for this vary, the more obvious one is that the healing chemicals are volatile and easily driven off by heat. 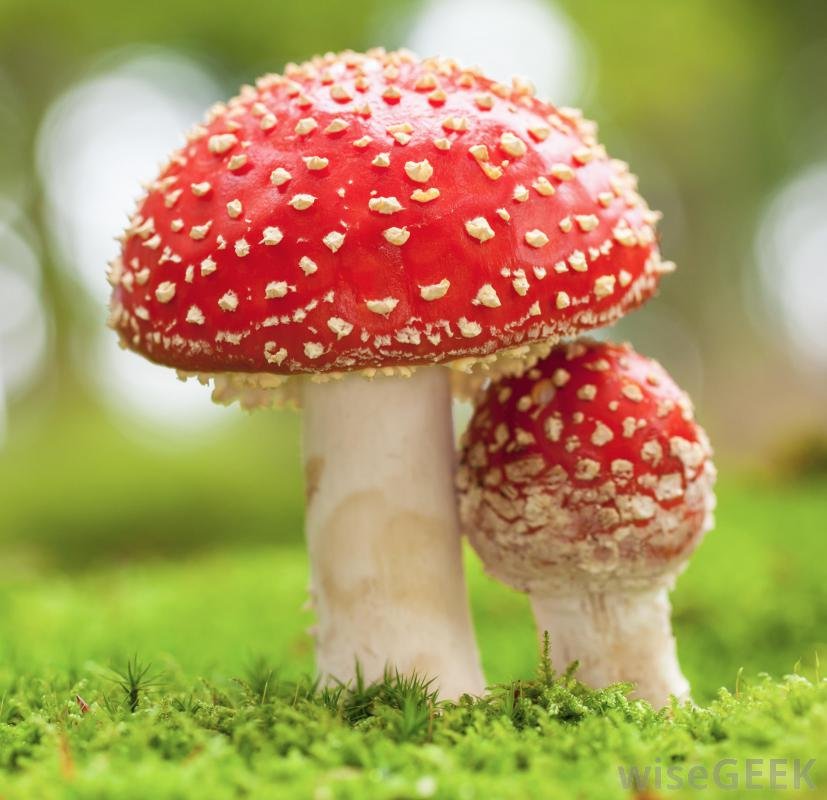 The term "toadstool" was often, but not exclusively, applied to poisonous or semi-poisonous fungi.

And to understand what a toadstool is and a mushroom you need to know your symbolism.

Toads are the opposite symbolically to frogs. 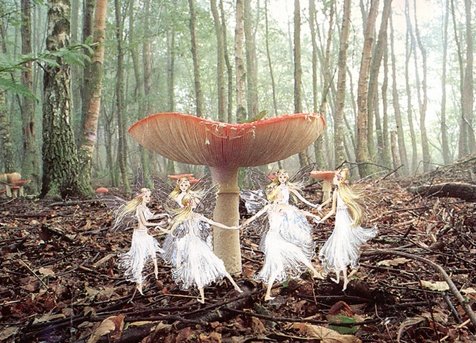 Thus they are potential magicians or, more dramatic, sorcerors.

By association, therefore a toadstool is any fungi used in the practises of sorcerors.  They tended to be quite dangerous fungi, as they were used to provoke out of body experiences or perhaps more nastily to accompany their use of the death prayer.

The term Toadman was also once in general use.  It described a person who, despite their dark nature, had the ability to enable others to have spiritual experiences.  The experiences they could help you with were often none too pleasant, but as the holders of the elixir of the hallucinogenic trip, they were often a necessary first stop for those people who wanted to be shamans. 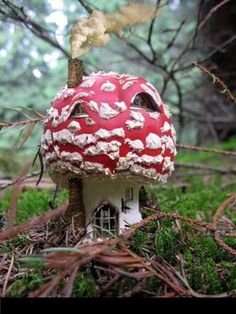 And again the fungi they used were toadstools and not mushrooms.

If we are being symbolically correct, the Amanita Muscari mushroom is in fact a toadstool.

Mushrooms have been a major source of food for millenia.  The ancient Greeks believed that mushrooms provided strength for their warriors in battle, and the Romans called them the “Food of the Gods.” For centuries, the Chinese have used them by both including them in their medicinal arsenal, but also eating them as an “elixir of life.”

But they have been oddly neglected when it comes to analysing their content.  Whilst plants have been analysed in considerable detail as can be seen from Dr Duke’s phytochemical database, fungi as a group seem to have been almost ignored.  This is despite the fact that they are a very valuable food. For a vegetarian they are an essential source of nutrients. 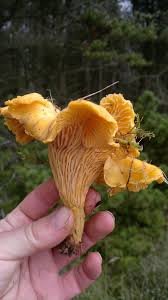 Edible mushrooms are a good source of protein, 200–250 g/kg of dry matter; amino acids – for example, leucine, valine, glutamine, glutamic and aspartic acids. Some contain linoleic,  oleic and palmitic fatty acids. Many contain essential minerals such as potassium, phosphorus, magnesium, calcium, copper, iron, and zinc.  There are also some quite interesting chemicals whose properties are still being investigated – like chitin, which is being studied for its effects on collagen.

Some mushrooms are also a good source of vitamins with high levels of riboflavin (vitamin B2), niacin, folates, and traces of vitamin C, B1, B12, D and E. Mushrooms are one of the very few non-animal food sources that contains vitamin D and hence they provide a useful natural vitamin D souce for vegetarians.

They are chelating agents.  If grown in pollution free ground, they have the potential to chelate us of heavy metals such as cadmium, lead and mercury.  Grown in polluted ground they are bioremedial, and immensely important bioremedial agents of difficult to clean land like forests or woodland. 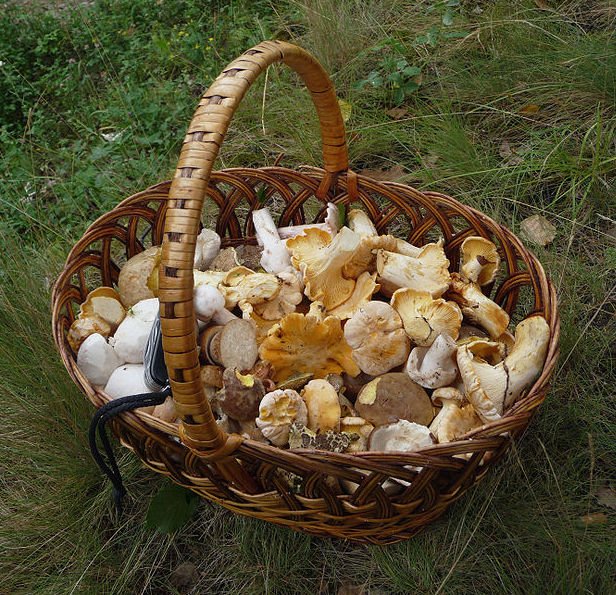 They also have antibacterial activity, antiviral activity and anti-parasitic activity, which is only just beginning to be explored.  Many act on the parasympathetic nervous system to promote relaxation and it is clear that some of their healing potential is mediated by this relaxing effect, the body is relieved of stress and the immune system can get to work.

The USDA nutrients database does not have an adequate analysis of mushrooms in general, relying understandably on commercial products, which are not a reflection of either the sheer variety of edible mushrooms that exists or their true nutritional potential.  Many mushrooms sold dried in the USA have been oven dried and thus have lost much of their medicinal and nutritional value.

Dr Duke’s Phytochemical database is principally based on an analysis of plants and not fungi, as such there is sadly no one database to which one can turn to get a complete picture.  According to researchers at the Centro de Investigación y de Estudios Avanzados in Mexico [see references], 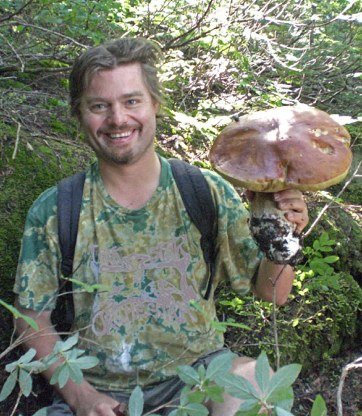 More than 100 medicinal functions are produced by mushrooms and fungi and the key medicinal uses are antioxidant, anticancer, antidiabetic, antiallergic, immunomodulating, cardiovascular protector, anticholesterolemic, antiviral, antibacterial, antiparasitic, antifungal, detoxification, and hepatoprotective effects; they also protect against tumor development and inflammatory processes. Numerous molecules synthesized by macrofungi are known to be bioactive, and these bioactive compounds found in fruit bodies, cultured mycelium, and cultured broth are polysaccharides, proteins, fats, minerals, glycosides, alkaloids, volatile oils, terpenoids, tocopherols, phenolics, flavonoids, carotenoids, folates, lectins, enzymes, ascorbic, and organic acids, in general. Polysaccharides are the most important for modern medicine and β-glucan is the best known and the most versatile metabolite with a wide spectrum of biological activity.

For reasons that completely elude us the commercial, so called ‘alternative medicine’ community now sell ‘mushroom extracts’ as dietary supplements for their medicinal use, claiming ‘enhancement of immune function’ and ‘antitumor activity’.  If you take these as opposed to having a delicious meal of fresh mushrooms, you are completely loony. 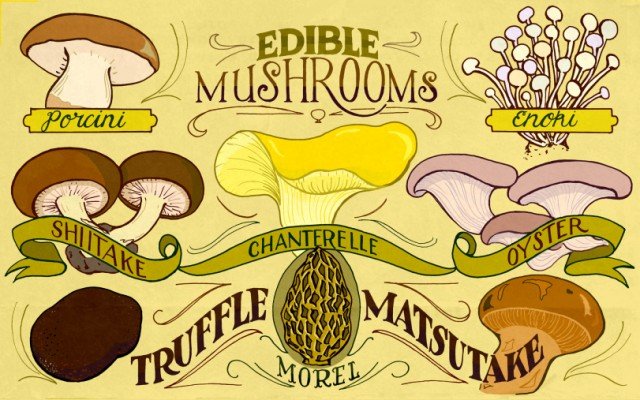 In order to see the very specific constituents and medicinal activity of each type of mushroom, then follow the links.  In this section we have grouped together observations that are more general in their findings and apply to mushrooms as a whole.

Basidiomycota -  The puffball is a member of any of a number of groups of fungus in the division Basidiomycota.   They are called puffballs because a cloud of brown dust-like spores is emitted when the mature fruiting body bursts.  They are edible, tasty when not too large, but care must be taken and the description - in the overload section - explains why. 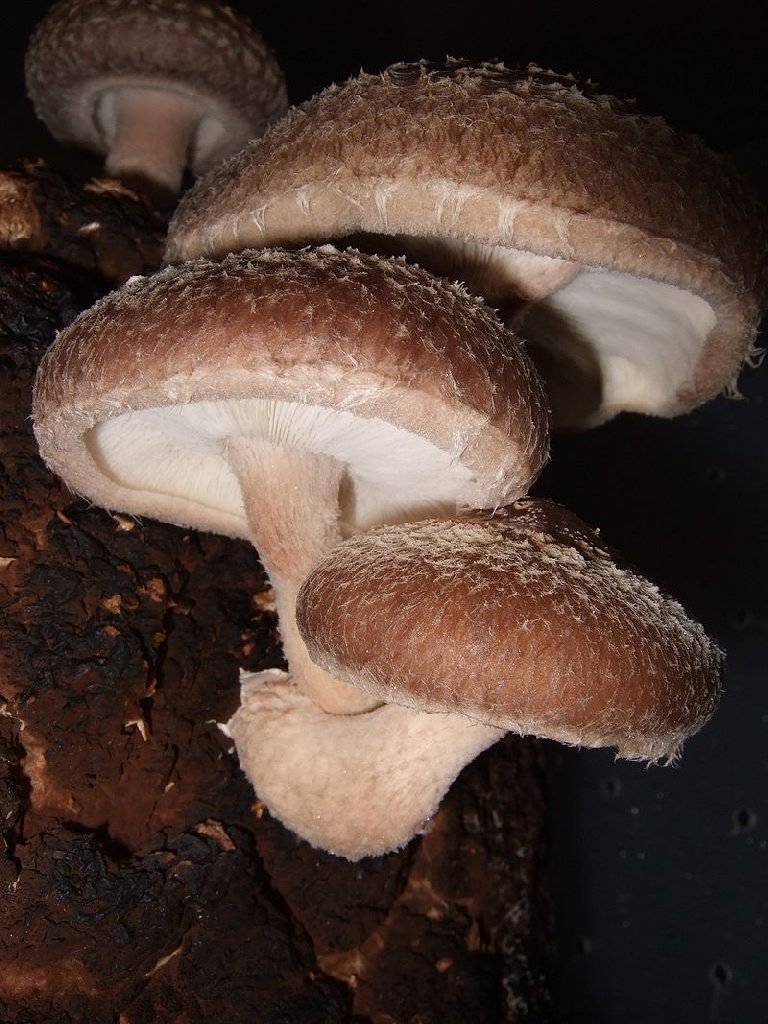 Boletus edulis  - commonly known as the porcini mushroom, penny bun, porcino or cep, is a basidiomycete fungus, and the type species of the genus Boletus.  It is edible, delicious and highly nutritious with some suprising activities.

A lectin from A. bisporus and a protein from A. polytricha have been found to be potent immunostimulants.
A. blazei is an edible mushroom native to Brazil which has been cultivated especially in Japan, where it is known as the “sun mushroom.”  This latter mushroom has been attracting quite a bit of interest from researchers investigating its medicinal properties.  It can be used in soups and mild stock based dishes.
A. subrufescens is called the “almond mushroom” for its almond taste, and it is cultivated in the US. It is being promoted as “a medicinal food for the prevention of cancer, diabetes, hyperlipidemia, arteriosclerosis, and chronic hepatitis”! The bioactive compounds isolated from this mushroom are mainly based on polysaccharides such as riboglucans, β-glucans, and glucomannans. 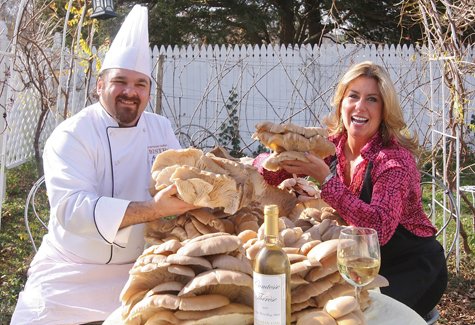 Lentinus  - L. edodes or “shiitake mushroom” is a widely used and recognised mushroom with a delicious taste and medicinal properties. It has been investigated for its activities for many years and research has also been aimed at trying to isolate some compounds for pharmaceutical use, though why this is being done when the mushroom is delicious, inexpensive in its natural habitat and versatile in a culinary sense is beyond us.
It is only when you can't eat it, but there are important chemicals in a plant that extraction may be useful.  Given the delicacy of this mushroom, it really needs to be eaten fresh, but failing that freezing in such a way that all the chemicals are preserved in a thick, stock based, soup puree for example.

Another edible mushroom in this family is L. polychrous, found in northern and north-eastern Thailand.  It is used medicinally in that area for  dyspepsia or “envenomation caused by snakes or scorpions”. One rather fascinating snippet of information, however, is that it also appears to be a phytoestrogen with antiestrogenic activity. 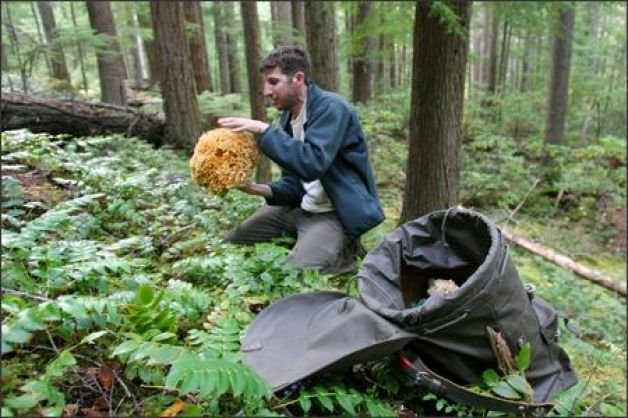 Pleurotus This genus, also known as the oyster mushrooms, has approximately 40 species.  In addition to their nutritional value, they too possess medicinal properties, one key one of which is anti-inflammatory activity.  Yet again, most of the very useful activity seems to revolve around their anti-viral and anti-bacterial properties – their ability to fight pathogens.  A number are chelation agents.
Within this family Pleurotus giganteus has been described as an ‘outstanding culinary mushroom’ with ‘superlative sensory properties’[tastes nice]. This mushroom somehow proves you can have your cake and eat it [if you will excuse the mixed metaphors] because it is nutritionally outstanding too.   It is rich in minerals like magnesium (67.64 mg/100 g dry weight) and potassium (1,345.7 mg/100 g dry weight).

Ganoderma - Ganoderma is a genus of polypore mushrooms that contains one of great interest - Ganoderma lucidum - the “mushroom of immortality,” commonly known as Lingzhi or Reishi.  Reishi is edible in the sense that it is not poisonous, but is not food.  Instead it has been used in traditional Chinese medicine for thousands of years and is one of the most popular medicinal mushrooms in China, Japan, and Korea.
It has been the subject of some intensive modern biochemical and pharmacological research over the past few decade,s and modern pharmacological tests have demonstrated that the use of this fungi was justified.

Others - There are obviously others, and we will add to this list in due course as more information becomes available to us.