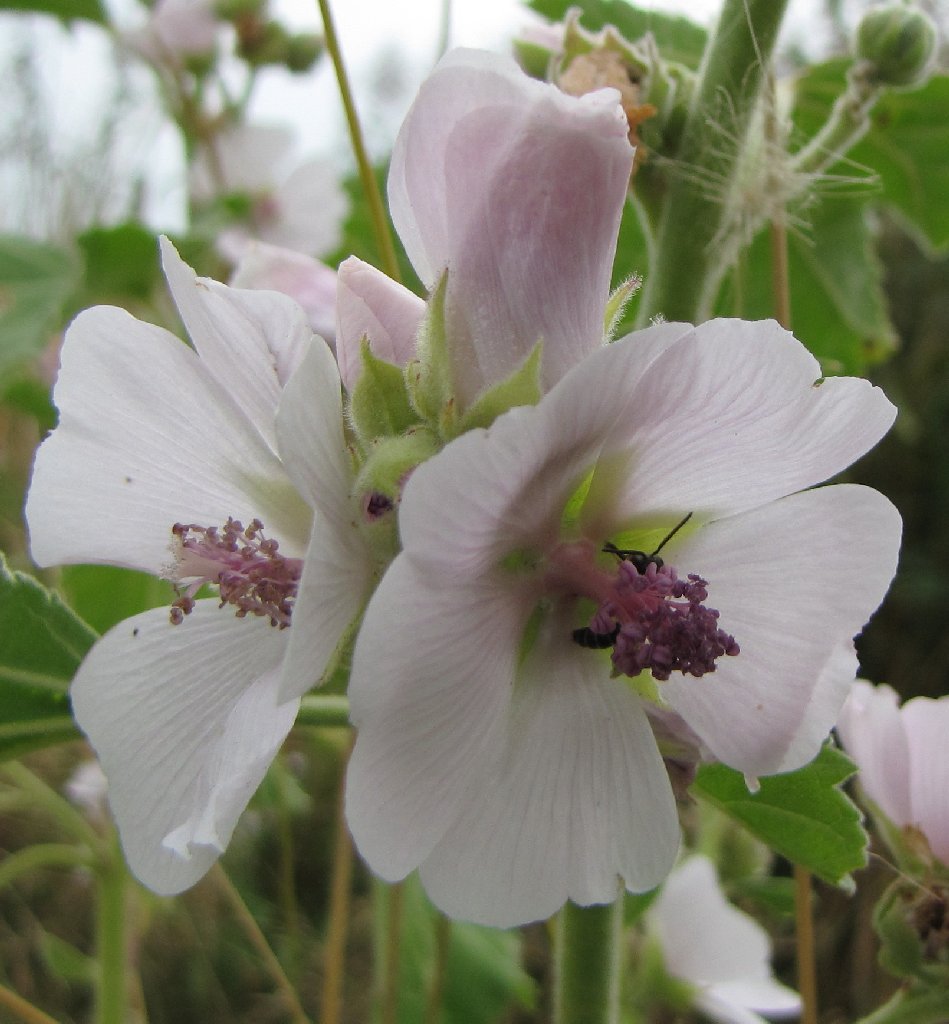 Althaea officinalis (marsh-mallow, marsh mallow, or common marshmallow) is a perennial species indigenous to Europe, western Asia, and North Africa, which is used as a medicinal and ornamental plant.

A confection has been made from the roots since ancient Egyptian times and gradually  evolved into what we now know as marshmallows, however,  the marshmallows you can buy in the shops today owe very little to the original recipe.

We have provided some recipes below that show how the real marshmallows are made.  The current cornflour, gelatine, artificial flavouring and refined sugar marshmallows sold by candy manufacturers are not 'the real McCoy' at all and have no medicinal properties.

Harold McGee - On Food and Cooking: The Science and Lore of the Kitchen
the first marshmallow-like confection, called pâte de Guimauve, was made in France from the juice of the marsh mallow. Owners of small candy stores put the whipped sap from the mallow root into a candy mold. This time-consuming process was typically done by hand. Indeed, candy stores had a very hard time keeping up with the demand. Now, marshmallows are made by piping the fluffy mixture through long tubes and cutting its tubular shape into equal pieces.

In Belgium, they're still called Guimauves, and in some places they make them the traditional way with marsh mallow plant.  Very often the chocolate makers - who specialise in Belgium's justly famous hand made chocolates - also use hand made marsh mallows and cover them with dark chocolate. 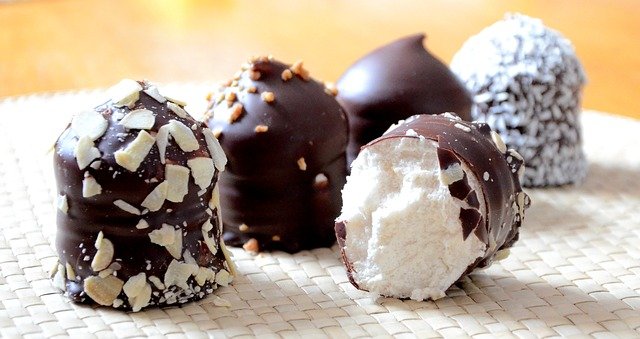 In the Lebanin and Syria, a herbal tea called the  "Zhourat" has Marsh Mallow as one of its principle ingredients.  This herbal tea consists of a blend of wild flowers, herbs, leaves and fruits and is a typical beverage of Lebanon and Syria. Although the ingredients in Zhourat do vary significantly as there is no standard recipe, one study found that in spite of the "Zhourat's" highly variable content, there were a determined set of key botanical components including Rosa x damascena Herrm.[Damask rose], Althaea damascena and officinalis Mouterde [Marsh mallow], Matricaria chamomilla L. [Chamomile], Aloysia citrodora Palau [Lemon verbena], and Elaeagnus angustifolia L.[Wild olive]. 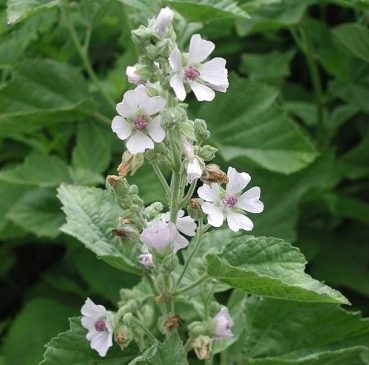 As the study said "The major health claims for 'Zhourat' as digestive, sedative and for respiratory problems are culturally coherent with the analysis of the traditional medicinal properties uses of its ingredients".

Most of the mallows have been used as food, and are mentioned by early classic writers with this connection. 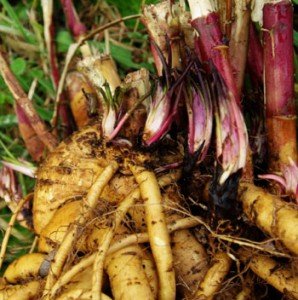 Family:  Mallow (Malvaceae) Hardiness:  All temperate zones. Herbaceous perennial native to Europe.  A premier healing agent, marshmallow root is nutritious, soothing to the digestion, stimulating to the immune system and helps prevent and repair ulcerations of the gastric mucosa and duodenum. Sow the seed in the spring. It is easy to grow in regular garden soil in the full sun or part shade. The plant prefers regular watering and makes a lot of biomass, both above the ground and below. Every part of the plant, including leaf, flower (and less useful, the stem) and especially the fresh or dried root, is useful in herbal medicine and is truly indespensable.

Marsh mallow, like many plants can chelate soil contaminated with heavy metals.  We can look at this in two ways.  If we look at it negatively, it means that a plant we think of as a healing plant could actually do us harm if grown in polluted soil.  On the positive side, it might mean that the same plant - if grown under safe conditions may be able to chelate us.
Furthermore, as a means of cleansing soil before healing plants are grown, Marsh mallow appears to be very effective being able to deal with a host of heavy metals. [see observation below].

The following extract from Dr. Duke's Phytochemical and Ethnobotanical Databases, lists the Chemicals and their Biological Activities in: 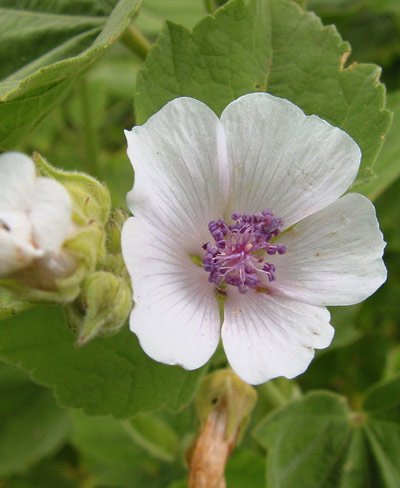 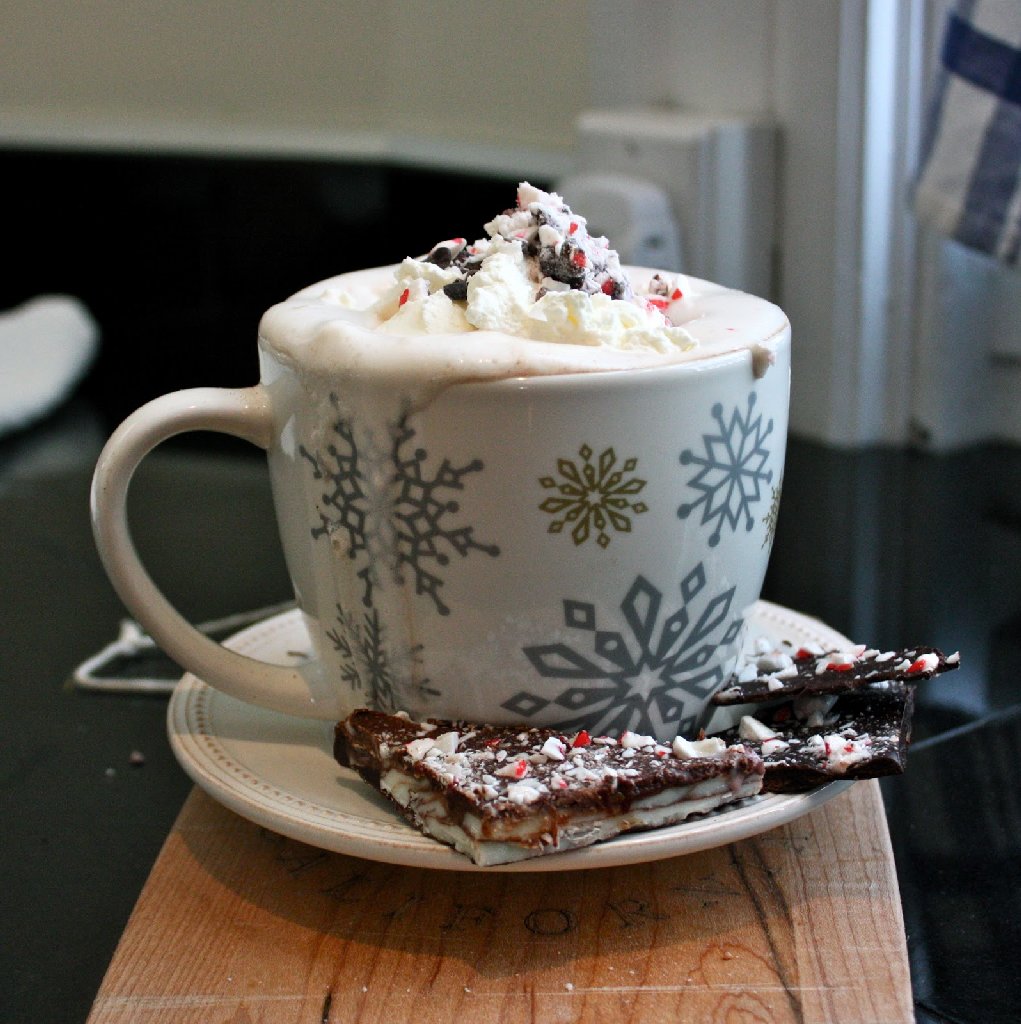 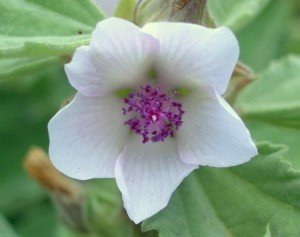 TANNIN Root 20,000 ppm;  Anthelmintic [An agent that destroys or causes the expulsion of parasitic intestinal worms]; Antibacterial; Antidysenteric; Antihepatotoxic; AntiHIV; Antiophidic [A substance able to counteract the toxin from the bite of a venomous snake]; Antiviral; Chelator; Pesticide;

The best way to take the medicine is via something that is delicious and there is nothing more delicious than a home made marsh mallow. 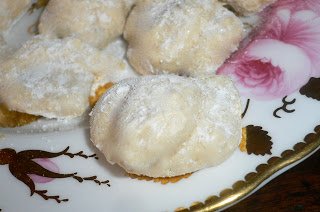 Make sure the mallow roots aren’t mouldy or too woody. Marshmallow gives off almost twice its own weight of mucilaginous gel when placed in water.
Make a tea of marshmallow roots by simmering in a pint of water for twenty to thirty minutes [or more]. Add additional water if it simmers down.
Soak the gum in ½ cup water. Stir the gum vigorously and plop it into a blender. Strain out the root liquid into the blender and blend the root liquid and the gum paste very thoroughly.
Heat the gum and marshmallow decoction (water) in a double boiler until they are dissolved together. 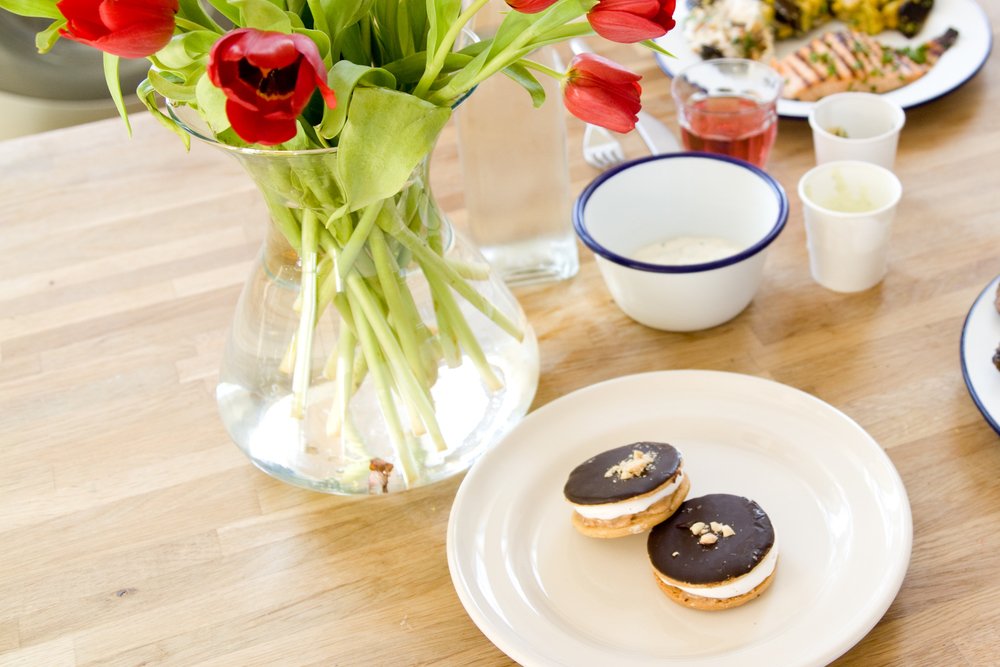 Stir in the sugar or honey as quickly as possible. The honey makes a sloppier marsh mallow but tastes delicious and is medicinally better being anti-bacterial.  When dissolved, add the well beaten egg whites, stirring constantly, but take off the fire and continue to stir.
Divide into batches and to each batch add flavouring of choice eg lemon rind to one, chocolate to another, mint leaves to another, vanilla to another, orange or rose flower water to another etc
Lay out on a flat surface. Let cool, and cut into smaller pieces.
For serving mix up the pieces as this adds an element of surprise when you eat them.  They go well with black coffee, hot chocalte and green tea. 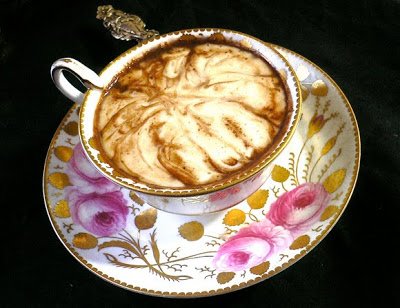 Home made marshmallows and hot chocolate with optional cognac

Gum Arabic three pounds, roots of fresh marsh-mallows eight ounces, one dozen of rennet apples, loaf sugar three pounds. Peel, core, and cut the apples in pieces. Cleanse the roots, and slice them lengthways in an oblique direction; add this to seven pints of water; soft or river water is the best when filtered; put it on the fire and boil for a quarter of an hour, or until reduced to six pints; pound and sift the gum through a hair sieve; strain the decoction into a pan with the gum; put it on a moderate fire, or into a bain-marie, stirring it until the gum is perfectly dissolved; then strain it through a coarse towel or tamis cloth, the ends being twisted by two persons; add it to the sugar, which has been previously clarified and boiled to the feather; dry it well over the fire, keeping it constantly stirred from the bottom. When it has acquired a thick consistence, take the whites of eighteen eggs, and whip them to a strong froth; add them to the paste, and dry until it does not stick to the hand when it is applied to it; add a little essence of neroli, or a large glassful of double orange-flower water, and evaporate again to the same consistence. Pour it on a marble slab well dusted with starch-powder, flatten it with the hand; the next day cut it into strips, powder each strip, and put them in boxes. Powder the bottom that they may not stick.

Although starch powder works, these are more tasty dusted with icing sugar. 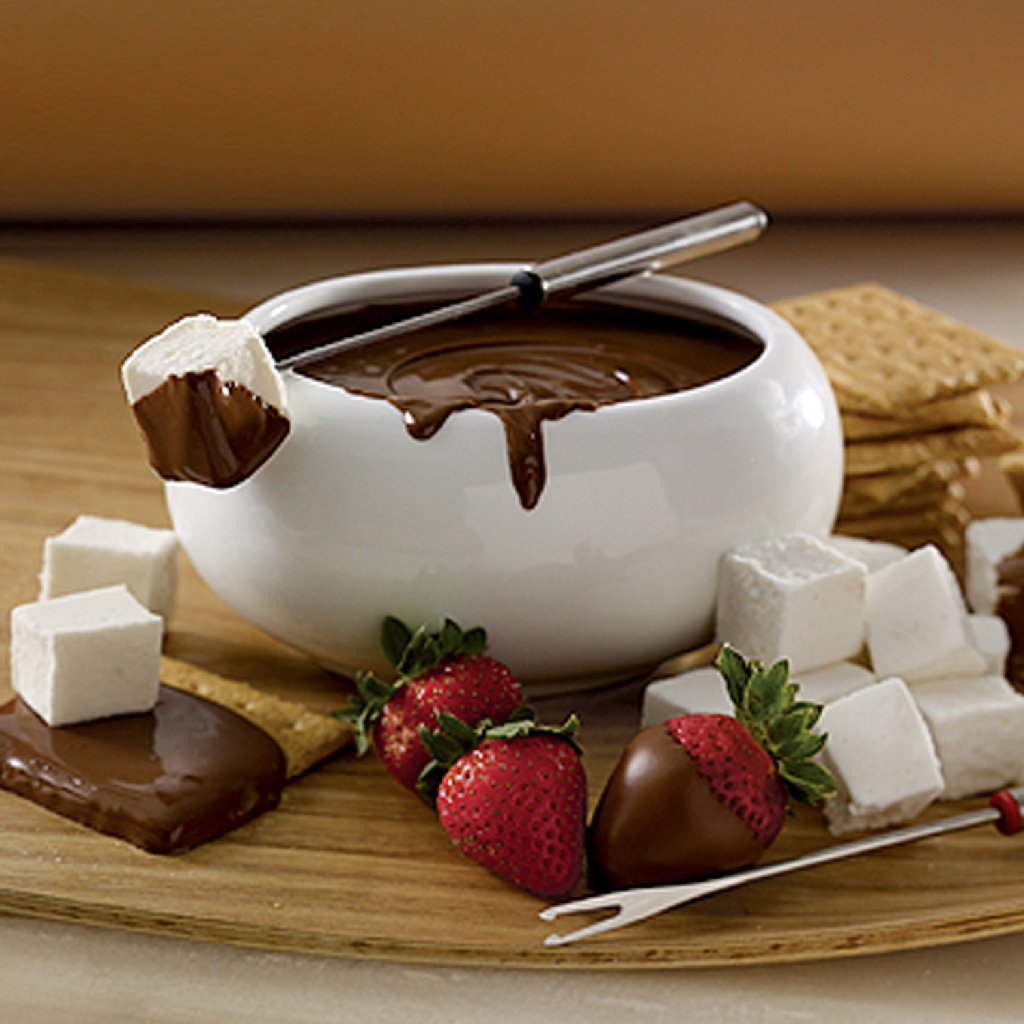 Mallow was an edible vegetable among the Romans; a dish of marsh mallow was one of their delicacies.

Prosper Alpinus stated in 1592 that a plant of the mallow kind was eaten by the Egyptians. Many of the poorer inhabitants of Syria once subsisted for weeks on herbs, of which marsh mallow is one of the most common. When boiled first and fried with onions and butter, the roots are said to form ‘a palatable dish’. 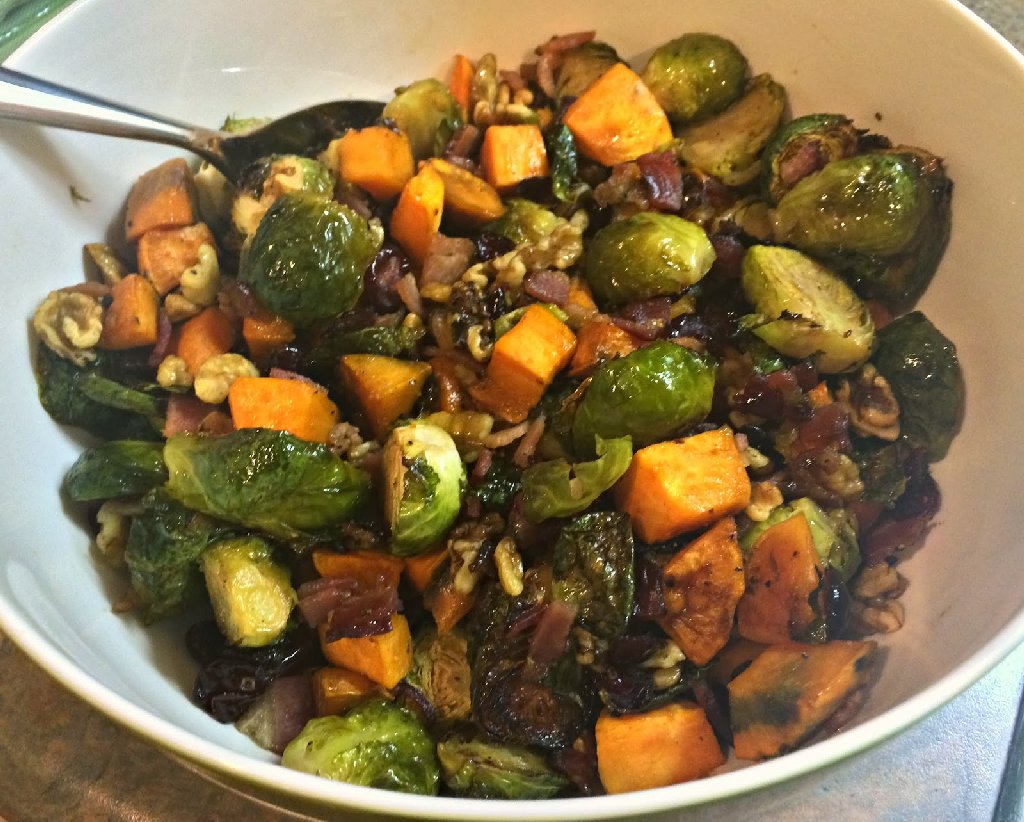 But there appear to be other ideas on the Internet that have more imaginative uses for marshmallow root.

One is to boil and mash the root and combine it with mashed parsnip, which has a similar texture.

This can then be eaten with butter as a simple savoury vegetable.  Add cheese to it and bake it in the oven [perhaps with crispy bacon added and fried onion] and you have an interesting 'roast' to serve with a salad.

We have also seen recipes that use it as a replacement for sweet potato in salads like the one shown - a warm salad combining nuts, roasted root and brussel sprouts, with a dressing of cider vinegar, honey and nut oil [eg hazelnut] depending on the nuts used.  Roasted hazelnuts and roasted sunflower seeds go well in this recipe, as do pistachios.

The root extract (halawa extract) is sometimes used as flavouring in the making of the Middle Eastern snack called halva.

The flowers and young leaves can also be eaten, and "are often added to salads or are boiled and fried".