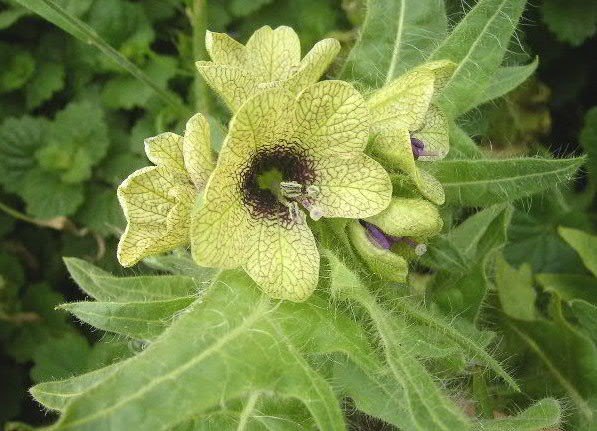 Henbane, or stinking nightshade - particularly niger but also other spp. Hyoscyamus is a small genus of flowering plants in the nightshade family, Solanaceae.

The larvae of some Lepidoptera species including Cabbage Moth eat henbane.

The eleven species it contains are known generally as the henbanes.  Only Hyoscyamus Niger is known to contain tropane alkaloids.  Examples include:

Henbane originated in Eurasia though it is now globally distributed.

Henbane was historically used in combination with other plants, such as mandrake, deadly nightshade, and datura as an 'anaesthetic potion', as well as for its psychoactive properties in "magic brews.”

These psychoactive properties include visual hallucinations and 'a sensation of flight' [out of body experiences]. Its usage was originally in continental Europe and Asia, though it did spread to England sometime during the Middle Ages. The use of Henbane by the ancient Greeks was documented by Pliny. The plant, recorded as Herba Apollinaris, was used to yield oracles by the priestesses of Apollo. 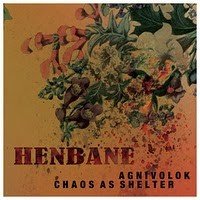 Henbane can thus be toxic. Its name came from Anglo-Saxon hennbana = "killer of hens". Hyoscyamine, scopolamine, and other tropane alkaloids have been found in the foliage and seeds of the plant. Common effects of henbane use in humans apart from the out of body experiences include, dilated pupils, restlessness, and flushed skin.

It was traditionally used in German beers as a flavouring, until the Bavarian Purity Law was passed in 1516 and outlawed the use of Henbane and allowed only the use of hops.  The presence of henbane  could account for quite a number of Medieval ‘visions’ and experiences in Germany including those amongst the priests and monks, as beer was drunk by the clergy.

Apart from the obviously stress relieving ability of being able to fly without having to use an airplane and airports [I jest], henbane has some rather specific uses.