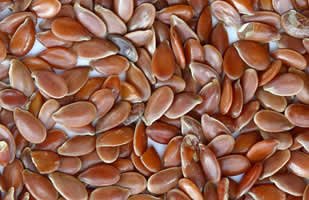 Flaxseed is the seed of the flax plant, which is believed to have originated in Egypt. Flax seeds come in two basic varieties brown and yellow or golden (also known as golden linseeds). Most types have similar nutritional characteristics and equal numbers of short-chain omega-3 fatty acids. The exception is a type of yellow flax called solin (trade name Linola), which has a completely different oil profile and is very low in omega-3 Fats.

And flax seeds have healing properties.

Flaxseed contains lignans (phytoestrogens, or plant estrogens), while flaxseed oil preparations lack lignans, so it is better to stick to the seeds.

Again, according to NCCAM

Scientists have also found that flax seeds contain Ferulic acid and may help those with Dementia and Alzheimers.  One of the reasons it can do this is because Ferulic acid is an anti-oxidant, but it also appears to be a chelation agent which means it may be able to get rid of various toxins in our bodies.  More details of the science behind this is provided in the observation on Angelica and dementia - angelica also contains ferulic acid.

Ferulic acid is a type of organic compound. Its name comes from the word Ferula, referring to the giant fennel.

DO NOT TAKE SUPPLEMENTS This is a waste of time, enjoy the seeds as seeds. Also do not prepare the seeds, for example grinding them or roasting them until you intend to use them. Whole flax seeds are chemically stable, but ground flaxseed can go rancid at room temperature in as little as one week.

You can toast them lightly and sprinkle them in salads, combine them with other ingredients in breakfast dishes and use them as a whole seed in bread mixes if you make your own bread. They are also nice in cakes.

Flaxseed, called ('Tisi' or 'Alsi') in northern India, has been roasted, powdered and eaten with boiled rice, a little water, and a little salt since ancient times in the villages, it makes a very tasty accompaniment to most dishes – vegetarian or meat.

Make sure you have plenty of water to drink if you eat flax seeds as they absorb water and you can get dehydration or worse a bowel obstruction, if you don't drink enough. The same principles you might use for bran should be followed.

Don't overdose on them, just enjoy them as part of your normal diet.

see the observations for the explanations

They do need to be mixed with other foods, they are not so tasty on their own.