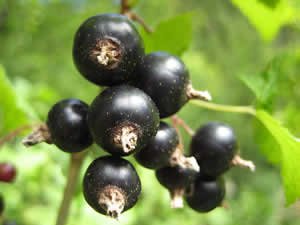 The blackcurrant (Ribes nigrum) is a woody shrub in the family Grossulariaceae grown for its 'piquant berries'. It is native to temperate parts of central and northern Europe and northern Asia where it prefers damp fertile soils and is widely cultivated both commercially and domestically. It is winter hardy but cold weather at flowering time during the spring reduces the size of the crop. Bunches of small, glossy black fruit develop along the stems in the summer and can be harvested by hand or by machine. The fruit is rich in vitamin C, various other nutrients, phytochemicals and antioxidants. Blackcurrants can be eaten raw but are usually cooked in a variety of sweet or savoury dishes. They are used to make jams, jellies and syrups and are grown commercially for the juice market. The fruit is also used in the preparation of alcoholic beverages and both fruit and foliage have uses in the preparation of dyes.

But from the point of view of this site they have been scientifically proven to have considerable healing power, somewhat confirming their use in folk and herbal medicine.

As a crop, the blackcurrant suffers from several pests and diseases. The most serious disease is reversion, caused by a virus transmitted by the blackcurrant gall mite. Another is white pine blister rust which requires two alternating hosts, the blackcurrant and certain coniferous trees. This fungus caused damage to forests when the fruit was first introduced into North America. As a result, the blackcurrant has been subject to restrictions in the United States as a disease vector for most of the 20th century. Breeding is being undertaken in Europe and New Zealand to produce fruit with better eating qualities and bushes with greater hardiness and disease resistance.

Lightly cooked with sugar and then sieved they make a delicious sauce for ice cream, a base for blackcurrant fool [with cream or egg based custard],  and the juice can be added to squeezed orange juice and is truly delicious and refreshing as a drink

In savoury dishes I have combined the puree with balsamic vinegar and used it with smoked duck and smoked venison and as a sauce on venison burgers.  It can be added at the very end of cooking rich game dishes and gives a delicious sweet sharp flavour to the sauce/gravy.

See the observations, scientists are working on it

The vitamin C content of black currants is well known, but it clearly has a lot more potential in health terms than we currently [sorry for the pun] know

Can't think of anything