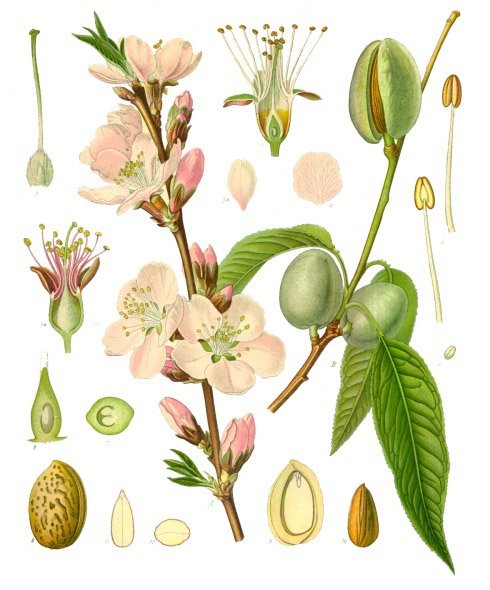 The almond  (Prunus dulcis, syn. Prunus amygdalus, Amygdalus communis, Amygdalus dulcis) (or badam in Indian English, from Persian: بادام‎‎) is a species of tree native to the Middle East and South Asia.

"Almond" is also the name of the edible and widely cultivated seed of this tree. Within the genus Prunus, it is classified with the peach in the subgenus Amygdalus, distinguished from the other subgenera by the corrugated shell (endocarp) surrounding the seed.

The word "almond" comes from Old French almande or alemande, derived through a form amygdala from the Greek ἀμυγδαλή (amygdalē) (cf. amygdala), an almond.  The adjective "amygdaloid" (literally "like an almond") is used to describe objects which are roughly almond-shaped, for example, the brain structure amygdala. 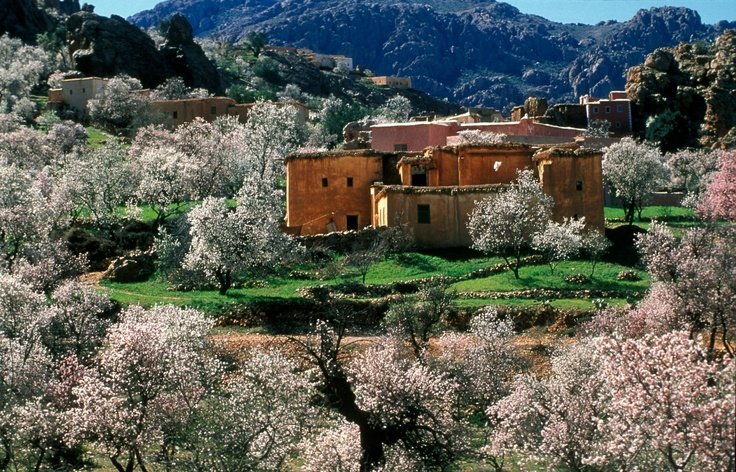 The Almond tree is a native of the Mediterranean climate region of the Middle East, eastward as far as the Indus River in Pakistan, but it has been extensively distributed over the warm temperate region of the Old World, and is cultivated in all the countries bordering on the Mediterranean. It was very early introduced into England, probably by the Romans, but chiefly for its blossom.  In Iran, India, Afghanistan and Pakistan, it is known as bādām.

Turkey, Italy, the Middle Eastern countries, Spain and Greece all produce almonds, but there are far more varieties grown here than in the USA or Australia.  Greece, for example produces 'Ferragnes' which has a sweet taste and is premium quality. Because of its quality, it is used as a luxury nut. In contrast, California's almonds are grown on an industrial monoculture scale.  Close to one million hives of honey bees (nearly half of all beehives in the USA) are trucked in February to the almond groves for pollination. This has been heavily affected by ‘colony collapse disorder’ – sick bees. 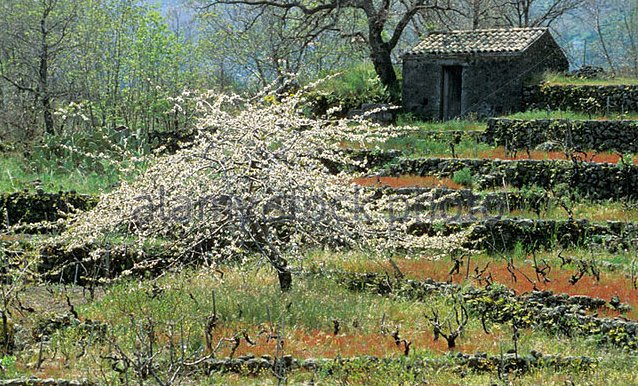 The almond is a deciduous tree, growing 4–10 m (13–33 ft) in height, with a trunk of up to 30 cm (12 in) in diameter. The young twigs are green at first, becoming purplish where exposed to sunlight, then grey in their second year. 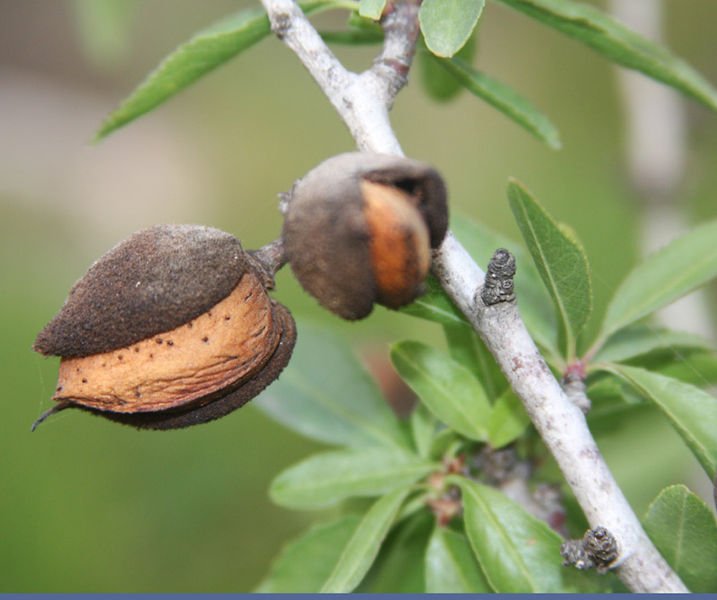 The flowers are white to pale pink, 3–5 cm (1–2 in) diameter with five petals, produced singly or in pairs and appearing before the leaves in early spring.

The almond fruit measures 3.5–6 cm (1–2 in) long. In botanical terms, it is not a nut, but a drupe. The outer covering or exocarp, fleshy in other members of Prunus such as the plum and cherry, is instead a thick, leathery, grey-green coat (with a downy exterior), called the hull. Inside the hull is a reticulated, hard, woody shell (like the outside of a peach pit) called the endocarp. Inside the shell is the edible seed, commonly called a nut. Generally, one seed is present, but occasionally two occur. 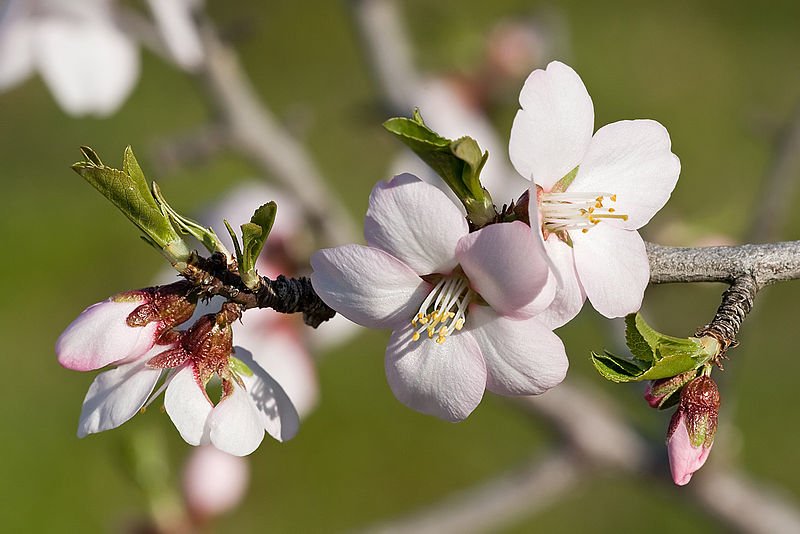 Almond grows best in Mediterranean climates with warm, dry summers and mild, wet winters. The optimal temperature for their growth is between 15 and 30 °C (59 and 86 °F) and the tree buds have a chilling requirement of 300 to 600 hours below 7.2 °C (45.0 °F) to break dormancy.

Almonds begin bearing an economic crop in the third year after planting. Trees reach full bearing five to six years after planting. The fruit matures in the autumn, 7–8 months after flowering.

There are two principal forms of the Almond – the Sweet and the Bitter almond. 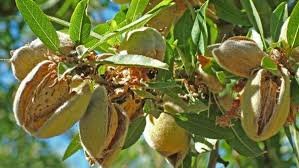 The wild form of domesticated almond grows in parts of the Levant; almonds must first have been taken into cultivation in this region. The fruit of the wild forms contains the glycoside amygdalin, "which becomes transformed into deadly prussic acid (hydrogen cyanide) after crushing, chewing, or any other injury to the seed."  Eating even a few dozen in one sitting can be fatal.

Selection of the sweet type, from the many bitter types in the wild, marked the beginning of almond domestication. It is thought that a genetic mutation caused an absence of amygdalin, and this mutant was selected and possibly grown from seed.  We will never know how it happened as despite speculation, all this happened before even the Early Bronze Age (3000–2000 BC), as the archaeological sites of Numeria (Jordan), contains an archaeological example of the sweet almond, as does Tutankhamun's tomb in Egypt (c. 1325 BC).

The observations below indicate that the almond is exceptionally nutritious and has many interesting medicinal properties.  If we first take a look at the amino-acids and fatty acids, we see the following : 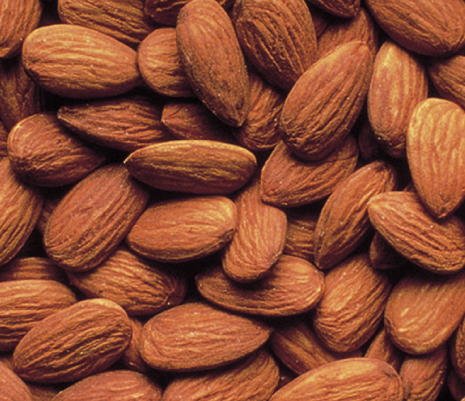 Now the vitamins.  Although almonds have no Vitamin C or D and only a trace of Vitamin A, they are very high in vitamins such as Vitamin E and high in the B vitamins. 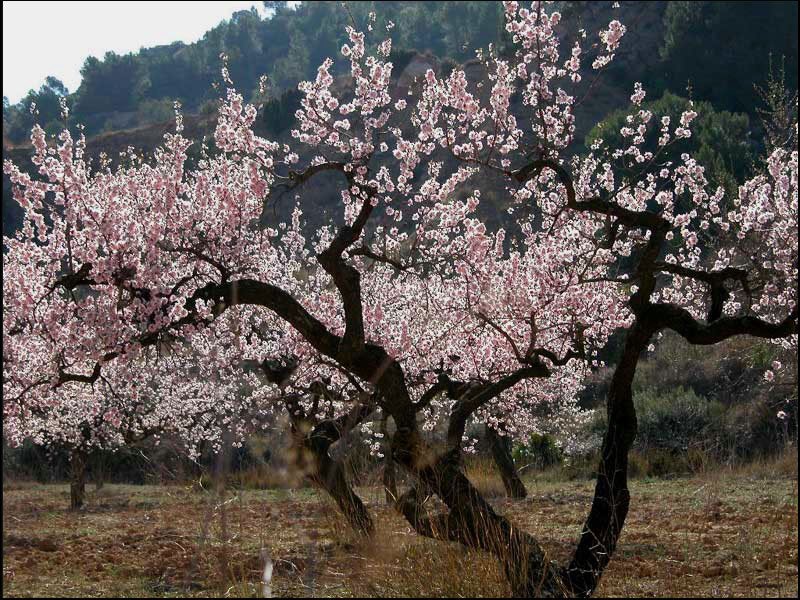 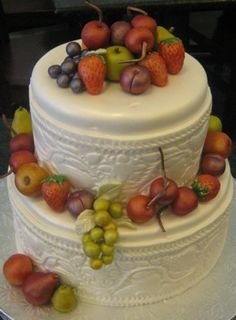 Whole almonds may be smoked, toasted, and salted.

Blanched almonds are shelled almonds that have been treated with hot water to soften the seedcoat, which is then removed to reveal the white embryo.

They may be sliced (flaked or slivered), and ground. If ground very finely they become a flour. One of the recent wonderful discoveries is that ground almonds or almond flour – being gluten free -  can be used instead of wheat flour.  Both are actually tastier than flour and add a great deal of richness to cakes as well as savoury dishes.  If added to soups they thicken and add texture.

Almonds are used in nougat [chopped], French macarons/macaroons, noghl, and other sweets and desserts. They are also used to make almond butter, a spread similar to peanut butter, popular with peanut allergy sufferers and for its naturally sweeter taste.

Marzipan or almond paste is made from ground almonds and in the UK is used to decorate Christmas cakes and wedding cakes, royal icing is placed over the marzipan.  In mainland Europe, marzipan is used to make marzipan ‘fruits’ at Christmas. 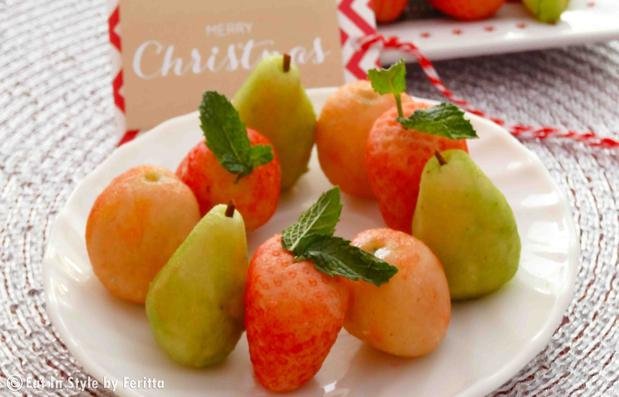 In Apulia and Sicily, pasta di mandorle (almond paste) is used to make small soft cakes, often decorated with pistachios, or chocolate. Southwestern Berber regions of Essaouira and Souss are also known for amlou, a spread made of almond paste, argan oil, and honey. Almond paste is also mixed with honey, olive oil or butter, anise, fennel, sesame seeds, and cinnamon to make sellou (also called zamita in Meknes or slilou in Marrakech), a sweet snack known for its long shelf life and high nutritive value.

The young, developing fruit of the almond tree can be eaten whole ("green almonds") when they are still green and fleshy on the outside and the inner shell has not yet hardened. The fruit is somewhat sour, but is a popular snack in parts of the Middle East, eaten dipped in salt to balance the sour taste. Also in the Middle East they are often eaten with dates. They are available only from mid-April to mid-June in the Northern Hemisphere; pickling or brining extends the fruit's shelf life. 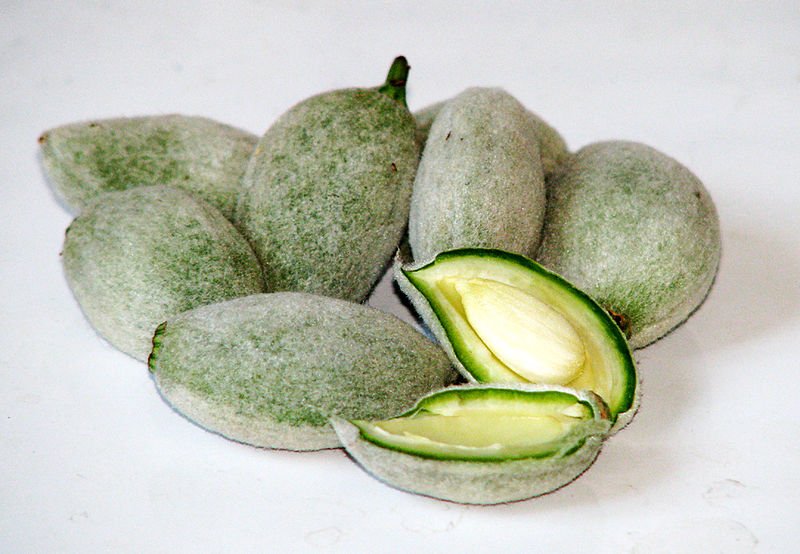 “Chocolate & Almond Cake is a community recipe submitted by SophieSophieSophie and has not been tested by Nigella.com”.  This is an Austrian recipe.  The sugar can be replaced by honey. 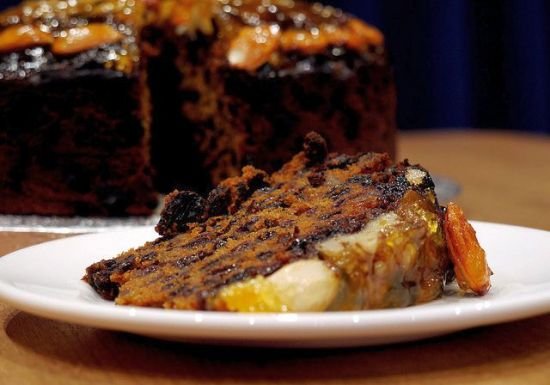 This can be covered with glace fruits as a decoration or with marzipan and marzipan fruits.  It can also be used to make a Simnel cake, which has a marzipan topping and filling, along with apricot or peach jam in both the filling and topping.  The jam is used to fix the marzipan to the top of the cake. 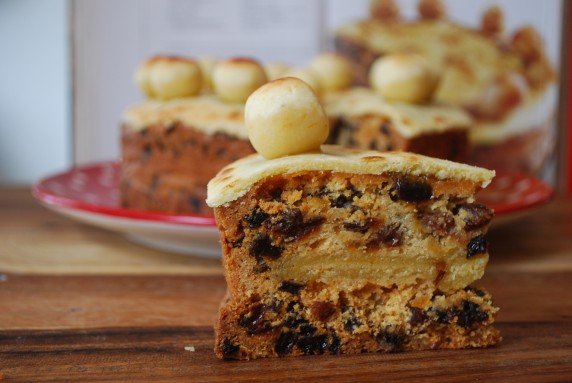 Korma recipes use ground almonds and there are all sorts of variations on this basic theme.  Chicken, mushroom and spinach korma, for example, using ground cardamom seeds, cinnamon and ground instead of fresh ginger. All use yoghurt, the creamier the better.  The following is a simple recipe.  Even with this you can ring the changes using mango instead of banana.  Serve with basmati rice and crispy grilled poppadoms or naan bread. 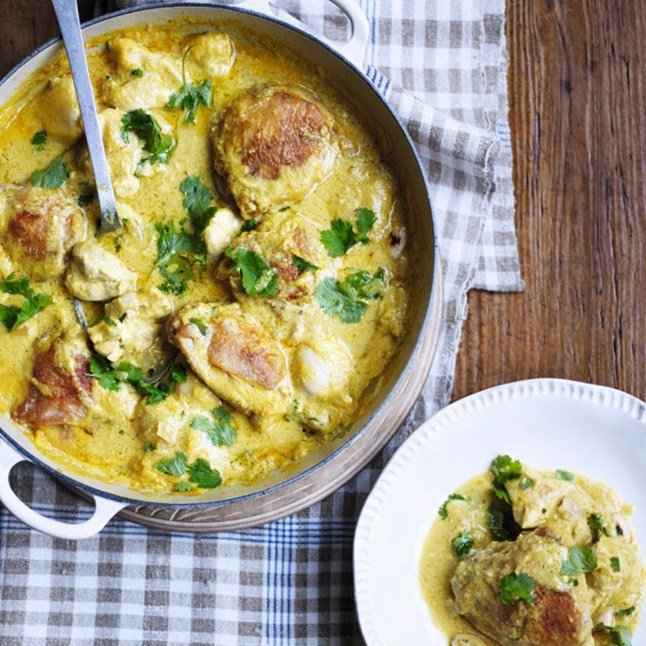 Madhur Jaffrey also has a wonderful recipe along similar lines for a whole leg of leg deeply scored with a sharp knife which is then marinaded in the paste overnight covered in clingfilm.

The clingfilm is removed and the lamb is then slow roasted in the oven until just pink. 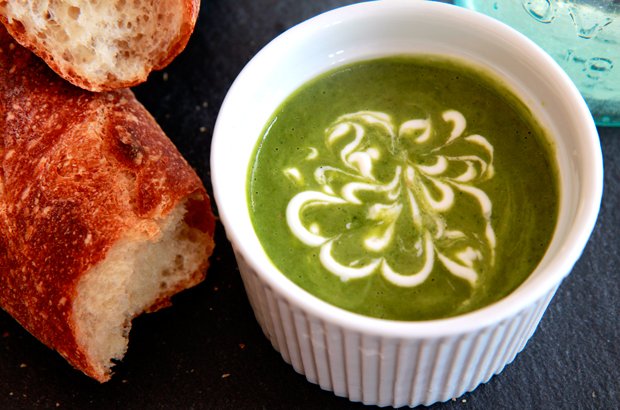 This can be served with little pieces of stilton cheese sprinkled over the top, which makes it tangy and a bit creamier. Or grated cheese can be whisked in with the almonds.  The stock needs to be well flavoured.

This soup is good sprinkled with chopped crispy bacon or pancetta. 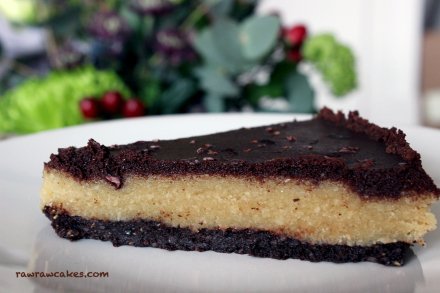 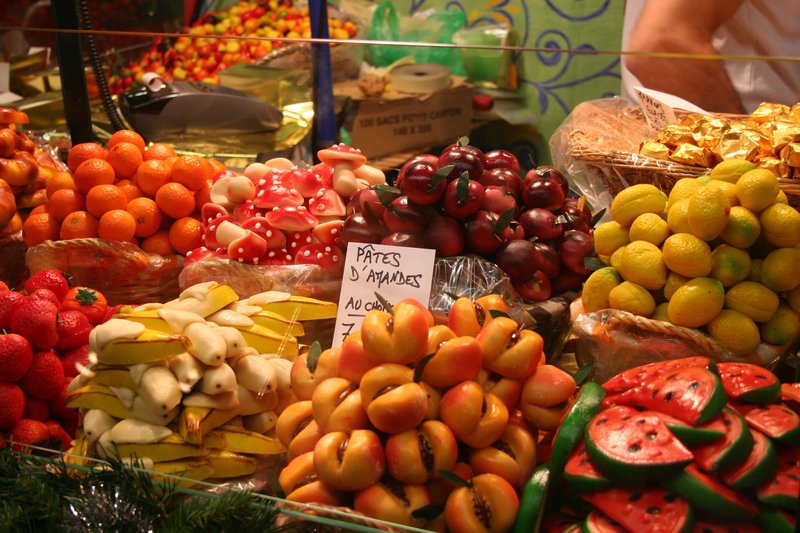 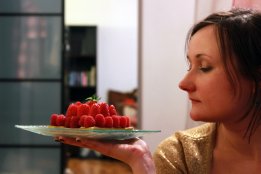 There are some absolutely stunning recipes that use ground almonds and which are some of the yummiest desserts and sweets we have seen for a long time, on a site called Raw Raw cakes.  Follow the link.

The site was created by a lass called Valda, who was born and raised in Latvia, and who currently lives in Dublin, Ireland. Valda says that "if you want me to make that delicious healthy cake for your special occasion, I’d be happy to discuss that. I’m also open to invitations to workshops and seminars. And definitely contact me if you are interested in sponsoring my ‘uncook’ recipe book". 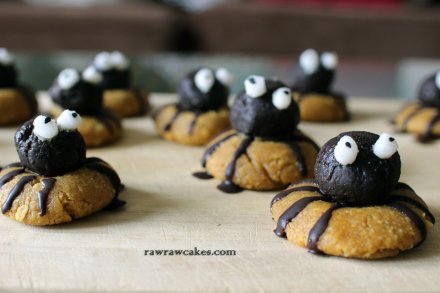