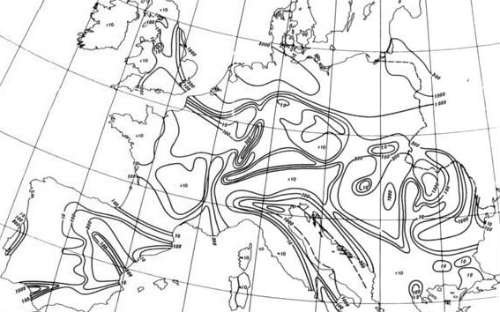 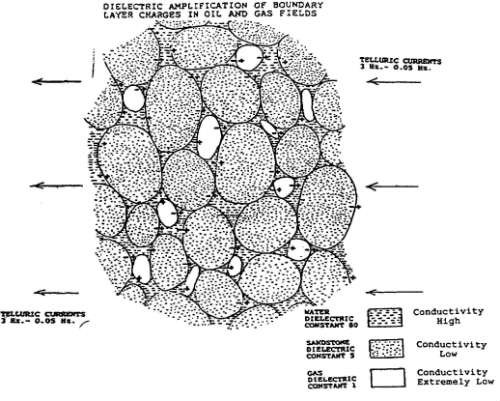 Any conductive material - see Electrical conductivity of various materials - subject to these fluctuations in the Earth’s magnetic field may thus induce an electric current.  Since the fluctuations are so low in frequency, the current so produced is also very low frequency.

As metal deposits, fault lines and other features that are conductive to electric current tend to join up, these currents can ‘flow’ and the overall currents so generated are called ‘Telluric currents.’

A telluric current (from Latin tellūs, "earth") is an oscillatory electric current which moves underground or through the sea. Telluric currents result from principally natural causes, but because man has now added numerous man made conductive structures to the earth’s surface, from the Eiffel tower to the Alaskan pipe lines, these can have an overall effect, spreading the inter-connectivity.

The currents are extremely low frequency and travel over large areas at or near the surface of Earth.

The electric potential on the Earth's surface can be measured at different points, enabling us to calculate the magnitudes and directions of the telluric currents and this has been done. These currents are known to have diurnal characteristics for the very obvious reason that any induced by solar activity will be inactive at night, however, it has been shown that they tend to move in the direction of the equator during the day and towards the pole at night. Telluric currents can even be harnessed by means of ‘earth batteries’. 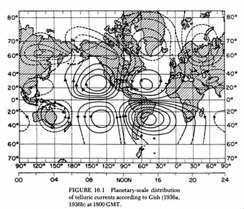 Planetary-scale distribution of telluric currents
according to Gish(1936a, 1936b) at 1800 GMT.

One rather interesting oddity about the currents, if you compare the map above with the one below, is that their epicentres seem to coincide with some well known areas of ‘mystery’ – areas which have long been marked out as peculiar in that they have produced a number of inexplicable events.

One epicentre appears to be located over the so called ‘Bermuda Triangle’, another over Easter Island, there is a small one near Japan in the so called ‘Dragon’s triangle’.  Another area just off Uruguay has also been called the ‘South Atlantic triangle’ and so on.

When Ivan Sanderson mapped them out he gave them the somewhat colourful name of ‘vile vortices’ but there does seem to be a rather interesting correlation with real and measured centres of energy formed by the telluric currents and the so called vortices he identified simply by mapping observations of missing ships, planes and people, as well as other odd events. 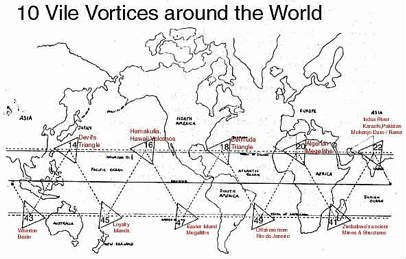 Having said this, these vortices are not stable for reasons which should be clear from the explanation. They depend on the geomagnetic storms, the fault lines, the movements of the earth, the man made structures, mining activities depleting ores and redistributing minerals, and also the existence of non conducting barriers.

There are a number of materials – man made and natural that are very low conductive materials – pure water being one of them and they act like barriers and conduits for the electrical energy so produced. So for example two areas of chalk [which does not conduct electricity] surrounding an ore seam, will serve to direct the current along the seam. If we dig a canal and direct water through an area of high iron deposits we thereby create a discontinuity in the flow of any electric current in the iron deposits.

Air is also a very good insulator – it does not conduct electricity at all well, so if we dig a big trench or a ditch or similar in front of a seam which generates the current, we serve to concentrate the current in that area, it cannot ‘escape’.

This appears to have been known in ancient times [although perhaps not in the terms I have described it] At Stonehenge, for example and a number of other ancient sites of this type in the UK, large trenches often over 3 feet deep have been cut into the ground which seem to redirect any telluric current generated at the site to very specific focal points of energy.

Stand at these points and you are likely to get a little burst of low frequency electric current.

It is also at these points that you get BOLS – balls of light caused by charge build up at discontinuities and caused by discharge of electric current.

The experiences occurred within an area in which irregular amplitude modulations between 1 microT and 5 microT (50 mG) from 60-Hz sources, with durations of a few seconds to several tens of seconds, were measured.

This case suggests that transient, complex temporal patterns of power-frequency magnetic fields generated by less than optimal grounding in dwellings and telluric currents may be sufficient to evoke experiences in the brains of sensitive individuals. Cultural labels, applied by the experients, then affect the explanations and expectancies for these experiences.