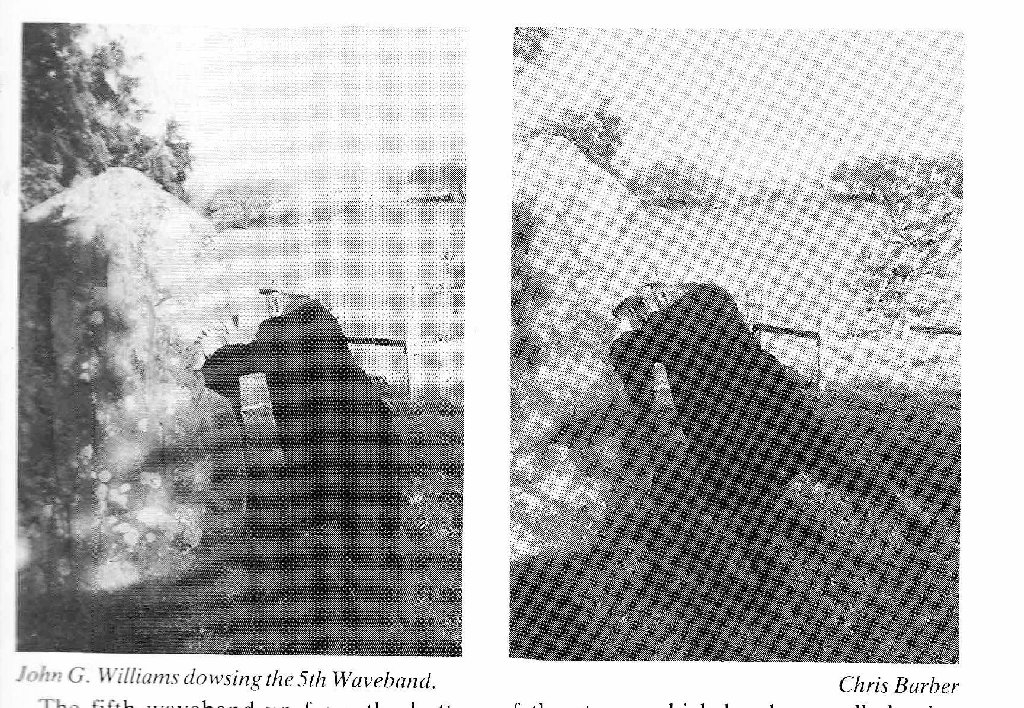 Sensitive persons like dowsers sometimes detect different kinds of vibrations or powers at these sites if they are in their original positions. These are difficult to define but it is thought that there are seven different kinds of power bands of which three operate below ground level and the other four can be ascertained by some people on the sides of these stones above the ground. It seems that the first five -power or wavebands can he experienced on all prehistoric standing stones but the top two bands, numbers six and seven can only be felt on the taller standing stones, which are over 5 feet high. This is a new field of study which has shown some interesting and promising results.

The fifth waveband up from the bottom of the stone, which has been called spiral power, is the easiest one for an open-minded person to experience. Unfortunately many people through modern scientific teaching believe that these things are not possible and then make up their minds not to experience any reaction when it is explained to them how it is possible to contact this curious natural power. This is done by placing the palms of both hands on the face of the prehistoric standing stone at about 5 feet above ground level on the north or east sides of the stone during the hours of daylight.

If the hands are placed firmly against the stone, after a short while a responsive person will experience a peculiar sensation of being pushed away from one side of the stone. But if either palm is taken away from the face of the stone, then this sensation ceases immediately.

This strange spiral power pushes a person away from the standing stone either to the right or the left. If it pushes him away to the right and he then crosses over his hands and puts his palms flat on the face of the stone so that his hands swop positions, then the spiral will act in a reverse direction and push him away to the left. This is something like reversing an electrical circuit and indicates that the movement of the person away from the face of the upright stone is caused by some kind of power and is not the result of the person's imagination.

It has been found that this spiral power waxes and wanes in a twenty-eight day cycle so there are times when the spiral power is less effective than at others. At the end of the cycle the power is reversed so that it moves a person to the right on one day then 28 days later it will move the same person to the left. Some people who experience this spiral power feel afraid of the unknown and just want to forget about it. Others, because of the variable factors mentioned above, think that they have been misled in some way because they may not be able to repeat the experience when the power potential has become low when approaching a change-over time.

A few dowsers can detect seven different power bands at these prehistoric standing stones but it seems that the top two power bands, numbered for convenience six and seven, are only found on the taller stones that are over 5 feet high. The seventh waveband seems to have some connection with ultra-violet light and can be contacted by some people when they touch the top of one of these taller stones with the finger tips of both hands. This may cause a violent muscular contraction and may therefore be dangerous to people who suffer from heart disease.

It is thought that these seven different waveband powers correspond to the lowest divisions of what has been named The Sacred and Secret Pi design. This was known to the 17th century Welsh mystical poet Henry Vaughan and in Silex Scintillions, which was published in 1650, there is a poem called "The Stone", in which he has written the following strange lines:-

"But I (Alas)
Was shown one day in a strange glass
That busie commerce kept between
God and his Creatures, though unseen
They hear, see, speak
And into loud discoveries break
As loud as blood.