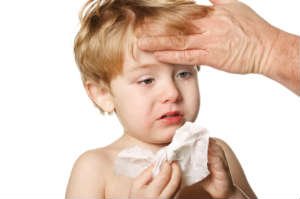 The common cold, head cold, or simply 'a cold', is a viral infectious disease of the upper respiratory tract. It is the most frequent infectious disease in humans with the average adult "getting two to three colds a year and the average child getting between six and twelve". These infections have been with humanity since antiquity.

Non-influenza respiratory viral infections are commonly detected among adults admitted to [our] hospital and can cause serious illness. Over the study period, 503 of 46,024 (1·1%) admitted patients had a positive result. Human rhinovirus was the most commonly detected virus followed by influenza A, human metapneumovirus, respiratory syncytial virus, and parainfluenza virus, adenovirus, and influenza B, respectively. Infection in immunocompromised patients was associated with a higher rate of progression to pneumonia and death. PMID: 24490751 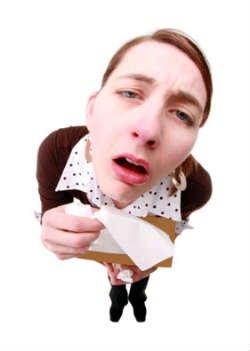 A cold usually begins with fatigue, a feeling of being chilled, sneezing and a headache, followed in a couple of days by the main symptoms. Symptoms may begin within 16 hours of exposure and typically peak two to four days after onset.

The typical symptoms of a cold include cough, runny nose, nasal congestion and a sore throat, sometimes accompanied by muscle ache, fatigue, headache, and loss of appetite.

A sore throat is present in about 40% of the cases and a cough in about 50%, while muscle ache occurs in about half.

In adults, a fever is generally not present but it is common in infants and young children, probably because their immune system is much better and is using heat to fight the virus.

“The color of the sputum or nasal secretion may vary from clear to yellow to green and does not indicate the class of agent causing the infection.”

Symptoms usually resolve in seven to ten days but some can last for up to three weeks. The average duration of cough is 18 days and in some cases people develop a post-viral cough which can linger after the infection is gone. In children, the cough lasts for more than ten days in 35–40% of the cases and continues for more than 25 days in 10%.

The common cold is a viral infection involving all of the different strains of the rhinovirus, a type of virus with over 99 known varieties. Well over 200 virus strains are implicated in the cause of the common cold; but the rhinoviruses are the most common. Others include: “human coronavirus adenoviruses, the syncytial virus, enteroviruses and metapneumovirus”. Frequently more than one virus is present.

There is no cure for the common cold, as such there are only two options open, to try to prevent getting it and to provide palliatory treatment if you do get it.

The common cold virus is typically transmitted via airborne droplets – so via a sneeze for example, - direct contact with infected nasal secretions, or contaminated objects. In essence, it is virtually impossible to avoid unless you never go out or see anyone. Touch a door handle, shake hands with someone and you could get it. The viruses can survive for prolonged periods in the environment (over 18 hours for rhinoviruses) and can be picked up by people's hands and subsequently carried to their eyes or nose where infection occurs.

“Transmission is common in daycare and at school due to the proximity of many children with little immunity ....These infections are then brought home to other members of the family.” 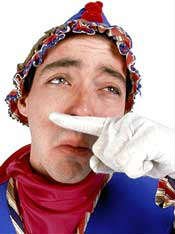 Sit next to someone on the tube or bus, work with someone go to a common toilet and you stand a chance of picking it up, principally because, although the person who has the virus may stay at home when it strikes with full force, they are still infectious when they are just feeling 'under the weather' at the beginning. “Rhinovirus-caused colds are most infectious during the first three days of symptoms; they are much less infectious afterwards.”

But there is one thing you can do to help yourself. Viruses do not like heat, which is why they tend to appear during the winter months and seem to favour those who get cold. A person who is cold has compromised their immune system, as in the first place cold narrows the blood vessels and the immune system's defences cannot get through, and in the second place, the body's energy has to be directed into maintaining the right temperature and the immune system has to take second place.

“The traditional folk theory is that a cold can be "caught" by prolonged exposure to cold weather such as rain or winter conditions, which is how the disease got its name”. And the folk theory is right, “the majority of the evidence suggests that body cooling may result in greater susceptibility to infection”.  Wrap up warm, wear a vest, wear woolly knickers, wear long johns, leg warmers, scarves, mittens even inside [sorry - a joke].  Wear a liberty bodice [those over 60 will remember these].

Stay as warm as you can, warmth can help a great deal in tackling the virus. Plenty of fluids to ensure the nasal secretions do not dry up. The mucus traps the viruses and provides the body with a way of expelling them before they get farther into the system. Use paper hankies and burn them. Wash your hands before shaking hands to help others not catch the cold. Stay away from school and work to limit the spread. Boost your immune system with foods containing zinc and with warm drinks. Freshly squeezed lemon juice and honey is soothing [note that honey however is antibacterial not antivirus].  My mum used to make us all 'Beef tea' which was basically meat and bones boiled to produce a lovely rich stock.  It was sensible stuff as meat contains lots of zinc and the stock was warming and easily digested. 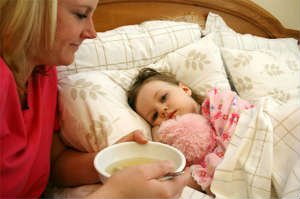 Sleep as much as possible. Rest, relax, listen to nice music.

Do not use antibiotics, a cold is a viral infection. Do not ask your doctor for antibiotics. Antibiotics can destroy the bacterial flora in your Intestines and lead to irritable bowel and a host of more serious infections and illnesses. 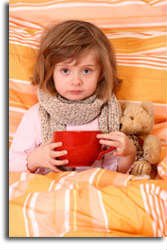 There are no drugs and no vaccines that can treat the common cold, use food as your friend,  - Eating for health - eat sparingly but well, fruit vegetables and vitamin containing foods. Foods containing plenty of vitamins and minerals help to keep your body in balance enabling it to devote more resources to the immune response. Do not resort to supplements.

Where complications arise there appears to be a point where the Fever is the main contributor to the experiences, producing in some cases a true delirium.

In hospitals and old people's homes you appear to run the risk of the full gamut of other experience provoking problems....