The chariot has always been the symbolic means of transport of those who are pursuing the spiritual path [or, for that matter the gods themselves].  A very junior and unpractised god – Phaeton – careered about the sky until he crashed in flames in the Greek myth by Ovid.  Krishna was Arjuna’s charioteer, Ezekiel flew in a chariot.  Plato described the symbolism.  But ultimately the full true symbolism is to be found best described in the Katha Upanishad:

The Higher Self (atman) is the owner of the chariot;

the body (sarira) is the chariot;

intuitive discernment and awareness (buddhi) is the charioteer;

the thinking function (manas) is the bridle;

the sense forces (indriya) are the horses;

and the objects or spheres of sense perception (visaya) are the ranging ground.

…………..For one who is devoid of real insight and has not properly and constantly yoked and tamed his mind – that is to say, for one who has not disciplined and controlled both his conscious mental faculty (manas) and the intuitive awareness (buddhi) which is a manifestation of the irrational unconscious – the sense forces become unmanageable, like the wicked horses of a charioteer.  But for him who is always full of intuitive awareness and who has tamed and yoked his mind, the senses are subdued like the good horses of a charioteer.

Wirth probably never read the Upanishads and his explanation is not a great deal of help.  Simply put the card represents the need for various forms of sensory deprivation

But the card is OK as a depiction and he has added some interesting additional symbolism relating to the chariot itself – the body………….. 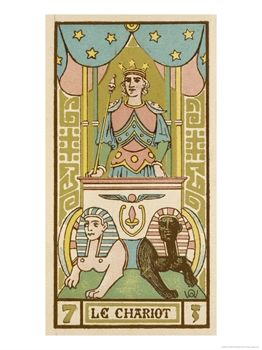 …………like, the sidereal or astral body of Paracelsus and the occultists, the Corps aromal of Fourier, the Linga Shanra, or, no doubt better, the 'Kama rupa' of esoteric Buddhism.  There is nothing less simple than this mysterious entity. First of all one can make out the imperceptible web on which every organism is constructed. It is the phantomlike frame into which matter fits, the scaffolding allowing the body to build itself, but which lives to assure the preservation of all that lives, for without it everything crumbles. The cubic form of the chariot corresponds to this invisible support of all that is visible. Its ethereal nature is confirmed thanks to the winged globe of the Egyptians which decorated the panel of the vehicle. …………..

The phantom-like body, the Eidolon of the Greeks, is not in direct contact with material substance, therefore the Chariot does not touch the ground except by the intermediary of its wheels. These have red spokes in token of the whirls of fire which in the vision of Ezekiel support the Chariot throne of the Divinity, the famous Merkabah constantly commented upon by the Kabbalists.