The symbolism of this Hindu concept is based on the Wheel but  more specifically the Wheel with six spokes or the clock. 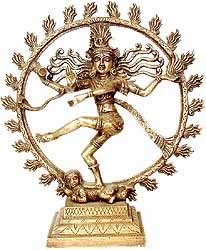 Nataraja is literally The Lord (or King) of the Dance.  The statue shows the Hindu god Shiva as the cosmic dancer who performs his divine dance to destroy the old faulty software and to then implement new software.

The sculpture is usually made in bronze, with Shiva dancing in an aureole of flames, which represent the cleansing and purification process as well as the destruction process.  The flames are in the form of a wheel because of the cyclical nature of the process of the spiritual path.

Lifting his left leg [see Big Foot and lameness] , he balances on a ‘demon’ or ‘dwarf’ who symbolises the faulty software.   The two most common forms of Shiva's dance are the Lasya associated with creation, and the Tandava  associated with destruction. In essence, the Lasya and the Tandava are just two aspects of Shiva's nature; for he destroys in order to create, tearing down to build again.

It is important to realise that like yoga, dance is used to induce trance, ecstasy and spiritual experience, thus the statue is showing both the conceptual ideas behind rebirth etc, but also one mechanism used in achieving it in Hinduism.