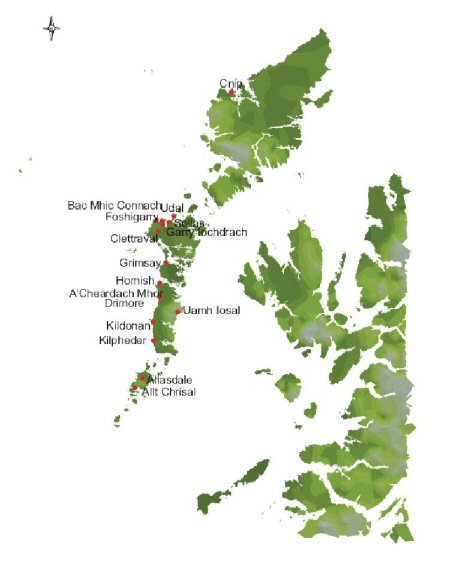 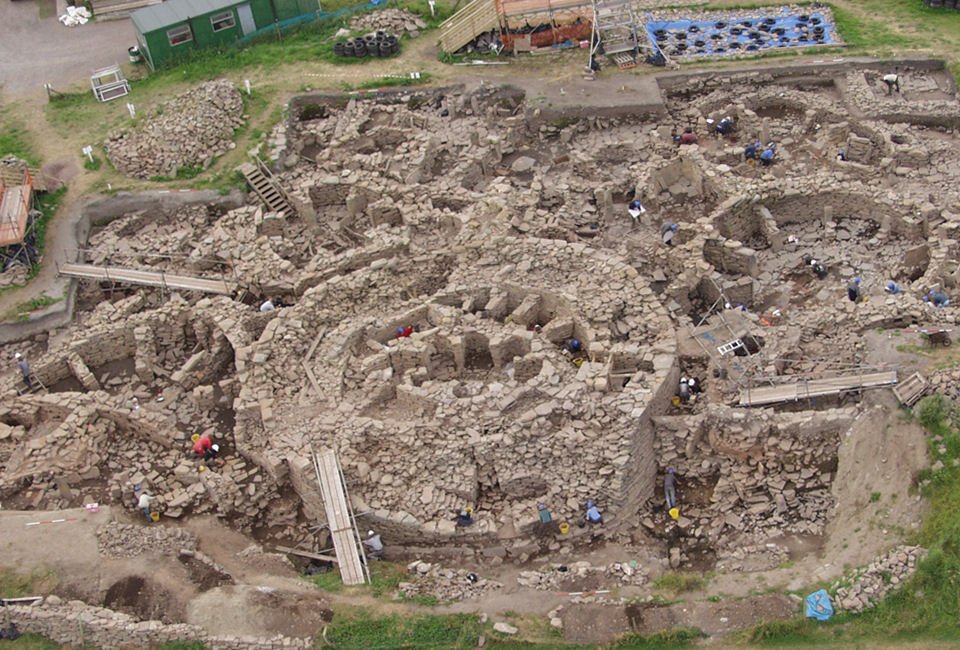 A wheelhouse is a structure found in Scotland, built of stone and roughly circular or egg shaped.  Their characteristic features include an outer wall within which a circle of stone piers (bearing a resemblance to the spokes of a wheel) form the basis for lintel arches supporting corbelled roofing with a hearth at the hub.

In search of the Picts – Elizabeth Sutherland
Roundish or trefoil shaped with stone partitions that radiated from a central hearth like the spokes of a wheel, these are seen as developments of the brochs and belong to the period immediately after the broch era

About a third are double-walled. They range in diameter from 4 to 11.5 metres (13 to 38 feet). Those sites that have been dated tend to fall within the period 25 BC to 380 AD. In the Northern Isles, 72% are found in association with broch sites. No sites in the west have such an association.  According to Wikipedia,  a total of 62 sites have now been identified in the Northern and Western Isles, and on the north coast of Caithness and Sutherland.

Amateur enthusiasts did some excavation in the 19th century, but professional examination of the sites did not begin until the 1930s, when digs were undertaken at Jarlshof and Gurness. “No work of a modern standard was done in the Hebrides until 1946 at Clettreval on North Uist.”

T C Lethbridge believed that many more existed in South Uist, North Uist, Harris, Benbecula and Barra covered in sand and abandoned as the sand blew inland and the sea levels rose.  There may be even more under the sea. 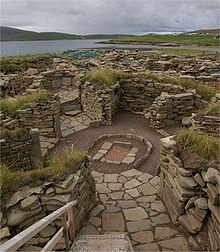 There appears to be an [admittedly declining] view amongst some historians, that wheelhouses were simply houses.  But we now need to heed the words of Dr Sutherland:

Study of the bones revealed that the commonest complaint (47%) was degeneration of the spine.  Those that survived to adulthood seldom lived longer than 30 years.  A man was old at 50.
Incredible though it may seem, Stuart Piggott estimated that it would take as many stones to build one cairn as it would to build five parish churches today.  Maeshowe is thought to have taken 39,000 man-hours to complete.  … So much time and effort was spent in their construction that they must have been of enormous importance to the community

In other words, if you are only going to live 30 years and your job is already pretty back breaking, you are not going to spend a large part of your life, - time one can ill afford to spend given the need to farm, fish, hunt and gather; - building a beautifully laid out and constructed wheelhouse for your family, when it can be built of turf or trees [of which there were many before the climate changed ]. 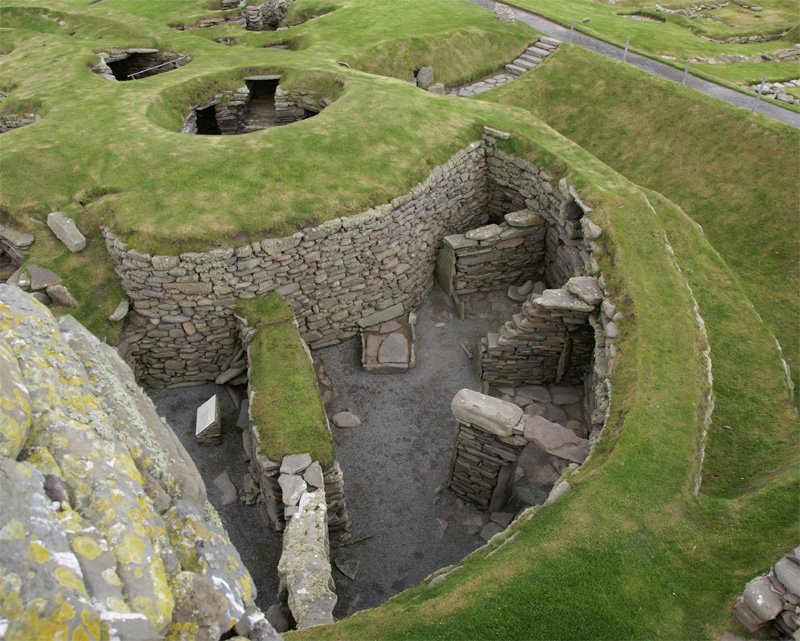 Five sites include menhirs and fifteen a red and black mortar [see symbols below]. These features tends to support the hypothesis that the primary purpose of these buildings was ritualistic. Confusingly therefore, "wheelhouses" are neither wheels, nor houses.

The Wheelhouse was a sacred building and shared, furthermore it is possible it was not only shared by families like a parish church, but by many communities – like a cathedral.  There are some splendid enough, furthermore, to be the St Peters of the Pictish mystic system and we believe they were used for worship, but perhaps more importantly the initiation of the young into the system.  A sort of Sunday school for aspiring mystics.

Many sites incorporate animal burials beneath the floor, the most common bones being those of young lambs.  Long before Christianity took up the symbol of the lamb for Jesus and his flock, mystic systems of all sorts used the lamb as the symbol of a young initiate, an aspiring adept.  The pictures on the Pictish stone slabs simply reinforce the idea of the Hierophant ‘shepherd’, taking care of his baby lambs.  There may even have been symbolic sacrifices of lambs, as if one goes on the spiritual path sacrifice is needed.  It should be noted however, that even if ritual sacrifice was used, the lamb would have been eaten, as no life is taken needlessly in mystic systems.

The Wheel as symbol

The Wheel is a potent symbol in all mystic systems.  It is a symbol of change or evolution, and thus connected with the Great Work.  Depending on the number of spokes, it can represent various aspects of the mystic process.  Wheelhouses in the Pictish system have different numbers of spokes meaning they encompass all these different meanings.

The Wheel of Fire for example, is based on the Wheel with six spokes or the clock and is thus representative of the spiritual path .  Fire symbolises purification, destruction and recreation.  There are a number of stages during the spiritual path where ‘dross’ is burned away – learning, purification and rebirth,  - as such the symbol applies to the whole path not just one stage.

The Wheel of Fortune characteristically has the four stages of life, with four human figures.  It ties in with the Four seasons and the hours [see links].  Fortune can cover any number of different facets of a person’s life.  It can cover their rise to power, it can cover their pecuniary rises and falls, or their love life.  Thus the Wheel of Fortune can be varied and quite fun in its interpretation.  But there is one interpretation that is used in initiation and that is the progress the person is making with respect to the ‘hero’s’ path – the spiritual path of the hero.

The Wheel with twelve spokes can also be used to represent the Four seasons and the hours [see link] in the context of initiation.  Furthermore it has the advantage of being able to be used to explain destiny and the Signs of the Zodiac.  It would have then linked in to the constellations and star lore.

We have shown some well known examples on this page, however, the main example we have used in the following observation is that of A’ Cheardach Bheag on Drimore Machair, South Uist. 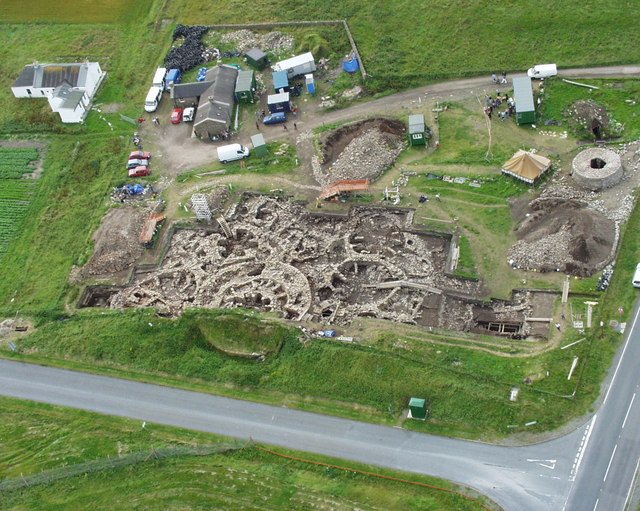 Constellation
Destiny
Egg
Great Work, the
Signs of the Zodiac