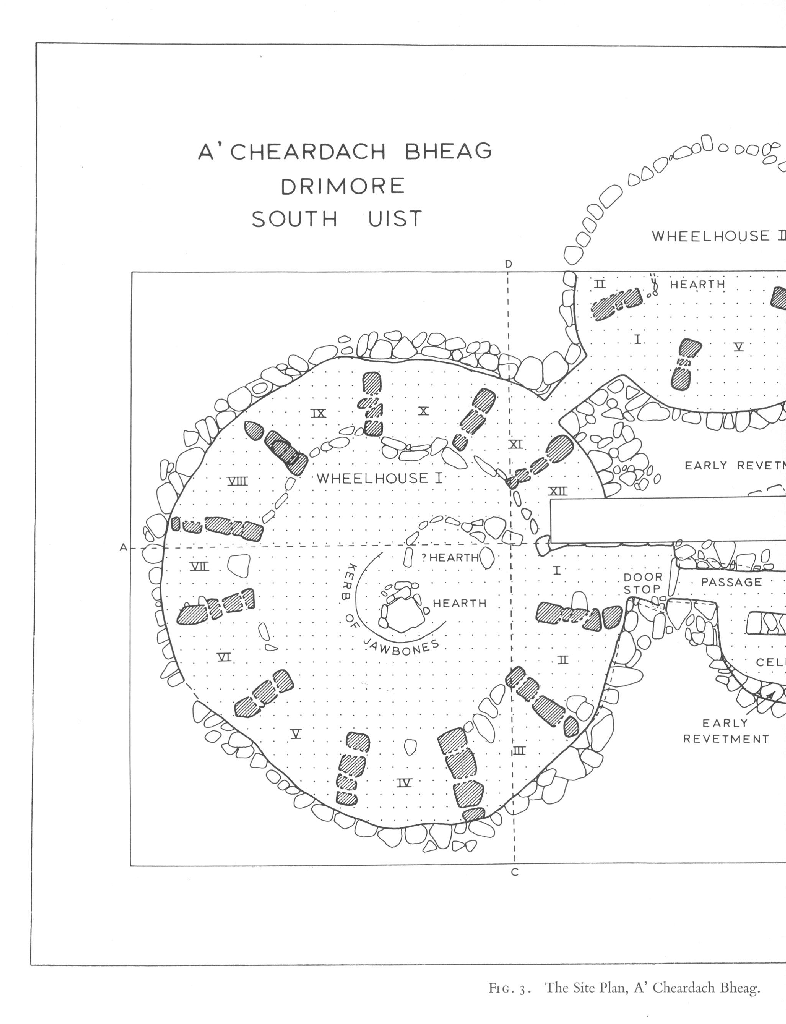 The larger wheelhouse with the 12 spokes had a central ‘hearth’, corresponding symbolically to the unmoving mover, the Ultimate Intelligence.

The space surrounded by the bays had a diameter of about 19 feet…. In the centre of the wheelhouse around a complex hearth, there was a slight mound  which was due rather to a rise in the level of the clean undisturbed sand below than to long ash accumulation

Thus we can see that the central ‘fire’ was not a cooking fire, or even a fire to keep warm, it was a ceremonial fire – a symbolic altar.

Slightly south of the true centre of the wheelhouse there was first of all a setting of flat stones, mostly from one slab cracked into 5 or 6 pieces forming a somewhat irregular oval 32-38 inches across, with a slight hob like extension on the north

This is the holy of holies – the unmoving mover.

.. running in an arc of ellipse about 2 feet 6 inches out from the centre of this hearth, north-north-west via south to south east, there was a kerb lie setting of about 20 bones, each being the half of a red deer mandible, with the ascending ramus thrust into the ground, teeth downwards and each overlapping at least one and normally two of the adjacent bones.  The overlap was consistent, the mandibles running obliquely outwards in a clockwise direction.  The jawbones were not burnt despite close proximity to the hearth

These are symbolic ‘teeth’, the symbolism here is best explored by reference to the symbol section, as it is very difficult to explain otherwise.  Both ‘mountains’ and teeth are being represented from the cosmic egg.

They were in a very friable condition so that it is not possible to state the precise number, but there were at least seventeen and probably twenty. In any case, the kerb may once have been a complete oval. Several slabs had fallen across this hearth.

On the opposite side of the flat stone hearth but still within the area over which the ash was quite continuous, there was another arc-like setting, this time of large weathered slabs on end, facing in the reverse direction, towards the south (Pl. 5). It measured 4 feet 5 inches across at the maximum so that there was a distance of 7 feet from the western limb of the mandible kerb to the eastern end of the upright stones. Removal of the ash revealed depressions as though other stones had once closed the semicircle. A row of slabs led vaguely towards the end of the 'pier' on the northern side of the entrance. Finally, a setting of four small stones at the northwestern corner of this complex hearth gave a slight suggestion of an earlier kerb, otherwise destroyed.

Away from the central hearth, the ash tailed irregularly towards the bays into the normal depth of stained and laminated sand.  There was no evidence of post-holes, nor of settings of stones for sockets and the central area appeared featureless, apart from the hearths. Undoubtedly, deeper excavation than the high water table allowed was highly desirable in principle, but sample investigations were made and in each case the clean undisturbed sand was almost immediately reached.

In effect ash was used to divide the Egg into its constellations, this is both a star map and also the same diagram used in astrology to determine one’s destiny.  There is every reason to believe the wheelhouse was not roofed.  It may have had a temporary roof of skin to keep out the rain – a bit like a tarpaulin cover is used to protect buildings, but children were also brought here to learn the constellations and their movements and to be able to do that the roof had to be open to the stars.

At A' Cheardach Bheag, it seems clear that the bays, except perhaps Bay I, were roofed by oversailing slabs from the peripheral wall, the piers and the 'bridge'. The central area can hardly have been corbelled over, for apart from the span of 19 feet, the fallen masonry was notably small in amount in the centre of the wheelhouse.

Constellation
Destiny
Egg
Great Work, the
Levels and layers
Map of the Egg
Signs of the Zodiac 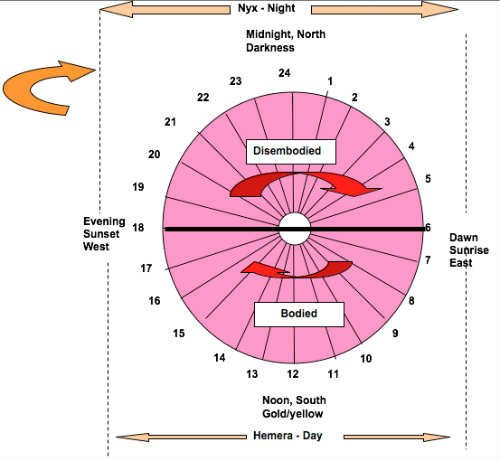