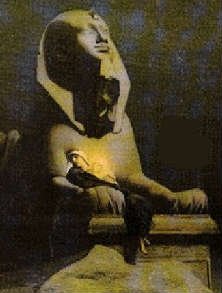 A very complex symbol.  In the animal part we see in part the deep  Subconscious - the autonomic system.  Thus we see in part of the symbolism of the sphinx the animal tendencies – the survival instinct, the animal sensuality, which are traditionally male at this level.

But the sphinx is also in most representations a Lion and the Lion is the symbol of the Intellect.

Both the deep subconscious [autonomic system] and its animal urges [male] and the Intellect [also symbolically male] are blocks to spiritual experience.

Thus the objective of anyone on the spiritual path is to subdue both.  Thus to a certain extent the sphinx is similar to the tamed lion [see Lion].

But the sphinx has an animal lower half [the sexual part and animal urges as well as the Intellect] with a woman’s face  -  the feminine [the emotions and imagination plus creative capability].  The feminine dominates the masculine.

In effect, order to achieve the mystic marriage, the masculine has to embrace and understand the feminine and the marriage is the sphinx.  Thus we often see a man  - representing the masculine intellect and conscious self  - the reasoning learning left brain side of us - embracing a sphinx, meaning he has both come to terms with the idea and is happy for it to happen.

The sphinx in various cultures

The sphinx is a universally recognised symbol worldwide.  Besides the well known sphinx of Egypt we find them in the Middle east and in India. 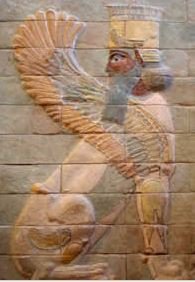 Sometimes only a lion and a man combined,  as in this depiction with the wings, you can only symbolically fly if the Lion is tamed.
The word sphinx comes from the Greek , and from the verb sphingo, meaning "to strangle". This name is indirectly  derived from the fact in non spiritual terms the lionesses kill their prey by strangulation, biting the throat of prey and holding them down until they die.
But in order to tame the lion one must strangle it – subdue it.

Left: Winged sphinx from the palace of Darius the Great during Persian Empire at Susa (480 BC)

In a sense it was symbolically what was being aimed for - the ultimate objective of the Mysteries.