An interesting allegorical way of attempting to discredit the 'old' gods and yet keep the symbolism. 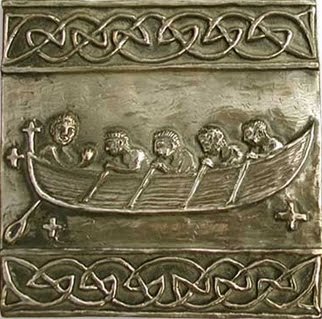 THE ISLAND OF SMITHS

AFTER EIGHT DAYS they caught sight of an island not far away, very rough, rocky and full of slag, without trees or grass, full of smiths' forges. The venerable father said to his brothers:

'l am troubled about this island. I do not want to go on it or even come near it. But the wind is bringing us directly there.'

As they were sailing for a moment beside it, a stone's throw away, they heard the sound of bellows blowing, as if it were thunder, and the blows of hammers on iron and anvils. When he heard this the venerable father armed himself, making the sign of the Lord in all four directions, saying:

'Lord, Jesus Christ, deliver us from this island.'

When the man of God had finished speaking, one of the inhabitants of the island was seen to come out of doors apparently to do something or other.

He was very shaggy and full at once of fire and darkness. When he saw the servants of Christ pass near the island, he went back into his forge. The man of God blessed himself again and said to his brothers:

'My sons, raise the sail higher still and row as fast as you can and let us flee from this island.'

Even before he had finished speaking, the same savage came to the shore near where they were, carrying a tongs in his hands that held a lump of burning slag of immense size and heat. He immediately threw the lump on top of the servants of Christ, but it did no hurt to them. It passed more than two hundred yards above them. Then the sea, where it fell, began to boil, as if a volcano were erupting there. The smoke rose from the sea as from a fiery furnace.