One of the earliest mentions of a visionary city was Jerusalem, which largely represented the culture and beliefs of the Jewish people.  Jerusalem in the Bible was allegorical, an idea, a city like the ones we have seen here, perhaps even the first move towards the idea of a Jewish state combining political and religious systems. 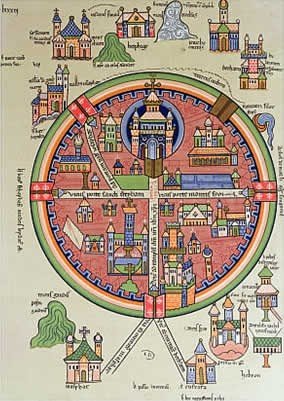 The following extract from Revelations is perhaps the nearest we can get in the Bible to combining the system they wanted – no murderers, no cowardly vile or sexually promiscuous, with the hallucination or vision that effectively symbolises the system.

All the religious paintings of Jerusalem show it to be a conceptual city long before it became a real city.  In the rather beautiful painting below we see the idealised layout of the city based on the egg.  In effect, the city was a microcosm based on the entire spiritual world.  Its layout is that of the egg with an earthen Earth exterior, Water, then the walls surrounding a city split into four quarters with the most important site to the ‘North’.  Thus the Creator/Created section of the egg is on the axis of North South – the celestial pole.

1 Then I saw a new heaven and a new earth, for the first heaven and the first earth had passed away, and there was no longer any sea.

2 I saw the Holy City, the new Jerusalem, coming down out of heaven from God, prepared as a bride beautifully dressed for her husband. ……….

5 He who was seated on the throne said, "I am making everything new!" Then he said, "Write this down, for these words are trustworthy and true."

6 He said to me: "It is done. I am the Alpha and the Omega, the Beginning and the End. To him who is thirsty I will give to drink without cost from the spring of the water of life.

7 He who overcomes will inherit all this, and I will be his God and he will be my son.

8 But the cowardly, the unbelieving, the vile, the murderers, the sexually immoral, those who practice magic arts, the idolaters and all liars—their place will be in the fiery lake of burning sulfur. This is the second death."

9 One of the seven angels who had the seven bowls full of the seven last plagues came and said to me, "Come, I will show you the bride, the wife of the Lamb."

10 And he carried me away in the Spirit to a mountain great and high, and showed me the Holy City, Jerusalem, coming down out of heaven from God.

11 It shone with the glory of God, and its brilliance was like that of a very precious jewel, like a jasper, clear as crystal.

12 It had a great, high wall with twelve gates, and with twelve angels at the gates. On the gates were written the names of the twelve tribes of Israel.

14 The wall of the city had twelve foundations, and on them were the names of the twelve apostles of the Lamb

Fire
Increments of evolution
Signs of the Zodiac