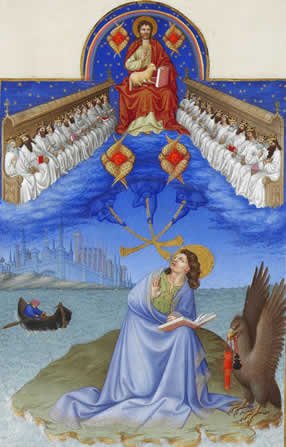 John of Patmos is the name given by some modern scholars to the author of the Book of Revelation, the apocalyptic text forming part of the New Testament. The text of Revelation states that the author is called John and that he lives on the Greek island of Patmos, where by some, he is considered to be in exile as a result of anti-Christian persecution under the Roman emperor Domitian.

Traditionally, the John who is the author of Revelation is considered to be John the Apostle, however, in the case of Revelation, many modern scholars agree that it was written by a separate, otherwise unknown, author, to whom they have given the name John of Patmos.

I, John, both your brother and companion in tribulation... was on the island that is called Patmos for the word of God and for the testimony of Jesus Christ.

Early tradition says that John was banished to Patmos by the Roman authorities. This tradition is credible because banishment was a common punishment used during the Imperial period for a number of offenses. Among such offenses were the practices of magic and astrology. Prophecy was viewed by the Romans as belonging to the same category, whether Pagan, Jewish, or Christian. Prophecy with political implications, like that expressed by John in the book of Revelation, would have been perceived as a threat to Roman political power and order. Three of the islands in the Sporades were places where political offenders were banished. (Pliny Natural History 4.69-70; Tacitus Annals 4.30)

So from this we may gather he was a prisoner in which case ‘losing your independence  and overwhelming fear and terror probably played quite a large part in his visions.  He has just the touch of the William Blake about him at times which made me wonder whether he was manic depressive.

Many people mistakenly call the last book of the Christian Bible “Revelations.” It is actually the (one) Revelation to John. Elaine Pagels may be playing on that common error with the title of her latest book, “Revelations,” though in this case it is accurate: she ­places the biblical Book of Revelation in the context of other ancient narratives of visions and prophecy. Her account highlights several prophetic works and visionaries, from Ezekiel to Paul to the ancient sect of prophesying Christians called the Montanists, and others.

Pagels also discusses the afterlife of Revelation in the Christianity of late antiquity through the fourth century. Her thesis is that apocalyptic literature — visions, prophecies, predictions of cataclysm — has always carried political ramifications, both revolutionary and reactionary, liberal and conservative, from the very beginning up until today, as seen in conservative iterations of millennial dispensationalism and the hugely popular “Left Behind” series of novels about the end of the world. The apocalyptic is political.

“Revelation” is from the Latin translation of the Greek word apocalypsis, which can designate any unveiling or revealing, fantastic or ordinary. Scholars also refer to the document as the Apocalypse of John. And that same Greek word provides the label for all sorts of ancient literature that scholars call “apocalyptic.” The biblical text purports to relate a real vision experienced by an otherwise unknown Jew named John — not the Apostle John, nor the same person as the anonymous author of what we call the Gospel of John. But we have no reason to doubt that his name was really John. It wasn’t an unusual name for a Jew.

John wrote his vision, prefaced with messages to seven churches in Asia Minor (modern western Turkey), from the island of Patmos in the Aegean Sea. We may imagine John, Pagels suggests, as an old Jew who had lived through the Jewish war with Rome, during which Jerusalem was decimated and the Temple destroyed in the year 70. He may have seen the thousands of Jews killed and thousands of others carried to Rome as slaves. Bitter about the dominating imperial power, he may have wandered through Syria and Asia Minor, along the way meeting other followers of the crucified prophet Jesus, other “cells” of worshipers of the Jewish Messiah who was killed and mysteriously raised from the dead.

But when he gets to western Asia Minor, he comes across many gentile Christians, quite possibly in churches founded by the now dead Apostle Paul. Unlike John, they seem to be relatively well off. They usually get along fine with their non-Christian neighbors. They may be prospering from the Pax Romana, the “peace” sustained by Roman domination. They are marrying and having children, running their small businesses, ignoring the statues, temples and worship of other gods that surround them.

For John, this Christian toleration of Rome and its idols is offensive. This is not a benign governmental power. It is the Whore of Babylon, arrogantly destroying the earth. John writes (in this theory) to warn the churches, and he relates his vision to provoke alarm at the Evil Empire. That vision predicts the destruction of Rome by angelic armies, followed by the salvation of faithful disciples of the bloody, horned warrior-lamb Jesus. Those who resist will, in the end, be rewarded.

The Apocalypse, the Revelation to John, has over the centuries been read by many Christians to predict events that might happen in their own time. In the 1980s, journalists discussed President Ronald Reagan’s statements that biblical prophecies might be fulfilled in our days............................
REVELATIONS:  Visions, Prophecy, and Politics in the Book of Revelation  By Elaine Pagels