Through the Looking Glass - Ch 01 - 1 Kitty and the Mirror 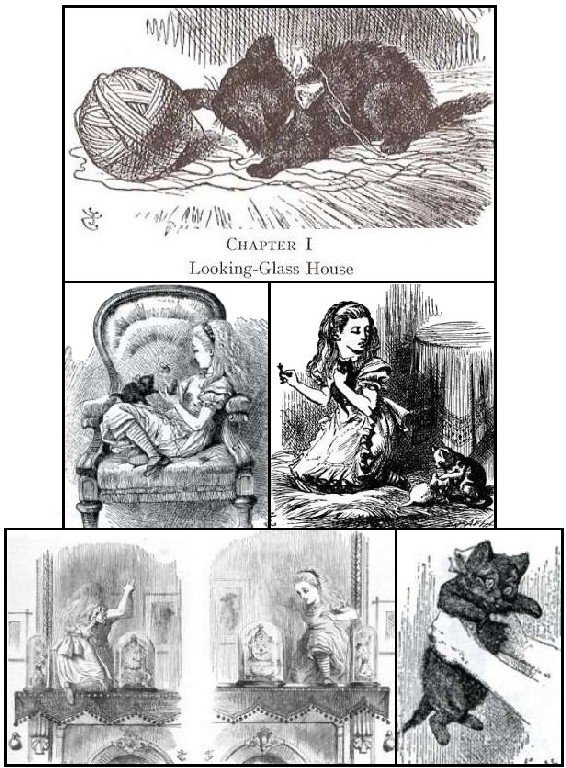 One thing was certain, that the WHITE kitten had had nothing to do with it:--it was the black kitten's fault entirely. For the white kitten had been having its face washed by the old cat for the last quarter of an hour (and bearing it pretty well, considering); so you see that it COULDN'T have had any hand in the mischief.

The way Dinah washed her children's faces was this: first she held the poor thing down by its ear with one paw, and then with the other paw she rubbed its face all over, the wrong way, beginning at the nose: and just now, as I said, she was hard at work on the white kitten, which was lying quite still and trying to purr--no doubt feeling that it was all meant for its good.

But the black kitten had been finished with earlier in the afternoon, and so, while Alice was sitting curled up in a corner of the great arm-chair, half talking to herself and half asleep, the kitten had been having a grand game of romps with the ball of worsted Alice had been trying to wind up, and had been rolling it up and down till it had all come undone again; and there it was, spread over the hearth-rug, all knots and tangles, with the kitten running after its own tail in the middle.

'Oh, you wicked little thing!' cried Alice, catching up the kitten, and giving it a little kiss to make it understand that it was in disgrace. 'Really, Dinah ought to have taught you better manners! You OUGHT, Dinah, you know you ought!' she added, looking reproachfully at the old cat, and speaking in as cross a voice as she could manage--and then she scrambled back into the arm-chair, taking the kitten and the worsted with her, and began winding up the ball again. But she didn't get on very fast, as she was talking all the time, sometimes to the kitten, and sometimes to herself. Kitty sat very demurely on her knee, pretending to watch the progress of the winding, and now and then putting out one paw and gently touching the ball, as if it would be glad to help, if it might.

'Do you know what to-morrow is, Kitty?' Alice began. 'You'd have guessed if you'd been up in the window with me--only Dinah was making you tidy, so you couldn't. I was watching the boys getting in sticks for the bonfire--and it wants plenty of sticks, Kitty! Only it got so cold, and it snowed so, they had to leave off. Never mind, Kitty, we'll go and see the bonfire to-morrow.' Here Alice wound two or three turns of the worsted round the kitten's neck, just to see how it would look: this led to a scramble, in which the ball rolled down upon the floor, and yards and yards of it got unwound again.

'Do you know, I was so angry, Kitty,' Alice went on as soon as they were comfortably settled again, 'when I saw all the mischief you had been doing, I was very nearly opening the window, and putting you out into the snow! And you'd have deserved it, you little mischievous darling! What have you got to say for yourself? Now don't interrupt me!' she went on, holding up one finger. 'I'm going to tell you all your faults. Number one: you squeaked twice while Dinah was washing your face this morning. Now you can't deny it, Kitty: I heard you! What's that you say?' (pretending that the kitten was speaking.) 'Her paw went into your eye? Well, that's YOUR fault, for keeping your eyes open--if you'd shut them tight up, it wouldn't have happened. Now don't make any more excuses, but listen! Number two: you pulled Snowdrop away by the tail just as I had put down the saucer of milk before her! What, you were thirsty, were you? How do you know she wasn't thirsty too? Now for number three: you unwound every bit of the worsted while I wasn't looking!

'That's three faults, Kitty, and you've not been punished for any of them yet. You know I'm saving up all your punishments for Wednesday week--Suppose they had saved up all MY punishments!' she went on, talking more to herself than the kitten. 'What WOULD they do at the end of a year? I should be sent to prison, I suppose, when the day came. Or--let me see--suppose each punishment was to be going without a dinner: then, when the miserable day came, I should have to go without fifty dinners at once! Well, I shouldn't mind THAT much! I'd far rather go without them than eat them!

'Do you hear the snow against the window-panes, Kitty? How nice and soft it sounds! Just as if some one was kissing the window all over outside. I wonder if the snow LOVES the trees and fields, that it kisses them so gently? And then it covers them up snug, you know, with a white quilt; and perhaps it says, "Go to sleep, darlings, till the summer comes again." And when they wake up in the summer, Kitty, they dress themselves all in green, and dance about--whenever the wind blows--oh, that's very pretty!' cried Alice, dropping the ball of worsted to clap her hands. 'And I do so WISH it was true! I'm sure the woods look sleepy in the autumn, when the leaves are getting brown.

'Kitty, can you play chess? Now, don't smile, my dear, I'm asking it seriously. Because, when we were playing just now, you watched just as if you understood it: and when I said "Check!" you purred! Well, it WAS a nice check, Kitty, and really I might have won, if it hadn't been for that nasty Knight, that came wiggling down among my pieces. Kitty, dear, let's pretend--' And here I wish I could tell you half the things Alice used to say, beginning with her favourite phrase 'Let's pretend.' She had had quite a long argument with her sister only the day before—all because Alice had begun with 'Let's pretend we're kings and queens;' and her sister, who liked being very exact, had argued that they couldn't, because there were only two of them, and Alice had been reduced at last to say, 'Well, YOU can be one of them then, and I'LL be all the rest.' And once she had really frightened her old nurse by shouting suddenly in her ear, 'Nurse! Do let's pretend that I'm a hungry hyaena, and you're a bone.'

But this is taking us away from Alice's speech to the kitten. 'Let's pretend that you're the Red Queen, Kitty! Do you know, I think if you sat up and folded your arms, you'd look exactly like her. Now do try, there's a dear!' And Alice got the Red Queen off the table, and set it up before the kitten as a model for it to imitate: however, the thing didn't succeed, principally, Alice said, because the kitten wouldn't fold its arms properly. So, to punish it, she held it up to the Looking-glass, that it might see how sulky it was--'and if you're not good directly,' she added, 'I'll put you through into Looking-glass House. How would you like THAT?'

'Now, if you'll only attend, Kitty, and not talk so much, I'll tell you all my ideas about Looking-glass House. First, there's the room you can see through the glass--that's just the same as our drawing room, only the things go the other way. I can see all of it when I get upon a chair--all but the bit behind the fireplace. Oh! I do so wish I could see THAT bit! I want so much to know whether they've a fire in the winter: you never CAN tell, you know, unless our fire smokes, and then smoke comes up in that room too--but that may be only pretence, just to make it look as if they had a fire. Well then, the books are something like our books, only the words go the wrong way; I know that, because I've held up one of our books to the glass, and then they hold up one in the other room.

'How would you like to live in Looking-glass House, Kitty? I wonder if they'd give you milk in there? Perhaps Looking-glass milk isn't good to drink--But oh, Kitty! now we come to the passage. You can just see a little PEEP of the passage in Looking-glass House, if you leave the door of our drawing-room wide open: and it's very like our passage as far as you can see, only you know it may be quite different on beyond. Oh, Kitty! how nice it would be if we could only get through into Looking-glass House! I'm sure it's got, oh! such beautiful things in it! Let's pretend there's a way of getting through into it, somehow, Kitty. Let's pretend the glass has got all soft like gauze, so that we can get through. Why, it's turning into a sort of mist now, I declare! It'll be easy enough to get through--' She was up on the chimney-piece while she said this, though she hardly knew how she had got there. And certainly the glass WAS beginning to melt away, just like a bright silvery mist.

In another moment Alice was through the glass, and had jumped lightly down into the Looking-glass room.