In effect, bones take their symbolism from the fact that they are crystal structures and thus are representative of Form. 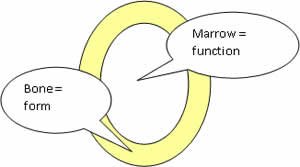 Their symbolism is also derived from the perceived effects of the kundalini experience, which sends waves of energy up the spine.

The spine in particular with its hollow centre then takes on especial significance as its hollow nature and soft bone marrow is a particularly apt symbol for the hard form and the soft spirit.

In yet another strange literalisation of what was a symbolic association, a number of older cultures now take this literally – they literally believe the soul is to be found in the bone marrow or in the actual bones  of the person or animal.

This has led to some odd beliefs and rituals, for example………..

In shamanistic societies throughout the world bone has special significance and is associated with spirit..  For instance, the Huichol of Central America believe that the spirit, or soul of a person lodges in the top of the head and in the bone that grows over the fontanel in the months after birth.  The Iriquois of North America have a development of this ….  Their word for ‘burned bones’ [uq-sken-ra-ri] also means the soul as ‘animated skeleton’ or ‘ghost’……….. Around the world, notions of a skeletal soul and rebirth from bones are expressed ritually.  The Warao of Venezuela, for example, place fish bones into the walls and thatch of dwellings in the belief that this display of respect will lead to new fish being born; fish and animals, like people are believed to have souls.