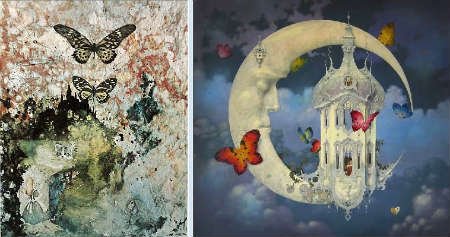 A butterfly or moth is a fully enlightened person, one who is free of the Earth and is able to symbolically ‘fly’ in the Air [or higher]. The symbolism derives from a whole host of related aspects.

The first level of symbolism is based on the link to the caterpillar.  The caterpillar looks like the spine and the spine is the source of the kundalini experience.

The next form of symbolism is also anatomical and is based on the close similarity the pelvic bone has to a butterfly.

In the kundalini experience the source of energy is the sacrum.  As can be seen the entire structure looks like a butterfly with opened wings.

Even more important symbolically is that the spine when looked at in cross section has a butterfly central core which contains nerves and cerebrospinal fluid.  Again this central core is the key source of the sensations of the kundalini experience.

The next form of symbolism is based on the close affinity moths in particular have for fire and flames.

There is also a link with reincarnation – because a caterpillar goes through a number of stages before it becomes a butterfly – first it is an egg [so there is a link with Egg symbolism];  then it becomes a soft creature – the caterpillar;  then a chrysalis, a creature with a ‘shell’ – in effect the entrapped soul within the body where the shell has similar symbolism to ‘clay’ in this context; then finally the entrapped spirit breaks free and can fly up to heaven!  It is at this stage it has merged with its Higher spirit.  Thus the symbolism generally implies only the merge of the soul with the Higher spirit.  Under certain circumstances, however, the butterfly can represent one who has achieved annihilation.  Burnt by the flame.

The successive stages of the butterfly imply many lives before the freed spirit is ‘born’.  Thus the symbolism incorporates the idea that one many have to go through many incarnations before the final stage is reached

In the two realms of light and darkness, the moth is the butterfly’s equivalent in the dark.

A butterfly is beautiful, as are all enlightened beings merged with their Higher spirits; it can flit all over the place;  feeds on nectar from flowers ; it is relatively speaking short lived.    A person who is enlightened does not live long in the scheme of things and all butterflies are embodied.  It is fragile, easily crushed or killed, so vulnerable; and it is attracted to the Light, …………… 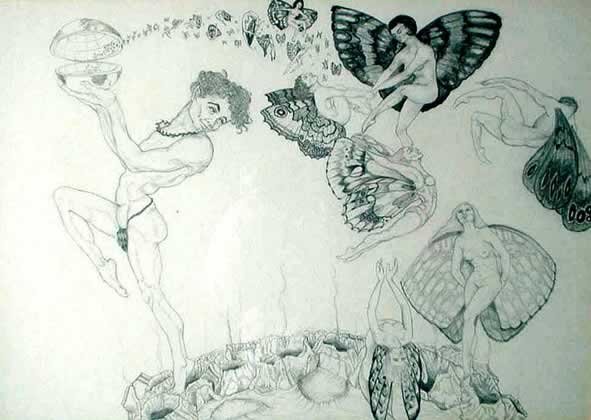