Alice in Wonderland - Ch 05 - 1 Advice from a Caterpillar 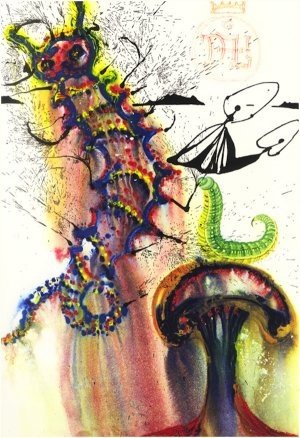 CHAPTER V. Advice from a Caterpillar

The Caterpillar and Alice looked at each other for some time in silence: at last the Caterpillar took the hookah out of its mouth, and addressed her in a languid, sleepy voice.

'Who are YOU?' said the Caterpillar.

This was not an encouraging opening for a conversation. Alice replied, rather shyly, 'I--I hardly know, sir, just at present--at least I know who I WAS when I got up this morning, but I think I must have been changed several times since then.'

'What do you mean by that?' said the Caterpillar sternly. 'Explain yourself!'

'I can't explain MYSELF, I'm afraid, sir' said Alice, 'because I'm not myself, you see.'

'I don't see,' said the Caterpillar.

'I'm afraid I can't put it more clearly,' Alice replied very politely, 'for I can't understand it myself to begin with; and being so many different sizes in a day is very confusing.'

'It isn't,' said the Caterpillar.

'Well, perhaps you haven't found it so yet,' said Alice; 'but when you have to turn into a  chrysalis--you will some day, you know--and then after that into a butterfly, I should think you'll feel it a little queer, won't you?'

'Not a bit,' said the Caterpillar.

'Well, perhaps your feelings may be different,' said Alice; 'all I know is, it would feel very queer to ME.'

'You!' said the Caterpillar contemptuously. 'Who are YOU?'

Which brought them back again to the beginning of the conversation.

Alice felt a little irritated at the Caterpillar's making such VERY short remarks, and she drew herself up and said, very gravely, 'I think, you ought to tell me who YOU are, first.'

'Why?' said the Caterpillar.

Here was another puzzling question; and as Alice could not think of any good reason, and as the Caterpillar seemed to be in a VERY unpleasant state of mind, she turned away.

'Come back!' the Caterpillar called after her. 'I've something important to say!'

This sounded promising, certainly: Alice turned and came back again.

'Keep your temper,' said the Caterpillar.

'Is that all?' said Alice, swallowing down her anger as well as she could.

'No,' said the Caterpillar.

Alice thought she might as well wait, as she had nothing else to do, and perhaps after all it might tell her something worth hearing. For some minutes it puffed away without speaking, but at last it unfolded its arms, took the hookah out of its mouth again, and said, 'So you think you're changed, do you?'

'I'm afraid I am, sir,' said Alice; 'I can't remember things as I used--and I don't keep the same size for ten minutes together!'

'Well, I've tried to say "HOW DOTH THE LITTLE BUSY BEE," but it all came different!' Alice replied in a very melancholy voice.

'Repeat, "YOU ARE OLD, FATHER WILLIAM,"' said the Caterpillar.

Alice folded her hands, and began:--

'You are old, Father William,' the young man said,
'And your hair has become very white;
And yet you incessantly stand on your head--
Do you think, at your age, it is right?'

'In my youth,' Father William replied to his son,
'I feared it might injure the brain;
But, now that I'm perfectly sure I have none,
Why, I do it again and again.'

'You are old,' said the youth, 'as I mentioned before,
And have grown most uncommonly fat;
Yet you turned a back-somersault in at the door--
Pray, what is the reason of that?'

'In my youth,' said the sage, as he shook his grey locks,
'I kept all my limbs very supple
By the use of this ointment--one shilling the box--
Allow me to sell you a couple?'

'You are old,' said the youth, 'and your jaws are too weak
For anything tougher than suet;
Yet you finished the goose, with the bones and the beak--
Pray how did you manage to do it?'

'In my youth,' said his father, 'I took to the law,
And argued each case with my wife;
And the muscular strength, which it gave to my jaw,
Has lasted the rest of my life.'

'You are old,' said the youth, 'one would hardly suppose
That your eye was as steady as ever;
Yet you balanced an eel on the end of your nose--
What made you so awfully clever?'

'I have answered three questions, and that is enough,'
Said his father; 'don't give yourself airs!
Do you think I can listen all day to such stuff?
Be off, or I'll kick you down stairs!'

'That is not said right,' said the Caterpillar.

'Not QUITE right, I'm afraid,' said Alice, timidly; 'some of the words have got altered.'

'It is wrong from beginning to end,' said the Caterpillar decidedly, and there was silence for some minutes.

The Caterpillar was the first to speak.

'What size do you want to be?' it asked.

'Oh, I'm not particular as to size,' Alice hastily replied; 'only one doesn't like changing so often, you know.'

'I DON'T know,' said the Caterpillar.

Alice said nothing: she had never been so much contradicted in her life before, and she felt that she was losing her temper.

'Well, I should like to be a LITTLE larger, sir, if you wouldn't mind,' said Alice: 'three inches is such a wretched height to be.'

'It is a very good height indeed!' said the Caterpillar angrily, rearing itself upright as it spoke (it was exactly three inches high).

'But I'm not used to it!' pleaded poor Alice in a piteous tone. And she thought of herself, 'I wish the creatures wouldn't be so easily offended!'

'You'll get used to it in time,' said the Caterpillar; and it put the hookah into its mouth and began smoking again.

This time Alice waited patiently until it chose to speak again. In a minute or two the Caterpillar took the hookah out of its mouth and yawned once or twice, and shook itself. Then it got down off the mushroom, and crawled away in the grass, merely remarking as it went, 'One side will make you grow taller, and the other side will make you grow shorter.'

'Of the mushroom,' said the Caterpillar, just as if she had asked it aloud; and in another moment it was out of sight.