The term armlet means an arm ring  that is positioned  just below the upper shoulder.

The origin of the term 'bracelet' is from the Greek 'brachile' meaning 'of the arm', via the Old French 'barcel'.

But a  bracelet is also a small brace or bracer and this is an arm-guard used by archers.  And here we have the key connection, because by extension anyone wearing or being given a bracelet or armlet is being given their ‘wings’, their chance to fly, as the symbolism derives from that of the arrow and the bow.

It is also ring shaped and thus takes on the symbolism of all rings in that it represents a level or layer.

Thus to be given a bracelet that has red or orange jewels, rubies for example,  in it means you have probably reached the fire level.  A bracelet with saphires and hence blue means attainment of the water level.  A diamond bracelet is the symbol of enlightenment – you have reached the aether level.

The bracelet in palmistry or cheiromancy in cntrats has an altogether different meaning, which is best explained by this quote

Palmistry for all - Cheiro

The Bracelets (3-3, Plate XX.) are of very little importance except to throw light on certain points of health. There are supposed to be three of these lines or bracelets at the wrist, which were called by the Greeks the Bracelets of Health, Wealth, and Happiness.

It is certainly very seldom that they can be found together, for experience in life does not give much hope that these three much-sought-after possessions can ever be found together on this side of the grave.

Delving back into the ancient legends of Greece, we find one very significant point in reference to the first bracelet, the one nearest the palm, which represents Health.

It appears that at one period of the ancient Greek civilisation all women had to come to the priest at their Temple to have their hands examined before they were allowed to marry. If the priest found this first Bracelet out of its place and rising up into the hand in the shape of an arch (4, Plate XX.), he would not allow the woman possessing this sign to be married under any circumstance, the idea being that it represented some internal malformation that would prevent her bringing children into the world. In such cases these women were made Vestal Virgins in the temples. Perhaps the old Greek Priest was right in his idea, for if this first Bracelet is found rising into the hand in the form of an arch, both men and women possessing it are delicate internally, and especially so in matters relating to sex.

Plate XX. THE GIRDLE OF VENUS, THE RING OF SATURN, THE THREE BRACELETS, THE LINE OF INTUITION AND THE VIA LASCIVA. 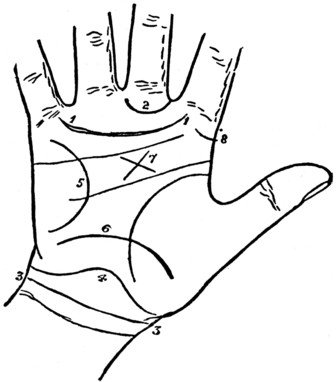