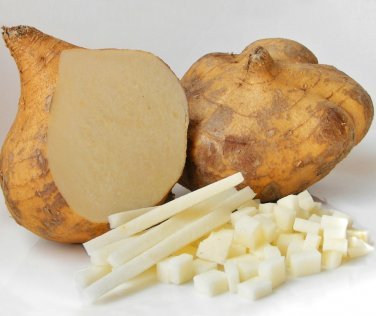 Pachyrhizus erosus, commonly known as jicama (from Nahuatl xīcamatl), Mexican yam bean, Mexican turnip, or simply Yambean, is the name of a native Mexican vine, although the name most commonly refers to the plant's edible tuberous root. Jícama is a species in the genus Pachyrhizus in the bean family (Fabaceae).

Other names for Pachyrhizus erosus include Mexican potato, ahipa, saa got, and Chinese potato. In Ecuador and Peru, the name jicama is used for the unrelated yacón or Peruvian ground apple, a plant of the sunflower family whose tubers are also used as food, which is why we have chosen to use the common name Yambean instead.

The Yambean is principally used for food, but it also has some extra and useful medicinal properties.

The two cultivated forms of P. erosus are jicama de agua and jicama de leche: both named for the consistency of their juice. The leche form has an elongated root and milky juice while the agua form has a top-shaped to oblate root, and a more-watery translucent juice. 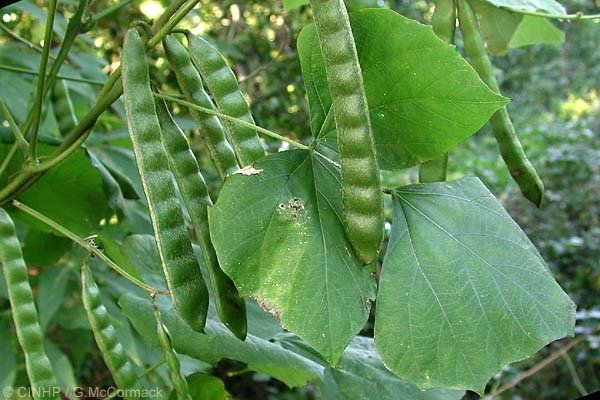 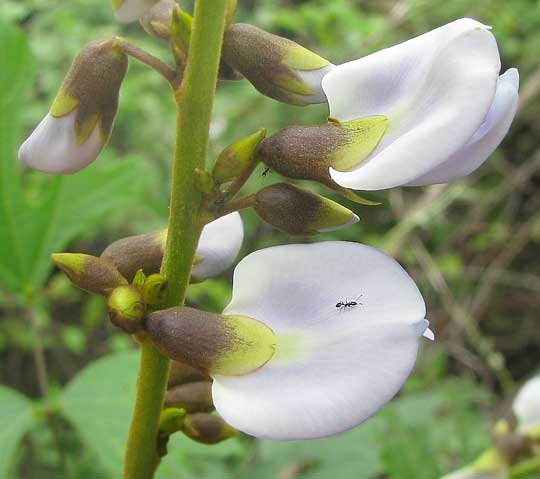 The Yambean is a vine, which can reach a height of 4–5 m given suitable support. Its root can attain lengths of up to 2 m and weigh up to 20 kg. The heaviest jícama root ever recorded weighed 23 kg and was found in 2010 in the Philippines (where they are called singkamas).

Flowers, either blue or white, and pods similar to lima beans, are produced on fully developed plants.

The Yambean is native to Mexico, however, the Spaniards spread cultivation of jícama from Mexico to the Philippines (where it is known as singkamas, from Nahuatl xicamatl), from there it went to China and other parts of Southeast Asia, including the Philippines, Indonesia, Singapore and Malaysia.  In Malay, it is known by the name ubi sengkuang. In Indonesia, jícama is known as bengkuang. Padang a city in West Sumatra is called "the city of bengkuang". 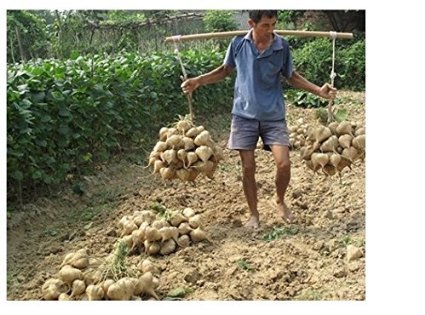 It is known by its Chinese name bang kuang to the ethnic Chinese in Southeast Asia. In Mandarin Chinese, it is known as dòushǔ(豆薯) or liáng shǔ (涼薯), as sa1 got3 沙葛 (same as "turnip") in Yue Chinese/Cantonese, and as bông-kong 芒光 in Teochew, where the word is borrowed from the Malay, and as dìguā 地瓜 in Guizhou province and several neighboring provinces of China, the latter term being shared with sweet potatoes.

In Japanese, it is known as 葛芋 (kuzu-imo). In Myanmar, it is called စိမ္းစားဥ (Sane-saar-u). Its Thai name is มันแกว (man kaeo). In Bengali, it is known as shankhalu (শাঁখ আলু), literally translating to "conch (shankha, শাঁখ) potato (alu, আলু)" for its shape, size and colour. In Hindi, it is known as mishrikand (मिश्रीकंद). It is eaten during fast (उपवास) in Bihar (India) and is known as kesaur (केसौर). In Odia, it is known as (ଶଙ୍ଖ ସାରୁ) Shankha Saru. In Laos, it is called man pao, smaller and tastes a little sweeter than the Mexican type. 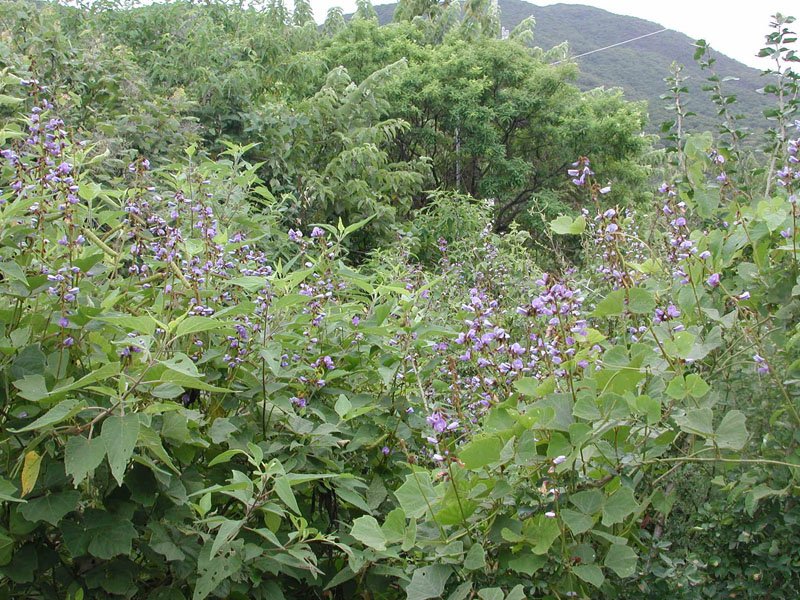 The Yambean is frost-tender and requires 9 months without frost for a good harvest of large tubers or to grow it commercially. It is worth growing in cooler areas that have at least five months without frost, as it will still produce tubers, but they will be smaller. Warm, temperate areas with at least five months without frost can start seed 8 to 10 weeks before the last spring frost. Bottom heat is recommended, as the seeds require warm temperatures to germinate, so the pots will need to be kept in a warm place. Jicama is unsuitable for areas with a short growing season unless cultured in a greenhouse. Tropical areas can sow seed anytime of the year. Subtropical areas should sow seed once the soil has warmed in the spring. 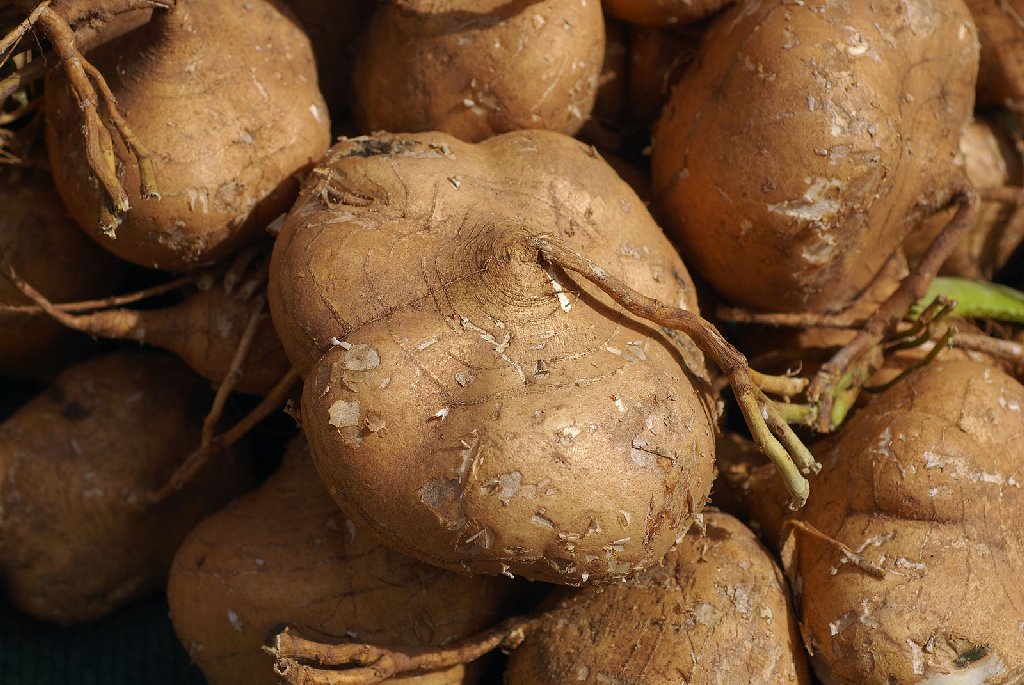 In contrast to the root, the remainder of the jícama plant is poisonous if ingested.  But some of the chemicals have found a use against EXTERNAL parasites.  Dr Duke’s analysis shows that 12-ALPHA-HYDROXYROTENONE in the plant is a general insecticide and pesticide, but specifically has Antiscabies activity.  ROTENONE in the seed  is an Insecticide; Larvicide; Pediculicide; Pesticide; Piscicide; Pulicide; and Scabicide [lethal to Sarcoptes scabiei, the cause of scabies]!  But one would have to be careful about using either of these externally, not using any extract on an open wound as Rotenone is also a Convulsant. 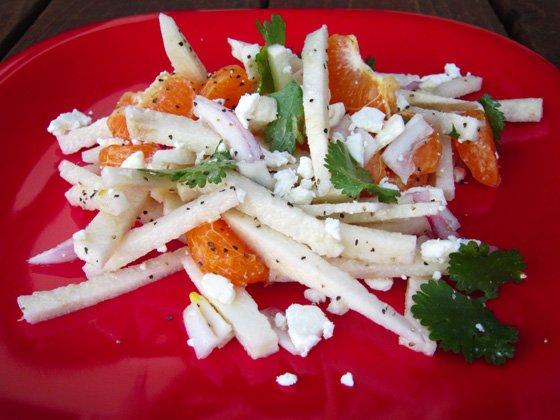 The Yambean tuber, in contrast, is high in carbohydrates in the form of dietary fibre, is composed of 86–90% water and contains only trace amounts of protein and lipids. Its sweet flavour comes from the oligofructose inulin (also called fructo-oligosaccharide) which is a prebiotic.  We have two observations that show it has healing potential for those with diabetes.

Another activity worthy of note and exerted via the natural chemical ADENINE is that the tuber is Anti-Granulocytopenia.  This illness is an abnormally low concentration of granulocytes in the blood. This condition reduces the body's resistance to many infections. Closely related terms include agranulocytosis (etymologically, "no granulocytes at all"; clinically, granulocyte levels less than 5% of normal). Granulocytes live only one to two days in circulation (four days in spleen or other tissue), so transfusion of granulocytes as a therapeutic strategy would confer a very short-lasting benefit. In addition, there are many complications associated with such a procedure.  As such, this activity is of exceptional importance. 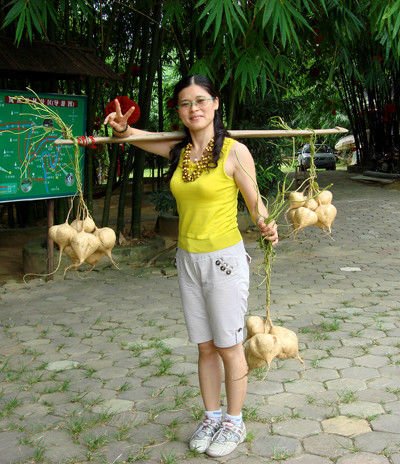 The Yambean is high in carbohydrates in the form of dietary fibre and is high in amino acids [see the Dr Duke analysis].  The Yambean is very low in saturated fat, cholesterol and sodium. It is a good source of potassium and Vitamin C.  Another area of interest is that it is a good source of ‘thickeners’ but gluten free, as such it is a useful substitute to cornflour in sauces.

The study was carried out in order to determine and establish the functional characters of starch extracted from yam bean (Pachyrhizus erosus (L) Urban) compared with cassava starch. Yam bean is a tropical tuber legume easily grown and holds a great potential as a new source of starch. Yam bean starch shows functional properties which are peculiar to those of most starch root crops. Gelatinization temperature (53-63 degrees C) and the pasting temperature (64.5 degrees C) are less than those of cereal starch, however, the swelling power is high (54.4 g gel/g dried starch). Yam bean starch paste presents a high viscosity profile, high retrogradation tendency and low stability on cooking. The functional properties of yam bean starch, similar to those of cassava starch, allows yam bean to be used as a potential new source of starch.  PMID: 12676508

The USDA Nutrients database analysis is as follows: 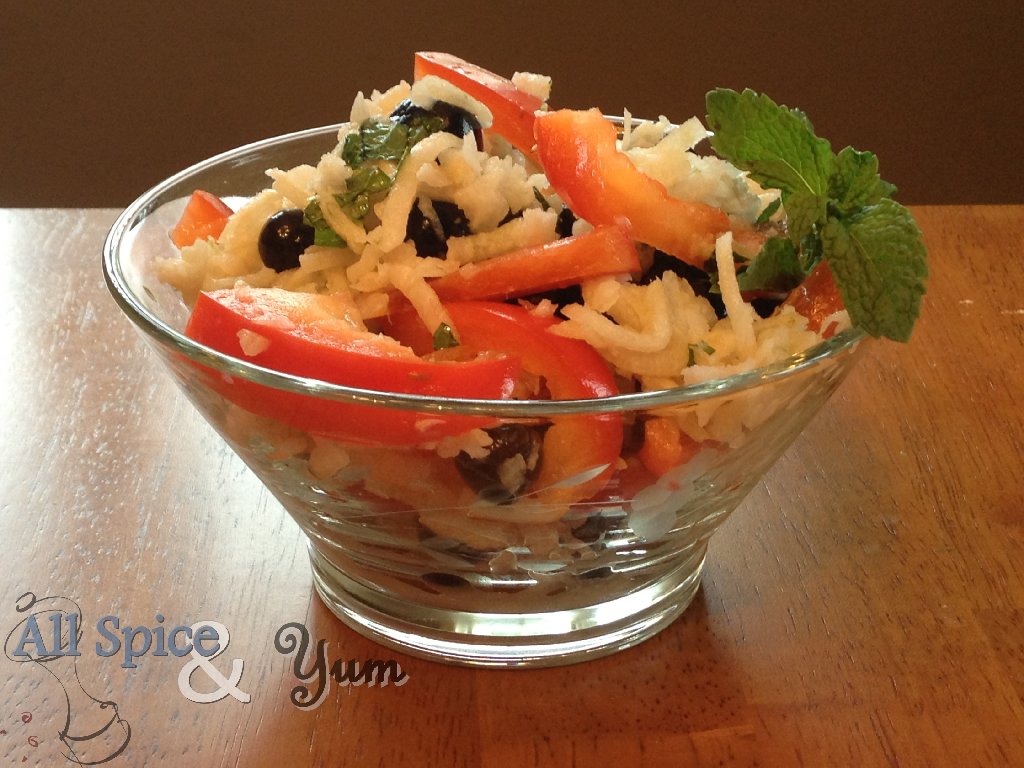 After removal of the thick skin, the white flesh of the root can be eaten cooked or raw. The flesh is crisp, moist, and slightly sweet.

The root's exterior is yellow and papery, while its inside is creamy white with a crisp texture that resembles raw potato or pear. The flavor is sweet and starchy, reminiscent of some apples or raw green beans, and it is usually eaten raw, sometimes with salt, lemon, or lime juice and chili powder.

It is also cooked in soups and stir-fried dishes. Jícama is often paired with chili powder, cilantro, ginger, lemon, lime, orange, red onion, salsa, sesame oil, grilled fish, and soy sauce. It can be cut into thin wedges and dipped in salsa. In Mexico, it is popular in salads, fresh fruit combinations, fruit bars, soups, and other cooked dishes. 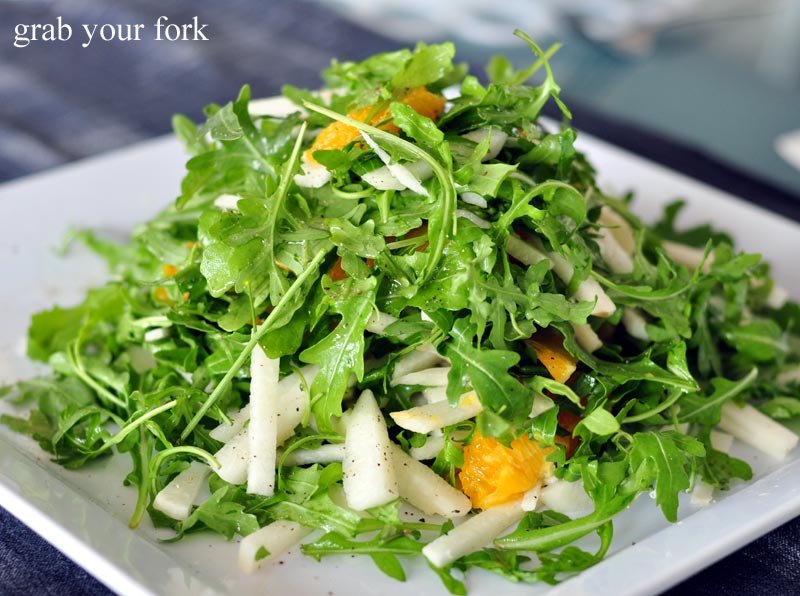 rocket, jicama and orange segments in a spicy lime dressing

In the Philippines, jícama is usually eaten fresh with condiments such as rice vinegar and sprinkled with salt, or with bagoong (shrimp paste). In Indonesia, jícama is known as bengkuang and eaten at fresh fruit bars or mixed in the rojak (a kind of spicy fruit salad).

Jícama has become popular in Vietnamese food as an ingredient in pie, where it is called cây củ đậu (in northern Vietnam) or củ sắn or sắn nước (in southern Vietnam).

Yambeans should be stored dry, between 12 and 16 °C (53 and 60 °F). As colder temperatures will damage the roots, they should not be refrigerated. A fresh root stored at an appropriate temperature will keep for a month or two. 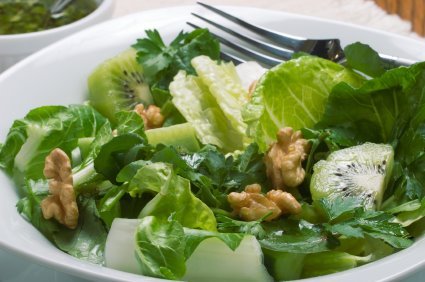