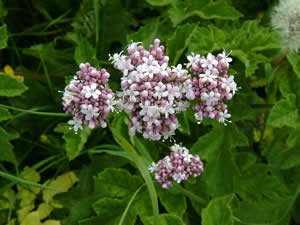 Valerian (Valeriana officinalis, Valerianaceae) is a perennial flowering plant, with heads of sweetly scented pink or white flowers that bloom in the summer months.  Native to Europe and parts of Asia, Valerian has also been introduced into North America. Its leaves are consumed as food by the larvae of some Lepidoptera (butterfly and moth) species including Grey Pug.

Other names used for this plant include garden valerian, garden heliotrope and all-heal, which should give you some idea how it is regarded.  Red valerian, often grown in gardens and found in the wild in Europe, is also sometimes referred to as "valerian", but is a different species (Centranthus ruber) - so beware.

The roots of Valerian are used in pharmacology and herbal medicine, principally as an aid to insomnia, but I found a number of observations from people who use it that appear to show it is a general relaxant, good against stress and anxiety, and because stress can cause erectile dysfunction, useful in this area too.  Its name is derived from the Latin verb valere  - to be strong, healthy. 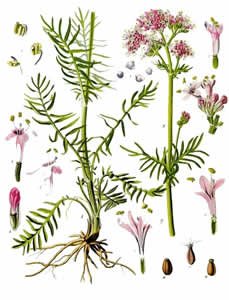 I could find no really reliable evidence of how Valerian works, but it has been used as a medicinal herb since at least the time of ancient Greece and Rome. Hippocrates described its properties, and Galen later prescribed it as a remedy for insomnia. In the sixteenth century the Anabaptist reformer Pilgram Marpeck prescribed valerian tea for a sick woman.  Valerian flower extracts were used as a perfume in the sixteenth century.

There have been some rather poor analyses done in the scientific community attempting to home in on how it works, but I perhaps should not be too harsh on the researchers as according to Dr Duke’s analyses the number of chemicals in the roots is extraordinary large.  It contains a very impressive array of minerals and vitamins [some of which I have highlighted in the chart below] and would actually make a very good food.  This is all I could find.

A study in 2005, in vitro (receptor material not specified in abstract), found valerian extract as well as valerenic acid to be 5-HT5A receptor (serotonin receptor) partial agonists. Part of the binding studies focused on the 5HT5A receptor, which is distributed in the suprachiasmatic nucleus. This is a tiny region of the brain, which is implicated in the sleep-wake cycle [Wikipedia]

The plant itself and its leaves contain very different chemicals, but I have included an observation from a lass who appeared to have been helped by the leaves too, which left me a bit dubious but pleased for her, as this is not a conventional use of the plant and could be quite risky if Lepidoptera like the plant.  Lepidoptera eat toxic vegetation [to which they are immune] in order to make themselves unpalatable to predators.  If you compare the plant chemicals in the table below you will see they are very different 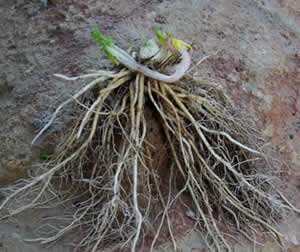 Fresh roots are the best source especially if you have grown them yourself and know they are free of pesticides and other harmful chemicals.  This recipe was on the Internet and came from a user, I have no idea whether it will work for others but it worked for him.

Warm half the milk until it is blood heat.  Chop the top and bottom from the fresh valerian root, and then add to the warm milk, along with the lemon balm, and orange. Liquidise and steep for at least half an hour.  Strain and press out all liquid.
Dissolve the dark chocolate in the remaining milk over a low heat.  Do not boil.  Leave to cool slightly, add vanilla extract and then add liquid from infusion. Drink at once

I found it odd that no one has yet supplied frozen Valerian, there is obviously a reason and it may be because the oils don't freeze or are expelled in the freezing process, but this would seem an approach closer to the plant itself with all its nutrients.

As most people do not have Valerian growing in their gardens, the next option is to use capsules containing extracts of the root or extracts sold in little vials.

The chief constituent of valerian is a yellowish-green to brownish-yellow oil which is present in the dried root, varying from 0.5 to 2.0 percent, though an average yield rarely exceeds 0.8 percent. This variation in quantity is partly explained by location; a dry, stony soil yields a root richer in oil than one that is moist and fertile.

The volatile oils that form the active ingredient are 'extremely pungent', which is why Valerian extract often comes in capsules.
"Though some people remain partial to the earthy scent, some may find it to be unpleasant, comparing the odour to that of unwashed feet".

If the oil itself is used, it can be drunk mixed with water, but Valerian tea should  be prepared only with luke warm water and NOT with boiling water, as this may drive off the lighter oils.  Most of the observations describe the use of Valerian in milk or other flavoured liquids that mask the taste.

How much is needed?  To understand the problems here we need to go back to basics. 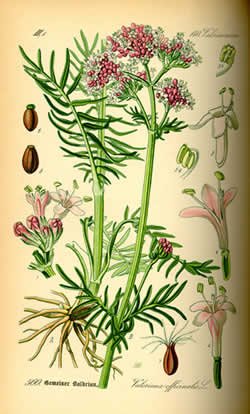 The papers on Pubmed about Valerian make rather fascinating reading.  There is a total divide between researchers who conclude that Valerian is safe but “not clinically efficacious for insomnia” and others like the systematic review and meta-analysis published in 2006 in the American Journal of Medicine which concluded that, "The available evidence suggests that valerian might improve sleep quality without producing side effects."

One of the problems appears to be the method of extraction of the oils [in other words the manufacturing process which is unregulated in most countries] and the plant source.  Plants grown intensively in poor soils appear to have little effect, whereas organically grown plants produced in small quantities are effective.  Dose becomes a little meaningless as a consequence, as some extracts are full of the necessary chemicals whereas others contain practically nothing.  And have little effect.

Overdosing could thus be a problem if you find a good source, meaning that initial doses should be low.  For the same reason Valerian should not be used if you are pregnant.

Because the compounds in valerian activate the parasympathetic nervous system, they should never be used with alcohol, benzodiazepines, barbiturates, opiates, kava, or antihistamine drugs.  This said I have found some interesting observations that show that people have [successfully] used Valerian in combination to try to combat addiction to  the pharmaceuticals in this list.

Moreover, non-pregnant adult human hepatotoxicity has been associated with short-term use (i.e., a few days to several months) of herbal preparations containing Valerian and Scutellaria (commonly called skullcap).  There is also lng term addiction potential “Withdrawal after long-term use in a male has also been associated with benzodiazepine-like withdrawal symptoms, resulting in cardiac complications and delirium.”  This is a medicine for infequent use.

I don't know and neither do researchers.

It works as a medicine.

The manufacturing and growing process is unregulated and not monitored and as a consequence  open to bad practise.

Better to grow your own.