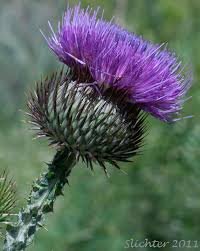 Onopordum acanthium (Cotton thistle, Scotch thistle), is a flowering plant in the family Asteraceae. It is native to Europe and Western Asia from the Iberian Peninsula east to Kazakhstan, and north to central Scandinavia, and widely naturalised elsewhere. It is a vigorous biennial plant with coarse, spiny leaves and conspicuous spiny-winged stems. There are three subspecies:

In agriculture it is considered a noxious weed, but the stems of the Thistle are edible like Burdock and the seed receptacle is also edible resembling a very delicate artichoke heart.  The seeds can also be crushed to produce oil, which at one time was used for lamps.  Furthermore it can indeed be eaten by livestock.

There is an irony about the spread of this thistle because nutritionally it is excellent food for animals.

When beaten up or crushed in a mill to destroy the prickles, the leaves of all Thistles have proved excellent food for cattle and horses. This kind of fodder was formerly used to a great extent in Scotland before the introduction of special green crops for the purpose.

It also has a number of medicinal properties which have long since been forgotten. 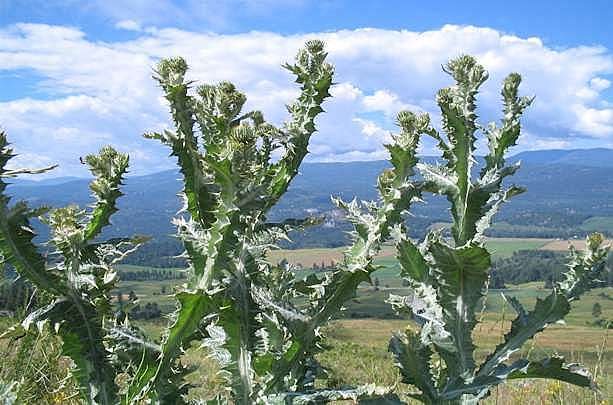 Scotch thistle is a biennial plant, producing a large rosette of spiny leaves the first year. The plants typically germinate in the autumn after the first rains and exist as rosettes throughout the first year, forming a stout, fleshy taproot that may extend down 30 cm or more for a food reserve.

In the second year, the plant grows (0.2–) 0.5–2.5 (–3) m tall and a width of 1.5 m. The leaves are 10–50 cm wide, are alternate and spiny, often covered with white woolly hairs and with the lower surface more densely covered than the upper. The leaves are deeply lobed with long, stiff spines along the margins. Fine hairs give the plant a greyish appearance. The massive main stem may be 10 cm wide at the base, and is branched in the upper part. Each stem shows a vertical row of broad, spiny wings (conspicuous ribbon-like leafy material), typically 2–3 cm wide, extending to the base of the flower head. 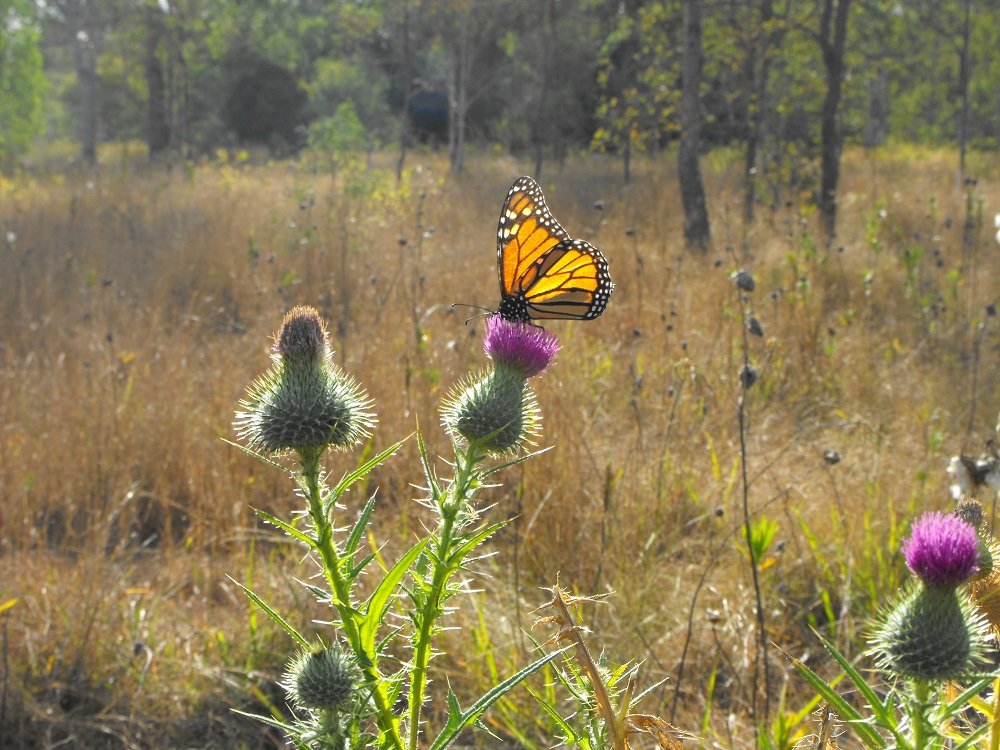 The flowers are globe shaped, 2–6 cm in diameter, from dark pink to lavender, and are produced in the summer. The flower buds form first at the tip of the stem and later at the tip of the axillary branches. They appear singly or in groups of two or three on branch tips. The plants are androgynous, with both pistil and stamens, and sit above numerous, long, stiff, spine-tipped bracts, all pointing outwards, the lower ones wider apart and pointing downwards. After flowering, the ovary starts swelling and forms about 8,400 to 40,000 seeds per plant.

Most seeds germinate in autumn after the first rains, but some seeds can germinate year round under favourable moisture and temperature conditions. Seeds that germinate in late autumn become biennials. But when they germinate earlier, they can behave as annuals. Buried seed can remain viable in the soil for at least seven years and possibly for up to twenty years or more. Mainly locally dispersed by wind, or more widely by humans, birds, wildlife, livestock or streams, the seeds are sensitive to light and only germinate when close to the surface. Seedlings will emerge from soil depths up to 4.5 cm, with 0.5 cm being optimal. 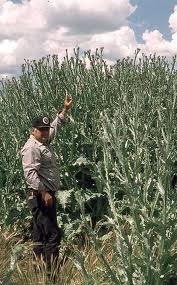 In the late 19th century, this thistle was introduced to temperate regions of North America, South America, and Australia as an ornamental plant, and is now considered a major agricultural and wildland noxious weed. It spread rapidly. In the USA, it was first found in Utah in 1963. By 1981, it covered approximately 6070 hectares in 17 counties. Eight years later, it had spread to cover more than 22,540 hectares in 22 counties. Known infestations include most of the Pacific Northwest along with Utah, Colorado, New Mexico, Wyoming, Nebraska, and South Dakota. On western rangeland, infestations directly result in significant economic losses for ranchers. It is also widespread in Australia and New Zealand. In Australia it commonly hybridises with the related invasive Onopordum Illyricum.

It has now been recorded from nearly 50 countries. It is difficult to eradicate because of its drought resistance. It can spread rapidly and eventually dense stands prohibit foraging by livestock. Infestations of Cotton thistle often start in disturbed areas such as roadways, campsites, burned areas, and ditch banks. The weed adapts best to areas along rivers and streams, but can be a serious problem in pastures, grain fields and range areas. A single plant is imposing enough, but an entire colony can ruin a pasture or destroy a park or campsite, sometimes forming tall, dense, impenetrable stands. Besides creating an impenetrable barrier to humans and animals, the plant nearly eliminates forage use by livestock and some mammal species such as deer and elk.

The plant is similarly regarded in many parts of Europe, here is Mrs Grieve writing at the turn of the last century:

In agriculture the Thistle is the recognized sign of untidiness and neglect, being found not so much in barren ground, as in good ground not properly cared for. It has always been a plant of ill repute among us; Shakespeare classes 'rough Thistles' with 'hateful Docks,' and further back in the history of our race we read of the Thistle representing part of the primeval curse on the earth in general, and on man in particular, for - 'Thorns also and Thistles shall it bring forth to thee.' ……………..Thistles will soon monopolize a large extent of country to the extinction of other plants, as they have done in parts of the American prairies, in Canada and British Columbia, and as they did in Australia.  …..The growth of weeds in Great Britain, having, in the opinion of many, also reached disturbing proportions, it is now proposed to enact a similar law in this country, and the Smallholders' Union is bringing forward a 'Bill to prevent the spread of noxious weeds in England and Wales,' the provisions being similar to the Australian law - weed-infested roadsides, as well as badly-cleared cultivated land, to come within the scope of the enactment.

The Bill was indeed passed, but it is no longer enforced.  And not because the threat has gone away. 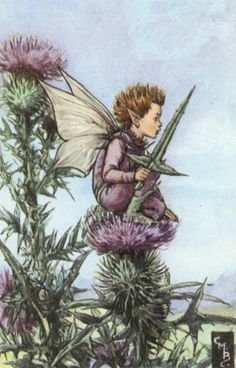 The Thistle is a symbolic plant, especially in its native Scotland, follow the link for more details.

Unfortunately I could find no entry on Dr Duke, so I cannot list the nutrients.

This plant has been very poorly researched given the known medical efficacy of some of its relatives.  There are few properly researched papers and even fewer properly conducted trials.  One can only assume that because it is a prolific weed, no pharmaceutical company can be bothered to finance any research, which of course is somewhat tragic.

The reason it is on the site, however, is to encourage research, because according to ‘The Ancients’ this Thistle is said to be a specific cure for ‘cancerous complaints’, and again according to Mrs Grieve “in more modern times the juice is said to have been applied with good effect to cancers and ulcers”.   The implication here is that it may well be anti-bacterial, antiviral, anti-fungal and anti-parasitic like the other thistles.

It appears to have once also been a cure for rickets.  Rickets is defective mineralization or calcification of bones due to deficiency or impaired metabolism of vitamin D, phosphorus and calcium, and is still among the most frequent childhood diseases in many developing countries. The predominant cause is a vitamin D deficiency, but lack of adequate calcium in the diet may also exacerbate the problem.  Without any analysis it is impossible to know why this plant helps - it may be one of the few sources of Vitamin D outside of fish, eggs and animal fats and thus a key food for vegetarians or vegans.  The alternative is that it is a source of calcium or phosphorus.

Gerard tells us, on the authority of Dioscorides and Plinv, that 'the leaves and root hereof are a remedy for those that have their bodies drawn backwards,' and Culpepper explains that not only is the juice therefore good for a crick in the neck, but also as a remedy for rickets in children. It was considered also to be good in nervous complaints – often caused by mineral imbalance.

Given that the seeds may also have medicinal properties it is worth adding that the oil obtained from the seeds has been used on the Continent for burning, both in lamps and for ordinary culinary purposes. Twelve pounds of the seeds are said to produce, when heat is used in expression, about 3 lb of oil. 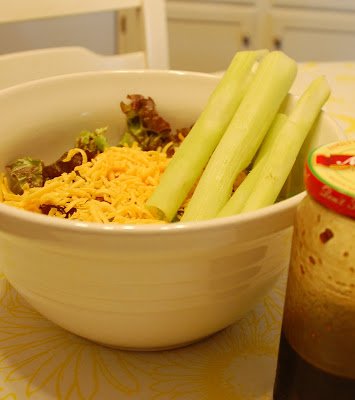 You can eat them plain, with salt and pepper, with vinegar,
with peanut butter, or in a salad!

The juicy receptacle or disk on which the florets are placed was used in earlier times as the Artichoke - which is also a member of the Thistle tribe.

The young stalks, when stripped of their rind, may be eaten raw in salads or cooked like those of the Burdock.

Another use if you like making your own cheese is to dry the fluff part of the flower head you normally throw away and use it as a source for your rennet coagulant.

All those who like foraging and using wild foods have taken thistle to their heart, and there are numerous very good videos on youtube showing how they are prepared and how they can be eaten, although less about their medicinal value, simply because it is not definitively known.  And here are some examples: