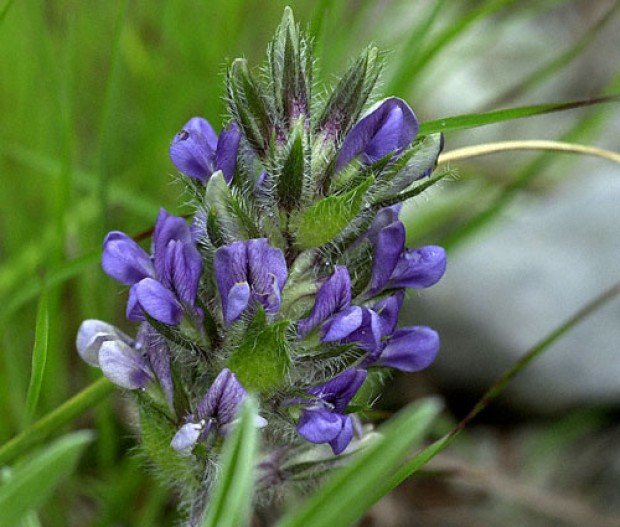 It bears a starchy tuberous root edible as a root vegetable.  We could thus have placed it in the food section, however, it is widely used these days as a medicine, as such we have plavced the plant here, in the medicines section.

The Lakota name for the plant is Timpsula. The name of Topeka, the capital city of Kansas, is believed to mean a "good place to dig prairie turnips" in the Kansa and other southern Siouan languages.

The plant is also known as Pediomelum esculentum.

English names for the plant include tipsin, teepsenee, breadroot, breadroot scurf pea, large Indian breadroot and pomme blanche. The prairie turnip was a staple food of the Plains Indians and the early settlers. 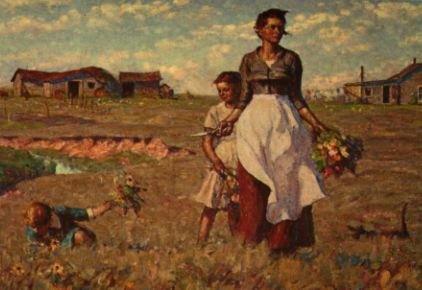 The prairie turnip has a range on the Great Plains from Manitoba south to Texas and from Wisconsin west to Montana. It grows best in full sun on well-drained and rocky or sandy soil. The plant is most commonly found on undisturbed prairie. The relative scarcity of the plant today compared to its previous abundance may be because most prairie has been converted to farmland or managed grassland. 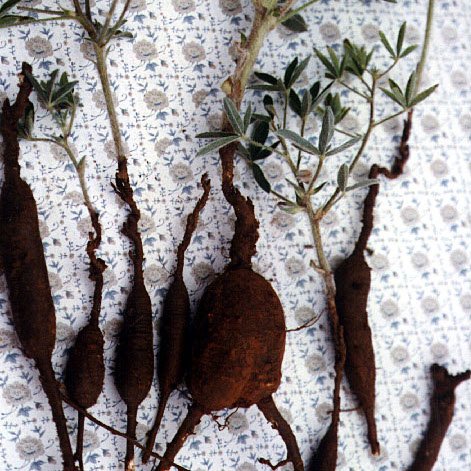 The prairie turnip is a perennial, living 3 to more than 6 years. In spring, several densely haired stems emerge from the ground and reach up to 30 cm (12 in), bearing palmately compound leaves divided into five leaflets.

In early summer the plant produces abundant blue or purple flowers in terminal clusters 5 to 10 cm (4 in) long, leading to flattened, slender-tipped pods.

Harvest of the tubers is during flowering. The flowers and flower stalk break off and disappear soon after flowering, making the plant difficult to locate. The plant grows from one or more sturdy brown roots which form rounded, spindle-shaped tubers about 7 to 10 cm (4 in) below the surface, each 4 to 10 cm (4 in) long.

The prairie turnip takes 2 to 4 years to grow from seed to mature root. The long period required for maturation probably limited the success of any efforts the Indians made to cultivate the plant. Garden plantings have been made by scientists to evaluate the potential for domestication. 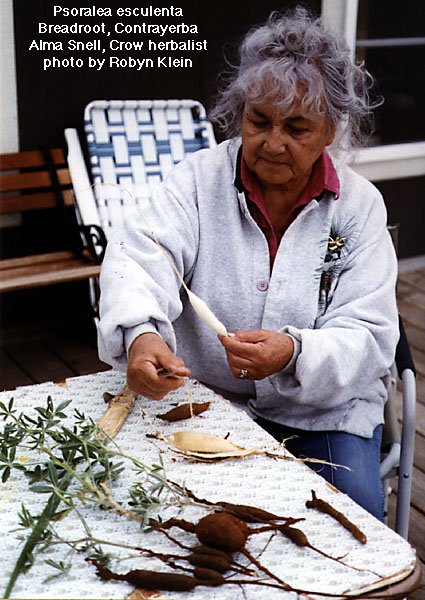 Abundant under favourable conditions, palatable, and nutritious, the prairie turnip was once a wild-gathered staple food of the Plains Indians, especially the nomads, and of early European explorers. It was harvested May through July when the blooming flower stalks were easily visible among prairie grasses. The Indians, usually women, harvested the root with a sharpened, fire-hardened digging stick. The tubers have a hard, dark skin and are peeled before eating. Some were eaten immediately, either raw or boiled, but most were dried for further use. They were sliced and sun dried, braided and hung on meat racks to dry, and pounded into flour.

The prairie turnip was also a reliable food in times of shortage or famine. A number of examples have been recorded of Indians and whites subsisting on the root for extended periods when other food could not be obtained. The prairie turnip is more nutritious than most root crops, containing about 7 percent protein, more than 50 percent carbohydrates, and is rich in vitamins and trace minerals. Particularly important was the Vitamin C content of 17.1 milligrams per 100 grams as the winter meat-rich diet of the Plains Indians was often deficient in Vitamin C.

…..they eat it uncooked, or they boil it, or roast it in the embers, or dry it, and crush it to powder and make soup of it. Large quantities are stored in buffalo skin bags for winter use. A sort of pudding made of the flour of the roots and the maseskatomina (saskatoon) berry is very palatable and a favorite dish. 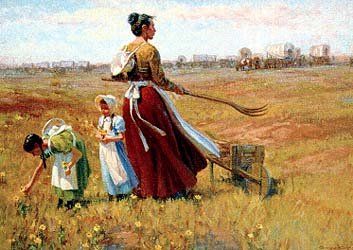