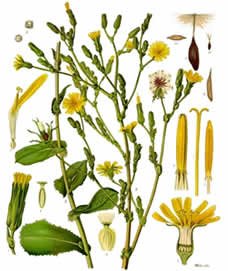 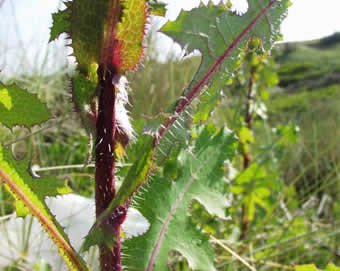 The correct chemical name for lettuce opium is lactucarium.   Lactucarium is a milky fluid secreted by several species of lettuce,  usually from the stems. When this fluid has been dried it is known as Lactucarium.

Quite a number of plants in the lettuce family contain Lactucarium but because each variety of lettuce is different and contain many other chemicals, you can’t just milk a lettuce and hope for a high.

"Lettuce Opium" was used by the Ancient Egyptians. The Egyptian god of fertility, Min, is closely tied to the plant and he is often depicted holding a rosette of Lactuca Serriola.

Wild Lettuce was also used by the Romans. Augustus was said to have raised a statue in honour of the Lettuce infusion that he claimed saved his life. The Roman naturalist Gaius Plinius Secundus (23 AD - 79 AD) , better known as Pliny the Elder wrote extensively of Lactuca in his work Naturalis Historia.  In mythology, Aphrodite is said to have laid Adonis in a lettuce bed.

Lettuce opium was often used by North American Indians who smoked the dried resin or sap obtained from the plant.  They cut the flower heads off, gathered the sap that drained and then let it air dry.  This process was repeated over a 2 week period by cutting just a little bit off the top each time.

The drug was prescribed and studied extensively in Poland during the nineteenth century.  Information contained in Polish medical studies of the 19th century show that Lactuca virosa and Lactuca sativa v. Lactuca hortensis, were used as a medicinal plant. In that period, lettuce and lactucarium, were considered to be an intoxicant, and were used as a sedative and an analgesic. The action of the substance was considered weaker than that of opium but free of the side-effects, and medical practice showed that in some cases lactucarium produced better curative effects than opium.

Lettuce opium  was introduced as a drug in the United States around 1799.  It was used principally as a medicine for coughs, as a sleeping aid and as a sedative and was prepared as a tincture or syrup or in lozenges.

Commercial preparations of lactucarium started to be produced, but after a time they were declared ‘without effect’.  Another study of the time identified that the active bitter principles lactucin and lactucopicrin from the fresh latex were unstable and were not found in commercial preparations of lactucarium. And so the substance was abandoned for medical use by commercial companies.  It continued to be used, however, until the 1940s. 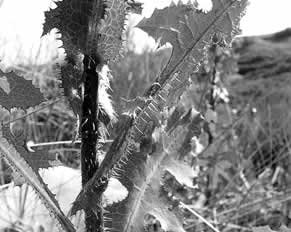 From this you can see that lactucarium is not like opium.  It has to be collected differently and not exposed to light otherwise it changes its chemical composition.  And its effects are not like opium.  We shall see why shortly.

In order to describe the effects of lettuce and lactucarium I will use one plant from which it is extracted as an example.   Lactuca virosa variously contains [according to multiple sources]

Lactucarium is then said to contain

Clearly lactucarium may well also include some of the other compounds depending on how it was extracted.  It was noted very early in research that commercial lactucarium does not contain hyoscamine, but many of the simple samples prepared in folk medicine did.  So we should add this to the list.

As the scientists said “Some effects have also been credited to a trace of hyoscyamine in Lactuca virosa, but the alkaloid was undetectable in standard lactucarium”

The standard definition of lactucarium in older medical text books required its production from Lactuca virosa, but it was recognized that lettuce-opium obtained from Lactuca serriola or Lactuca quercina was of superior quality.

Quote “The whole plant is rich in a milky sap that flows freely from any wounds. This hardens and dries when in contact with the air. The sap contains "lactucarium", which is used in medicine for its anodyne, antispasmodic, digestive, diuretic, hypnotic, narcotic and sedative properties”.

The plants containing lactucarium are listed below

The presence of the chemicals shown above has not passed the medical fraternity by and these plants are being investigated, for more details see

Acetylcholinesterase inhibitors from plants - Mukherjee PK, Kumar V, Mal M, Houghton PJ. - Department of Pharmacy, Pharmacognosy Research Laboratories, Franklin-Wilkins Building, King's College London, 150 Stamford Street, London SE1 9NH, UK.
Inhibition of acetylcholinesterase (AChE), the key enzyme in the breakdown of acetylcholine, is considered as a promising strategy for the treatment of neurological disorders such as Alzheimer's disease, senile dementia, ataxia and myasthenia gravis. A potential source of AChE inhibitors is certainly provided by the abundance of plants in nature. This article aims to provide a comprehensive literature survey of plants that have been tested for AChE inhibitory activity. Numerous phytoconstituents and promising plant species as AChE inhibitors are being reported in this communication.
PMID: 17346955

If true, it makes lettuce and chicory  very interesting plants.

I initially started to provide quite a detailed list of all the methods I had found for extraction and use, but this plant needs to be treated with respect.  It is not for me to act like a doctor, so no method I am afraid.

Eating lettuce and chicory does you no harm - eat the stem as well.

Use it to promote relaxation and lucid dreaming, via relaxation you get your effects.

It is legal, the plants actually grow wild so they are also free.  They are prolific and numerous and occur in a large number of countries.

You don’t need anything else at all in this context.

it needs to be used with extreme caution only by those who know what they are doing.

We don’t yet know the true nature of these plants or the subtleties of the constituents especially since they appear to exhibit different properties at different stages of plant development.

Analgesic and sedative activites of Lactucin and some Lactucin like guaianolidoles in mice  - A. Weso?owska A. Nikiforuka  K. Michalska, W. Kisiel and E. Chojnacka-Wójcik;  Department of New Drugs Research and Department of Phytochemistry, Institute of Pharmacology, Polish Academy of Sciences, Krakow, Poland

At the last count there were 24 observations for this preparation on EROWID.  I will not repeat them here for examples see

It is clear that a large number of people think it is an opium substitute and that it produces an opium like effect.  And as a consequence they are either sorely diappointed or ill as they overdose on it.