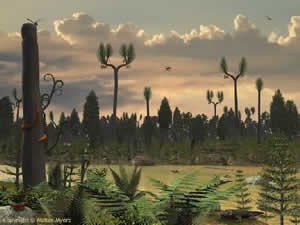 Equisetum (horsetail, snake grass, puzzlegrass) is the only living genus in Equisetaceae, a family of plants that reproduce by spores rather than seeds.  It is a "living fossil" as it is the only living genus of the entire class Equisetopsida, which for over one hundred million years was much more diverse and dominated the understory of late Paleozoic forests. Some Equisetopsida were large trees reaching to 30 meters tall.

A superficially similar but entirely unrelated flowering plant genus, mare's tail (Hippuris), is occasionally misidentified as "horsetail".  As mare’s tail is an absolute pest in vegetable gardens, it is somewhat sad that the two are unrelated.

Equisetum is used as both a food and a medicine, as such it was somewhat difficult to know where to put the plant.  It is apparently quite tasty, as such it could have gone under the heading of food.  But its medical uses are quite interesting so I have placed the plant here. 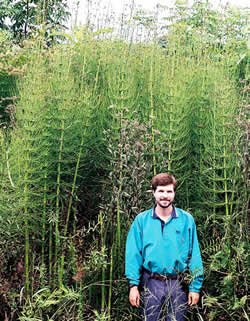 The genus Equisetum is near-cosmopolitan, being absent only from Antarctica, though they are not known to be native to Australia, New Zealand nor the islands of the Pacific. They are perennial plants, either herbaceous and dying back in winter as most temperate species, or evergreen as most tropical. They typically grow 0.2-1.5 m tall, though the "giant horsetails" are recorded to grow as high as 8 m or more (Mexican giant horsetail, E. myriochaetum).  What is a little ironic is that the field horsetail (E. arvense) is looked on as a nuisance weed, as it readily regrows from the rhizome after being pulled out. Members of the genus have even been declared noxious weeds in Australia and in the US state of Oregon.  And all the Equisetum are classed as "unwanted organisms" in New Zealand and are listed on the National Pest Plant Accord.

One of the intriguing things about horsetail is that it contains not only a rich supply of vitamins and minerals but it also contains Nicotine.  Now you may regard this as rather suspect, but Nicotine is actually a relaxant working in much the same way as Acetylcholine.  And because it acts on the same receptors, it also has the ability to produce pain relief without the addictive effects of such drugs as codeine.  It is, according to Dr Duke's database the only plant besides the tobacco family that contains Nicotine and you can't eat tobacco, but you can eat Horsetail.  The following table shows its exact constituents

As you can see the plant has a role in helping combat mineral and vitamin deficiency, but the plants also have a high content of thiaminase, which may also help with oedema.  Horsetail is mentioned in the fifth edition of the national pharmacopoeia of Argentina and Equisetum giganteum is widely used in South America as a diuretic to reduce swelling caused by excess fluid retention and for urinary infections, bladder and kidney disorders.

The Nicotine, by acting as a relaxant also has diuretic effects because it acts on the Parasympathetic nervous system.

As long as you do not overdose by taking concentrated extracts instead of simply enjoying the plant as a food, the following effects may be obtained from the Nicotine content:

Horsetail contains silicon and has been investigated as a help for those suffering from  bone disorders........

Heinerman’s Encyclopedia of Healing Herbs and Spices
No other herb in the entire plant kingdom is so rich in silicon as is horsetail. This trace element really helps to find protein molecules together in the blood vessels and connective tissues. Silicon is the material of which collagen is made. Collagen is the “body glue” that holds our skin and muscle tissues together. Silicon also promotes the growth and stability of the skeletal structure.
A few European clinical studies have determined that fractured bones heal much more quickly when horsetail is taken. The incidence of osteoporosis is, likewise, more greatly reduced when some horsetail is added to the diet. A few folk healers I’m aware of have recommended this herb to athletes who’ve suffered sprains, dislocated joints, pulled hamstrings or torn ligaments. 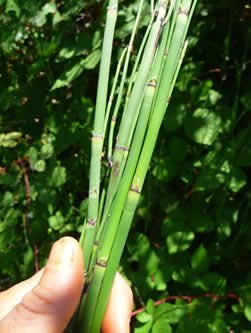 If eaten over a long enough period of time, some species of horsetail can be poisonous to grazing animals, including horses.

But people have regularly consumed horsetails.  You need to choose a plant that has not been growing in an area polluted with heavy metals or toxins as Horsetails are extraordinarily good at removing heavy metals and toxins from soil.  Most of the pollutants remain in the roots, but the risk of plant contamination is high.  Horsetails were once used to find gold as they could be analysed without the need for any prospecting - they are this good at absorption.  So beware.

The young plants are eaten cooked or raw, though they do need to be prepared properly. For example, the fertile stems bearing strobili of some species are cooked and eaten like asparagus, a dish called tsukushi in Japan. The people of ancient Rome would eat meadow horsetail in a similar manner, and they also used it to make tea. Indians of the North American Pacific Northwest eat the young shoots of this plant raw.

DO NOT TAKE EXTRACTS OR SUPPLEMENTS you could suffer all the effects of overdose. And use the plant as a medicine.  The following is a sad but cautionary warning

We describe the pediatric environmental history of a three-year-old Caucasian girl with an autism spectrum disorder. We utilized her pediatric environmental history to evaluate constitutional, genetic, and environmental factors pertinent to manifestation of neurodevelopment disorders. Both parents reported prenatal exposure to several risk factors of interest. A year prior to conception the mother began a weight loss diet and ingested 1200 mg/day [sic!] of 'horsetail' (Equisetum arvense) herbal remedies containing thiaminase, an enzyme that with long-term use can lead to vitamin deficiency. The mother reported a significant weight loss during the pregnancy and a deficiency of B-complex vitamins. Thiamine (vitamin B1) deficiency could have been potentiated by the horsetail's thiaminase activity and ethanol exposure during pregnancy. No other risk factors were identified.  PMID:  21453474

The following are not my recipes they come from a natural healer.

Strobil (the fertile shoots in spring) – cooked and used as an asparagus substitute. They should be used when young but even so it is probably best to change the water, when cooking save the water to use as a spray on your roses if they have black spots, or as a liquid feed for your garden. The leaf sheaths can be peeled off and the stems eaten raw – they are said to be “nothing but juice”.

Remembering that the plant has a diuretic effect, the reason for the change of water then becomes clear, you change the water as often as you need to tone down the effect.  But loss of minerals and vitamins from water change is inevitable so try to maintain a balance.  And

Horsetail tea
Pour eight ounces of boiling water over 4 level tsp. of fresh horsetail. Cover and steep for 3 minutes. A delicate person should drink no more than 1-1/2 cups a day, after meals, in divided doses 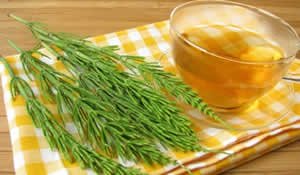