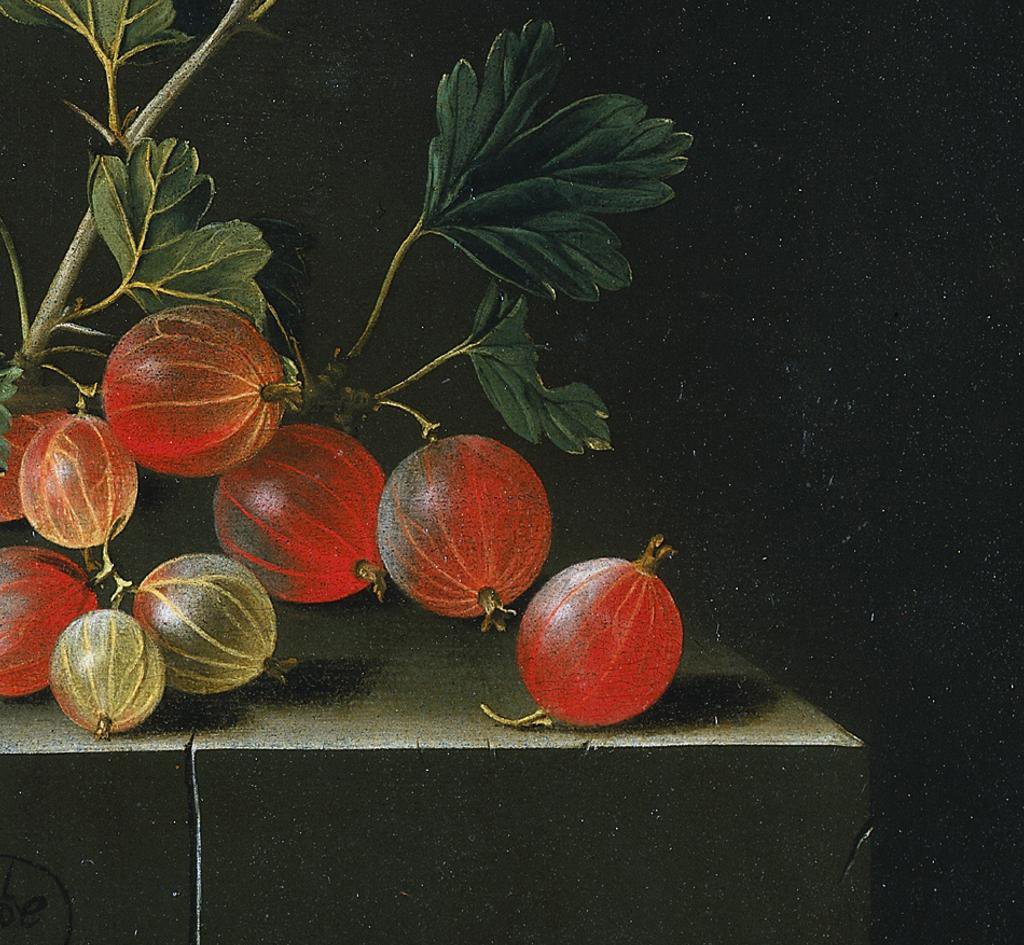 My father grew gooseberries.  He must have had about 10 bushes.  The fruit, even when ripe, were green and made you suck your cheeks in and squint a bit.  Your eyes tended to water too, even when they had sugar added.  My mother loved them like that, but then my Mum was a bit special.  My father even tried to make some home made wine from them, but that really did make your eyes water, I'm not sure 'dry' describes it adequately.  It was an acquired taste.

So, I have to say I did not have a great desire to plant gooseberry bushes when my husband and I acquired a house with a big garden.  But I was wrong, because there are some lovely sweet pink varieties of dessert gooseberries that taste heavenly, and gooseberries are healthy, versatile and very easy to grow.  What changed my mind was my first attempt at gooseberry ice cream, of which more in a moment. 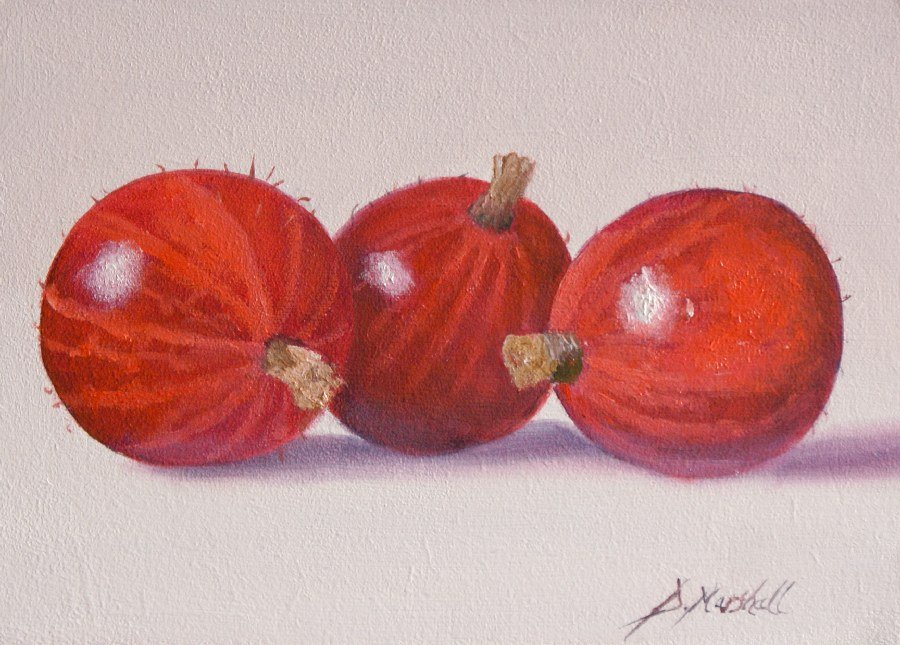 Ribes uva-crispa - L. is better known as the common or European gooseberry.  It belongs to the Grossulariaceae family.  The plant is a deciduous shrub growing to 1.2 m (4ft) by 1 m (3ft 3in) which has soft hairy leaves and fearsome prickles or 'spikes'.  It is extraordinarily hardy, surviving North of England winters buried completely in snow and being subjected to hard frosts.

The gooseberry is native to Europe, northwestern Africa, west, south and southeast Asia.  They grow gooseberries in Southern India in Kerala, which shows what a versatile plant it is. 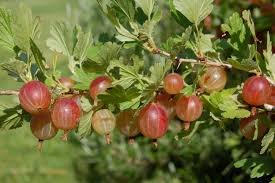 The fruit of wild gooseberries is smaller than in the cultivated varieties, but tasty; the fruit is generally hairy, but there are some smooth varieties; the berries' colour is usually green, but there are red (to purple), yellow, and white variants.

Baynes, T.S. (1879). The Encyclopaedia Britannica: A Dictionary of Arts, Sciences, and General Literature
Of the many hundred sorts enumerated in recent horticultural works, few perhaps equal in flavour some of the older denizens of the fruit-garden, such as the Old Rough Red and Hairy Amber. The climate of the British Isles seems peculiarly adapted to bring the gooseberry to perfection, and it may be grown successfully even in the most northern parts of Scotland; indeed, the flavour of the fruit is said to improve with increasing latitude. In Norway even, the bush flourishes in gardens on the west coast nearly up to the Arctic Circle, and it is found wild as far north as 63° 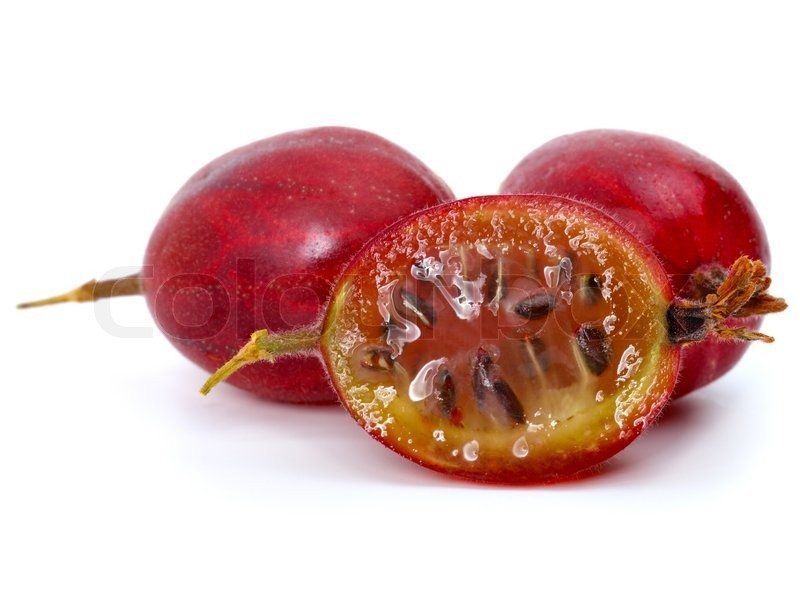 The European gooseberry is one of several similar species in the subgenus Grossularia; and in other related species, for example, the North American Gooseberry Ribes hirtellum, the fruit can be green or dark purple to black.  So in reality, there is nothing common about the common gooseberry. 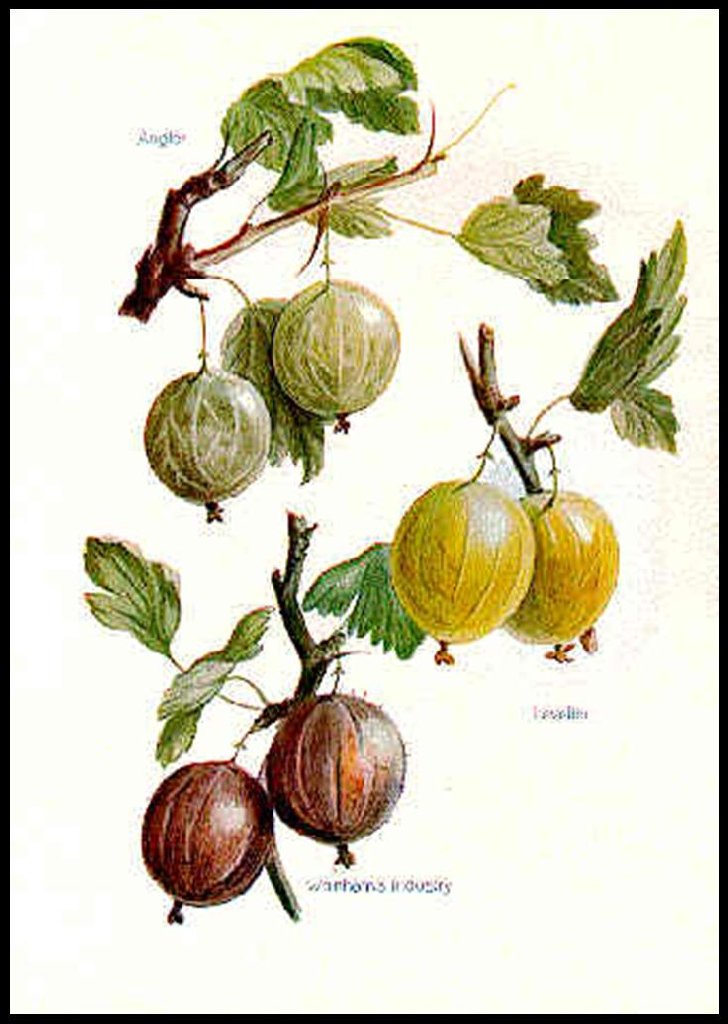 Overall the gooseberry is a tough little plant, but it does get attacked by mildew, if it is not looked after.  Fruit is produced on lateral spurs and on the previous year's shoots. It needs to be pruned.  The main aim is to let the light in and a subsidiary purpose is to allow picking without excessive scratching from the spines. "Heavy nitrogen composting must be avoided as too much nitrogen will produce extensive growth and weaken the bush. This will make the bush susceptible to mildew".

Gooseberry bushes are also vulnerable to magpie moth caterpillars,  the V-moth and the worst pest in our parts  - the Gooseberry sawfly (Nematus ribesii).  Nematus ribesii grubs bury themselves in the ground to pupate and on hatching into adult form, they lay their eggs, which soon hatch into larvae, on the underside of gooseberry leaves.   They can strip a plant of all its leaves, almost overnight.  Interestingly enough, the plants do survive, producing new leaves, but practically no fruit.

“Insecticides used in the 19th-century against these included tar water, weak solutions of carbolic acid, and powdered hellebore, which worked against magpie moths and V-moths as well as gooseberry sawflies. Foxglove and tobacco infusions were also sometimes used.” 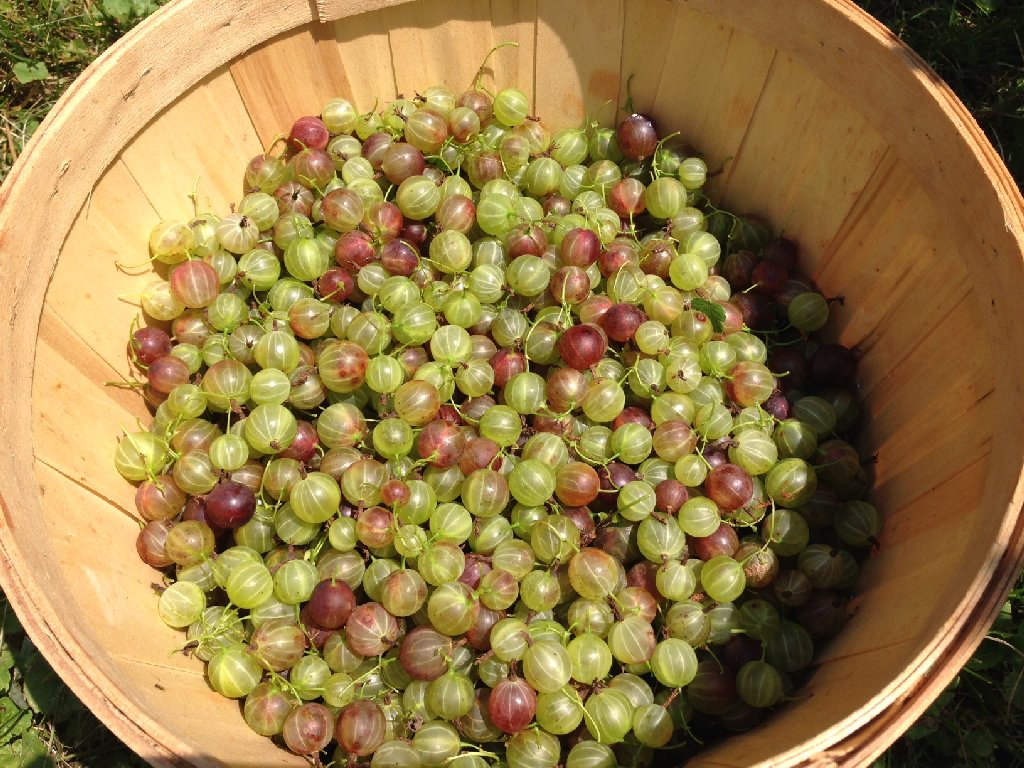 In theory if you dig around the plant every so often it digs up the sawfly, but in practise, you always miss some.

Plants are self-fertile and the flowers are hermaphrodite (have both male and female organs), so in theory you only need one.  If they survive the sawfly you get a good crop from one plant, as long as you feed it well.  The flowers are pollinated by insects.  The soil needs to be well drained, but moist during berry setting, and they seem to do best on acid soils, although on the whole they seem to do OK on most soils.  It can grow in semi-shade (light woodland) or no shade.

One of the strange things about the gooseberry is it appears to be underrated medicinally.  It is mentionned as a plant to help with constipation, but on the whole all its properties did not appear to be widely known, or maybe we just lost this knowledge.

Baynes, T.S. (1879). The Encyclopaedia Britannica: A Dictionary of Arts, Sciences, and General Literature 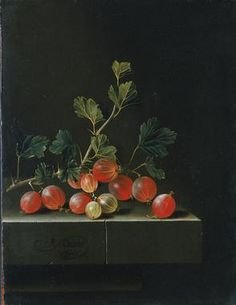 Although gooseberries are now abundant in Germany and France, it does not appear to have been much grown there in the Middle Ages, though the wild fruit was held in some esteem medicinally for the cooling properties of its acid juice in fevers; while the old English name, Fea-berry, still surviving in some provincial dialects, indicates that it was similarly valued in Britain, where it was planted in gardens at a comparatively early period. William Turner describes the gooseberry in his Herball, written about the middle of the 16th century.

The medicinal properties are described in the observations.

"Gooseberry bush" was 19th-century slang for pubic hair, and from this comes the saying that babies are "Born under a gooseberry bush".

So now you know. 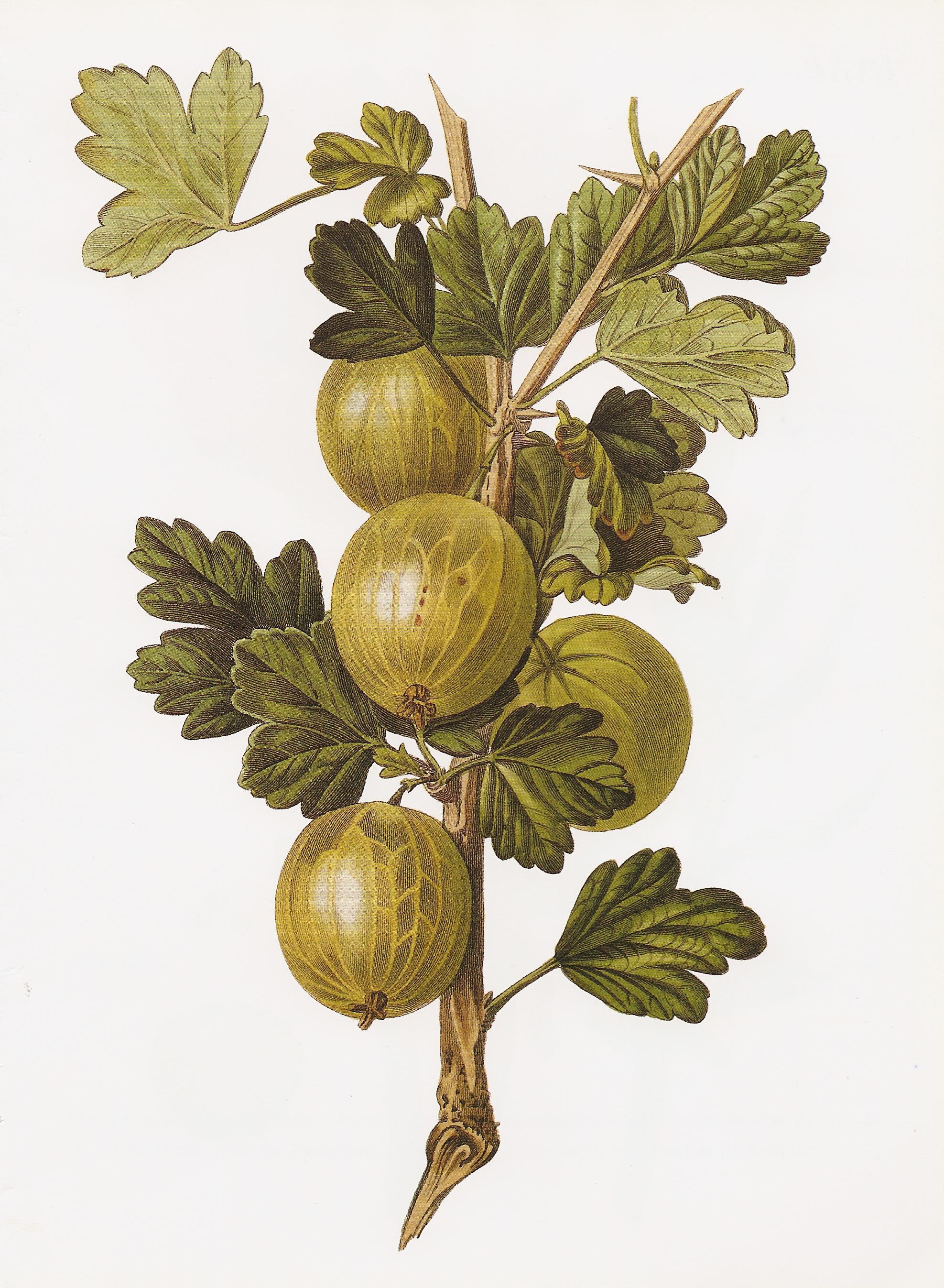 I have reproduced the table that occurs in Dr Duke's database in full, as there are indications that the leaves as well as the fruit may have interesting properties.

Essential amino acids  are not present in gooseberries.

which makes goseberries a very useful food.  The only mineral needed but not present was: Chloride.

Heavy metals for which our bodies have no use are shown in the table below in Red. These must have been present in the soil in which this sample was grown, which means the plant takes up heavy metals.   Note that in time, it may be found that some of these metals do have a use, feeding our intestinal eco-sysytem, but for the time being they are regarded as not needed and in some cases not wanted.   If we look at this in a positive way, the gooseberry is a natural chelating agent.  If we can find an organically grown source of gooseberries, from an area free of toxins, we have a healing agent.

Gooseberries can be made into a delicious chutney - both in the Keralan style and in the bog standard English style [gooseberries, cloves/allspice, sugar, malt vinegar]!

Or there is the staple of the North of England  - smoked, filleted and deboned mackerel/herring with gooseberry sauce. 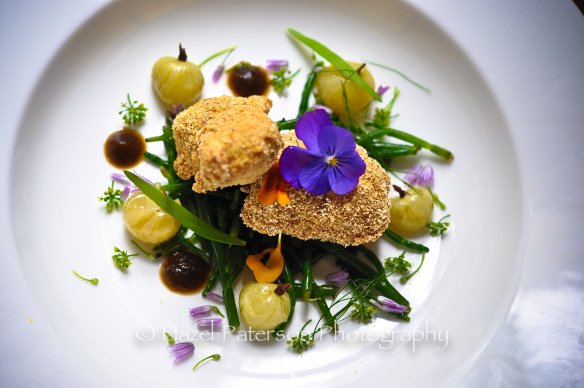 Or gooseberry salad - for the salad you must have pink dessert gooseberries as you eat them raw, to this you add rocket, new potatoes, and optionally beetroot or pecans.

You can make gooseberry jam.

And here are a few more unusual ideas on how to use gooseberries.  I have put more recipes in than normal to show you that it is a very versatile fruit and can be made into a host of interesting dishes. 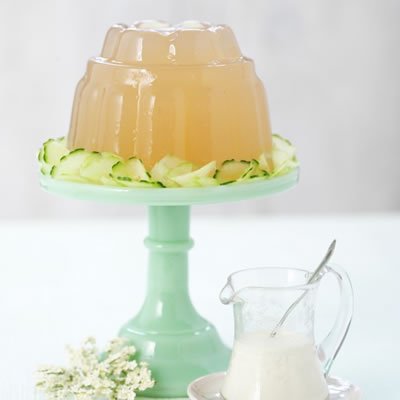 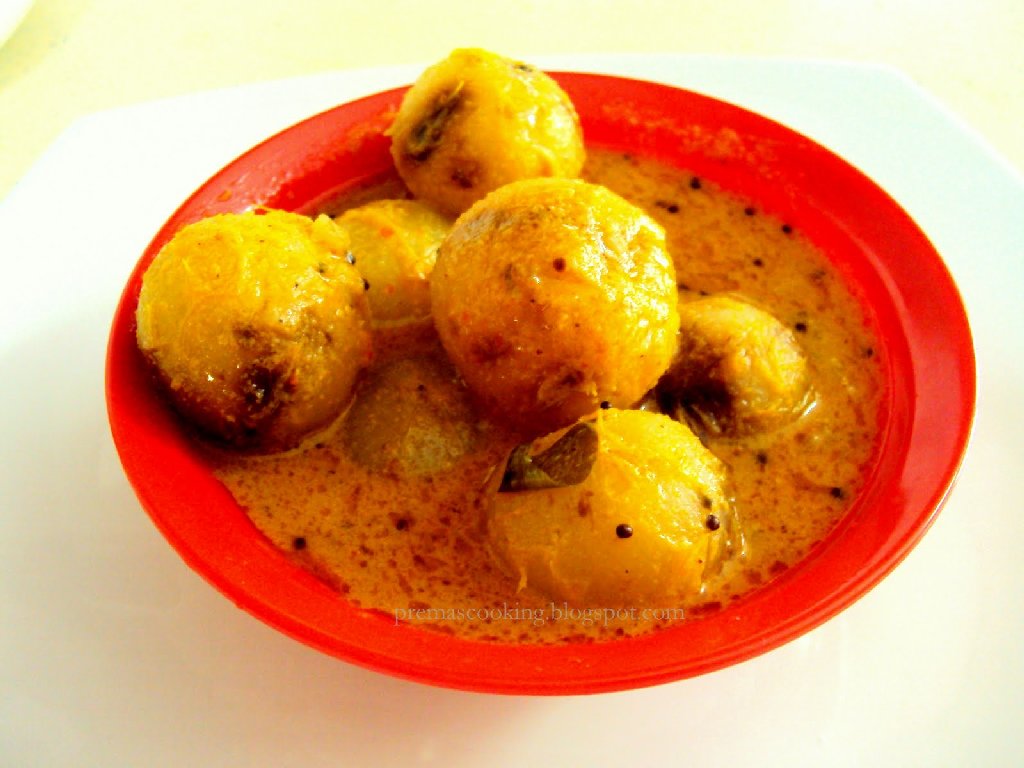 The addition of coconut cream to this dish makes it into a lovely dish to have with rice and 'wetter' curries.
Another curry recipe, very adaptable because you can add squashes, other sorts of vegetables, melons ,yams or more flavouring like shallots, garlic and ginger and as the Kerala lass who described this recipe says "make it even richer and yummier!"......... 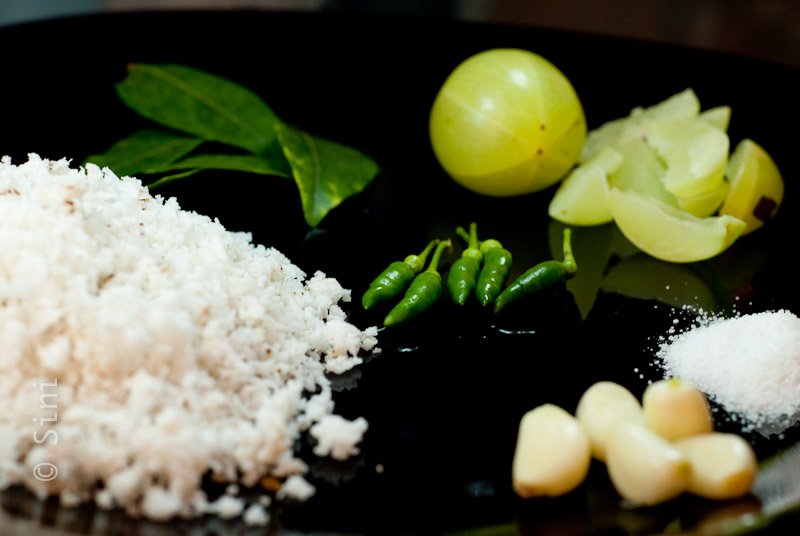 Now we move to dessert dishes and first of all the one that changed my mind over gooseberries.

Gooseberry ice cream - from Ices Galore by Rubenstein and Bush 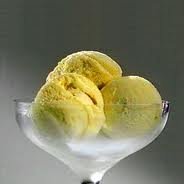 elderflowers can also be added
or cordial

Wash the gooseberries but do not bother to top and tail them.  Put them in a pan with the sugar and 2 or 3 tablespoons of water.  Simmer until very soft.  Pass through a nylon sieve and leave to cool.  Whip cream lightly, fold the cool puree into the cream.  Freeze.  If you do not have an ice cream maker, then take the ice cream out of the freezer as it sets and whisk well, returning it to the freezer.  Remove from freezer one hour before serving and leave in the refrigerator. 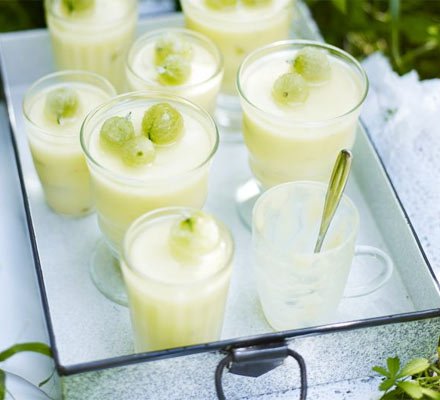 A similar recipe made with cream rather
than butter

Wash gooseberries, simmer gently in a pan with the sugar, when very soft sieve.  To sieved mixture add butter gradually, the egg yolks well beaten.  Leave to set in warm place.  Egg yolks must cook but not boil otherwise mixture will curdle.  Serve in small glass dishes.  If you have any very ripe dessert gooseberries the two go beautifully together.

Gooseberries go really well with elderflowers and are ripe round about the same time as elderflowers are out.  The alternative is to use organic good quality elderflower cordial.  This is more complicated, but very pretty 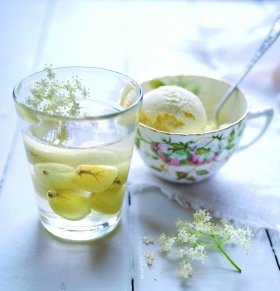 the jelly and the ice cream go well together

Put the gooseberries and sugar in a large pan. Pour over the elderflower cordial and sparkling elderflower. Heat gently for 10 minutes to dissolve the sugar, then poach the fruit gently for about 3-5 minutes until just soft but not falling apart. Lift them out with a slotted spoon and set aside. Sieve the liquid into a measuring jug and bring it up to the 600ml mark with more sparkling elderflower or water. Soak the appropriate number of gelatine leaves (follow packet instructions) in cold water for about 8 minutes, until floppy. Put a few tablespoons of the liquid in a small pan and heat. Squeeze the gelatine and add to the pan, then immediately remove it from the heat and swirl the liquid until the gelatine dissolves. Pour this back into the rest of the liquid with about 50 of the gooseberries. Place in the fridge to chill for 2 hours, until just setting (gelling). Pour into 6 glasses, taking care to push the gooseberries down into the jelly. (You may need to push them in every 20 minutes until they stay put.) Leave overnight to set completely.

The following recipe is old and I was told it was the precursor in the UK for HP sauce or brown sauce to go with chips [fries] and egg and bacon. 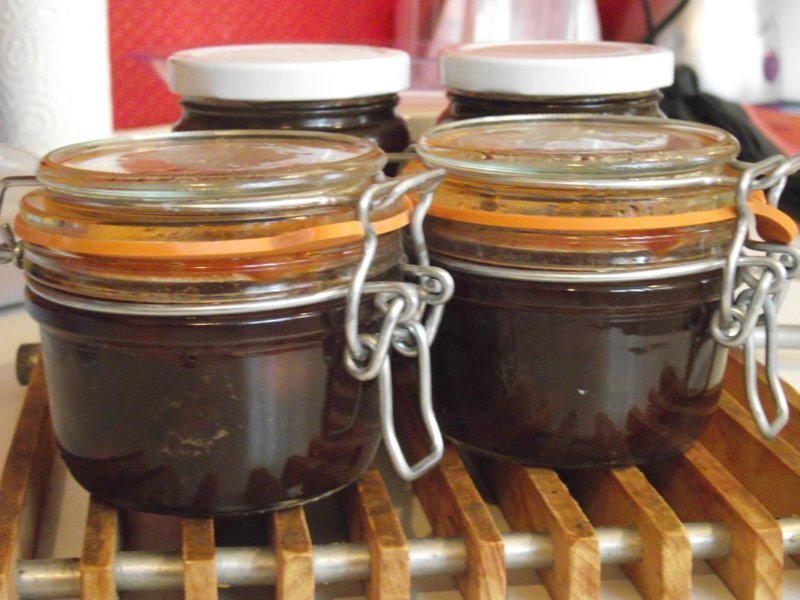 Put 2 quarts gooseberries in a pan with a little water, simmer until mushy then sieve.

Add 2 cups vinegar, 3 lbs brown sugar/molasses, and a dessertspoon each of ground cinnamon , cloves and allspice.

Put in bottles and seal down tightly.  A delightful adjunct to cold meats.