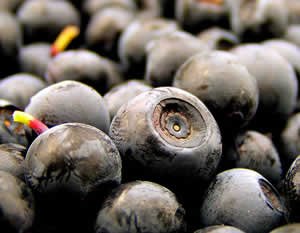 Bilberry is any of several species of low-growing shrubs in the genus Vaccinium (family Ericaceae), bearing edible berries. The species most often referred to is Vaccinium myrtillus L., but there are several other closely related species. Bilberries are distinct from blueberries but closely related to them.

Bilberry (especially Vaccinium myrtillus) is also known in English by other names including blaeberry , whortleberry, whinberry, winberry, windberry, wimberry, myrtle blueberry and fraughan. In several other European languages its name translates as "blueberry", and this may cause confusion with the related plants more usually known as "blueberry" in English, which are in the separate section Cyanococcus of the Vaccinium genus. In Europe including the British Isles the bilberry grows natively in the wild on acidic soils (whereas the blueberry is native to North America). It is very plentiful in the Peak district and Scotland. 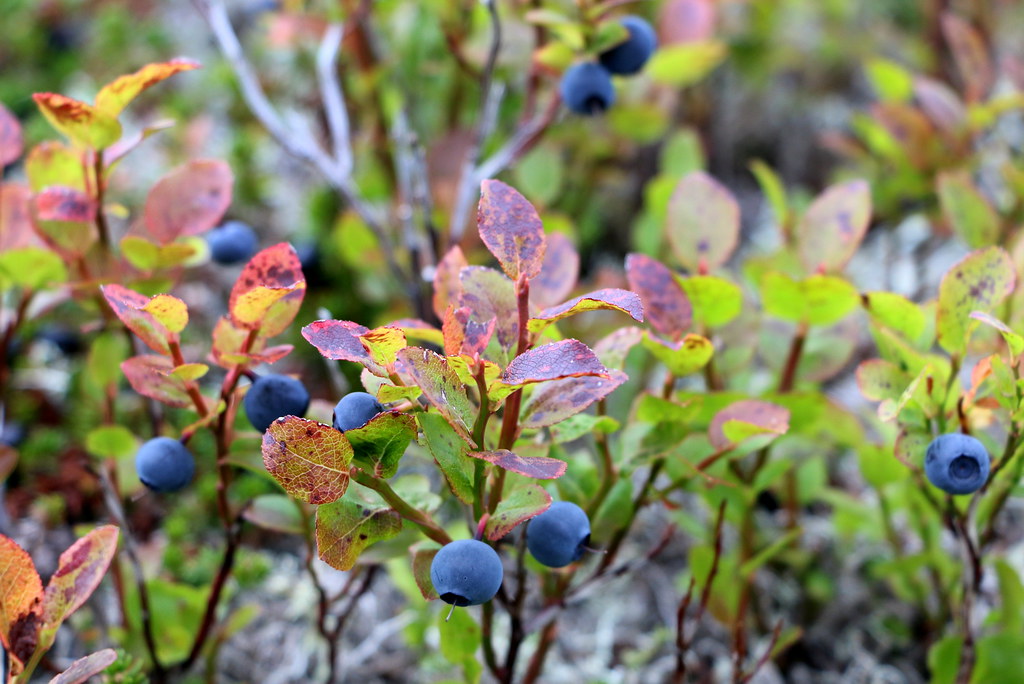 V. myrtillus grows abundantly in our heathy and mountainous districts, a small branched shrub, with wiry angular branches, rarely over a foot high, bearing globular wax-like flowers and black berries, which are covered when quite ripe with a delicate grey bloom, hence its name in Scotland, 'Blea-berry,' from an old North Countryword, 'blae,' meaning livid or bluish. The name Bilberry (by some old writers 'Bulberry') is derived from the Danish 'bollebar,' meaning dark berry. There is a variety with white fruits.

The leathery leaves (in form somewhat like those of the myrtle, hence its specific name) are at first rosy, then yellowish-green, and in autumn turn red and are very ornamental..

Bilberries flourish best on high grounds, being therefore more abundant in the north and west than in the south and east of England: they are absent from the low-lying Cambridgeshire and Suffolk, but on the Surrey hills, where they are called 'Hurts,' cover the ground for miles. 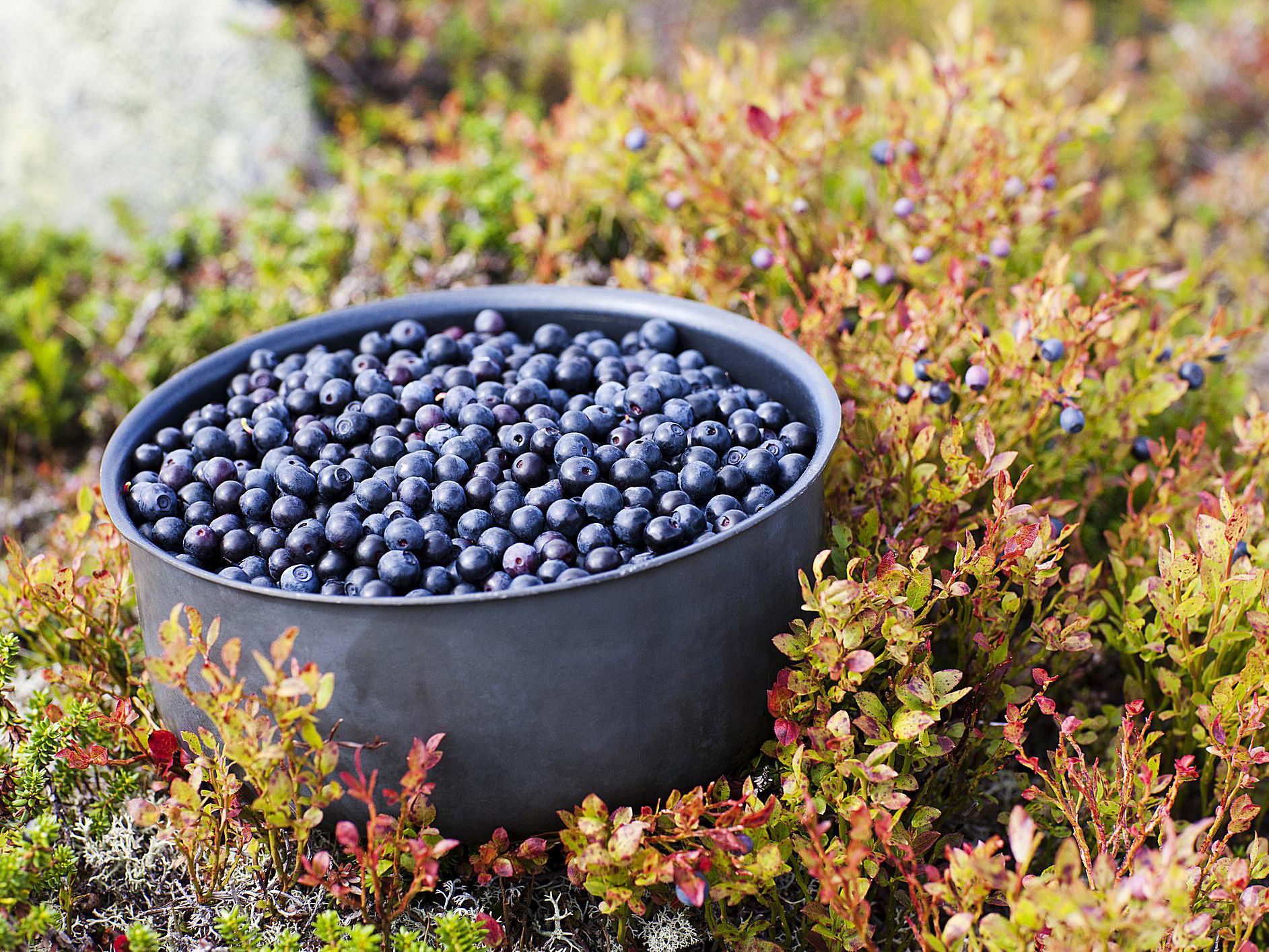 Bilberry juice yields a clear, dark-blue or purple dye that has been much used in the dyeing of wool;  and the picking of berries for this purpose, as well as for food, used to constitute a summer industry in the 'Hurts' districts. Owing to the shortage of the aniline dyestuffs during the war [WWI and WWII], which were formerly imported from Germany, Bilberries were eagerly bought up at high prices by dye manufacturers during the War, so that in 1917 and 1918 a large proportion of the Bilberry crop was not available for jam-making, as the dyers were scouring the country for the little blue-black berries. Before the War, immense quantities of them were imported annually from Holland, Germany and Scandinavia. They were used mainly by pastrycooks and restaurant-keepers. On the Continent, they were once used to colour wine.

The 'Huckleberry' of North America, so widely appreciated there, is our Bilberry - the name being an obvious corruption of 'Whortleberry.'   V. resinosum, V. damusum, and V. gorymbosum have properties resembling those of V. myrtillus.

The Bog Bilberry ( V. uliginosum) is a smaller, less erect plant, with round stems and untoothed leaves, greyish green beneath. Both flowers and berries are smaller than those of the common Bilberry. This kind is quite absent in the south and only to be found in mountain bogs and moist copses, in Scotland, Durham and Westmorland. The berries of both species are a favourite food of birds.

According to Mrs Grieve, [see observation] , Bilberries help to promote lactation in both humans and other animals.  Furthermore, they help with mouth ulcers, diarrhoea and dysentery, scurvy and urinary complaints, oedema and stones of various kinds.  A tea made of the leaves is said to help with diabetes.

The Diabetes association in the UK has supported the use of bilberries for diabetes, especially in helping with retinopathy [see observation] and their analysis is based on the scientific evidence accumulating for the anthocyanosides which are not only in bilberries but also in : The fruit is globular, with a flat top, about the size of a black currant. When eaten raw, they have a slightly acid flavour. When cooked, however, with sugar, they make an excellent preserve.   Gerard tells us that 'the people of Cheshire do eate the black whortles in creame and milke as in these southern parts we eate strawberries.'

Stewed with a little sugar and lemon peel in an open tart, Bilberries make a very enjoyable dish.

Owing to its rich juice, the Bilberry can be used with the least quantity of sugar in making jam: half a pound of sugar to the pound of berries is sufficient if the preserve is to be eaten soon. The minuteness of the seeds makes them more suitable for jam than currants.
Photo from Martin Dawes

We are at the height of the bilberry season and there’s a glut of the sweet-sharp, tiny little berries out on the moors. Drive out along Ringinglow, stop the car when you get to the heather and the nearest bilberry won’t be far away. Picking them is reasonably easy if you have a bilberry comb (see picture), a plastic box with ‘teeth’ on one side which rakes the berries off the twigs and stores them until you can shake them into a suitable container, usually an old ice cream container. It’s not hard but, then, nothing is too easy: be prepared for midges, backache and juice stained hands and clothes. Don’t go out in your Sunday best!

So what are you going to do with them when you’ve picked a pound or two? Here are six ideas below.