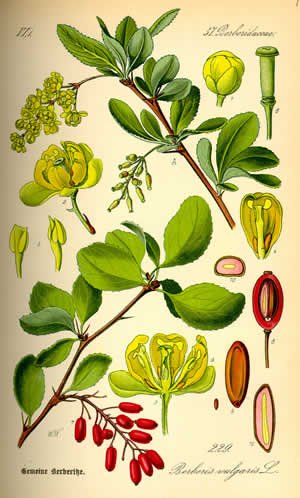 Berberis vulgaris L., also known as European barberry or simply Barberry, is a shrub in the genus Berberis.   The shrub is native to central and southern Europe, northwest Africa and western Asia; it is also naturalised in northern Europe, including the British Isles and Scandinavia, and North America. In the United States and Canada, it has become established in the wild over an area from Nova Scotia to Nebraska, with additional populations in Colorado, Idaho, Washington State, Montana, and British Columbia. Although not naturalised, in rural New Zealand it has been widely cultivated as a hedge on farms. It is cultivated for its fruits in many countries.

And not only are its fruits edible, but they have healing properties.

Barberry has played a prominent role in herbal healing for more than 2,500 years. Twenty two alkaloids have been reported so far from root, stem leaves and fruit of this plant, which are of medicinal importance. It is also a widely used medicine in the Homeopathic system of medicine for kidney pain and for removal of kidney stones.  There are many scientific papers now appearing on PubMed that show it has other uses in lowering high blood pressure and in treating liver disease, as well as some skin problems.  The observations provide more details. 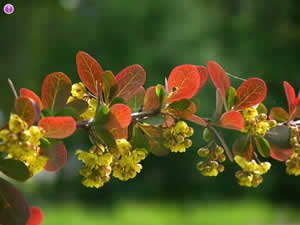 The plant is used medicinally all over the world from Asia to the Americas.

Berberis vulgaris fruits have been used in traditional Austrian medicine internally as tea, jelly or syrup for treatment of disorders of the respiratory tract, fever, infections, cold, and flu.

Berberis vulgaris L. is also well known in Iran and various parts of this plant including its root, bark, leaf and fruit have been used as folk medicine for thousands of years. Two decades of research in Iran has demonstrated different pharmacological and therapeutic effects of B. vulgaris and its isoquinoline alkaloids (particularly berberine). Studies in Iran carried out on the chemical composition of the plant show that the most important constituents of this plant are isoquinoline alkaloids such as berberine, berbamine and palmatine. Berberine represents one of the most studied among the naturally occurring protoberberine alkaloids of the plant.

The fruit and the bark needless to say have different healing properties and generally the root extract is found in Homeopathic medicines, whereas the fruits can be just eaten

Mrs Grieves
The berries contain citric and malic acids, and possess astringent and anti-scorbutic properties. They are useful in inflammatory fevers, especially typhus, also in bilious disorders and scurvy, and in the form of a jelly are very refreshing in irritable sore throat, for which also a syrup of Barberries made with water, proves an excellent astringent gargle.  The Egyptians are said still to employ a diluted juice of the berries in pestilential fevers, and Simon Paulli relates that he was cured of a malignant fever by drinking an infusion of the berries sweetened with sugar and syrup of roses.

I have added an observation from Mrs Grieve related to the root extract.

If you want to grow your own plants, then be aware that they are the host to a sort of fungus on the leaves

Professor Henslow (Floral Rambles in Highways and Byways) :
It was thought by farmers in the middle of the last century that the Barberry blighted wheat if it grew near the hedge. Botanists then ridiculed the idea; but in a sense the farmers were right! What they observed was that if a Barberry bush grew, say, at the corner of a wheatfield the leaves of the wheat became "rusty," i.e. they were streaked with a red colour when close to the bush; and that this "red rust" extended steadily across the field till the whole was rusted. The interpretation was at that time unknown. A fungus attacks the leaves of the Barberry, making orange-coloured spots. It throws off minute spores which do attack the wheat. These develop parasitic threads within the leaf, from which arise the red rust-spores: subsequently dark brown or black spores, consisting of two cells, called wheat-mildew, appear. After a time these throw off red, onecelled spores which attack the Barbarry; and so a cycle is completed. Though it was not really the bush which blighted the wheat, the latter suffered through its agency as the primary host plant.'

Mrs Grieve
The roots boiled in Iye, will dye wool yellow, and in Poland they dye leather of a beautiful yellow colour with the bark of the root. The inner bark of the stems will also dye linen of a fine yellow, with the assistance of alum. 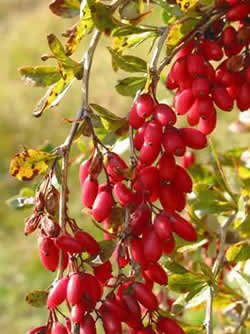 Berberis produces edible but sharply acidic berries, which can be eaten raw as a tart and refreshing fruit, or can be made into jellies or jams.

Raw - Eaten raw, the berries are rich in vitamin C, and have a very sharp flavour.

Mrs Beeton
Barberries are used as a dry sweetmeat, and in sugar-plums or comfits; are pickled with vinegar and are used for various culinary purposes. They are well calculated to allay heat and thirst in persons afflicted with fevers. The berries arranged on bunches of nice curled parsley, make an exceedingly pretty garnish for supper-dishes, particularly for white meats, like boiled fowl à la Béchamel; the three colours, scarlet, green and white contrasting so well, and producing a very good effect.

Sweets - A widely available Russian candy called Барбарис (Barberis) is made using extract from the berries, which are pictured on the wrapper.

Mrs Grieves Barberry drops
The black tops must be cut off; then roast the fruit before the fire till soft enough to pulp with a silver spoon through a sieve into a china basin; then set the basin in a sauce pan of water, the top of which will just fit it, or on a hot hearth, and stir it till it grows thick. When cold, put to every pint 1 1/2 lb. of sugar, the finest double-refined, pounded and sifted through a lawn sieve, which must be covered with a fine linen to prevent its wasting while sifting. Beat the sugar and juice together 3 1/2 hours if a large quantity, but 2 1/2 for less; then drop it on sheets of white, thick paper, the size of the drops sold in the shops. Some fruit is not so sour and then less sugar is necessary. To know if there be enough, mix till well incorporated and then drop; if it runs, there is not enough sugar, and if there is too much it will be rough. A dry room will suffice to dry them. No metal must touch the juice but the point of a knife, just to take the drop off the end of the wooden spoon, and then as little as possible. 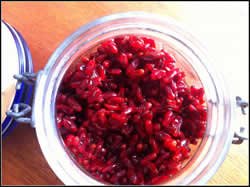 Jams and jellies - In Europe, the berries have been traditionally used as an ingredient in making jam. The berries are high in pectin which makes the jam congeal easily as it cools after having been boiled.

Mrs Grieve on Barberry jelly
The Barberry used to be cultivated for the sake of the fruit, which was pickled and used for garnishing dishes. The ripe berries can be made into an agreeable, refreshing jelly by boiling them with an equal weight of fine sugar to a proper consistence and then straining it. They were formerly used as a sweetmeat, and in sugar-plums, or comfits. It is from these berries that the delicious confitures d'epine vinette, for which Rouen is famous, are commonly prepared.

Savoury dishes -  In southwestern Asia, especially Iran, the berries are used in cooking.  Zereshk (زرشک) or sereshk is the Persian name for the dried fruit of Berberis spp.  Zereshk is widely used in cooking, imparting a tart flavour, for example, to chicken dishes. It can also be cooked with rice, called zereshk polo.  In Iran, barberries are commonly used as a currant in rice pilaf

From the Gloucester times Food for thought page [follow link for recipe]
.... I began seeing barberries on the menus of restaurants I love.  Just last week at Oleana, a hands-down favorite destination with Middle Eastern inspiration, my friends and I chose a Vermont quail with Baharat, barberries and pistachios to share.  Barberries kept appearing on plates in my life, but I kept refusing to believe this was the same dangly red berry so common it could be considered garden-trite.

One suggestion for its use which I found interesting was as a replacement for tamarind, which is not as easy to find in Europe or North America.

Fresh date chutney
Mix one packet fresh chopped sweet dates with one teaspoon of ground cardamon seeds and tamarind/barberry juice to taste.  Use with grilled meats especially chicken, or with cheese. 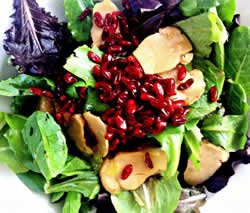 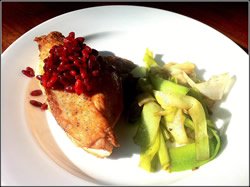 Each of the observations show how it heals.  The following list extracted from Dr Duke's database shows the constituents of the fruit alone.  Some chemicals are found in the plant in general - this too is shown. In order to see the chemical composition of the rest of the parts of the whole plant go to the Dr Duke database.