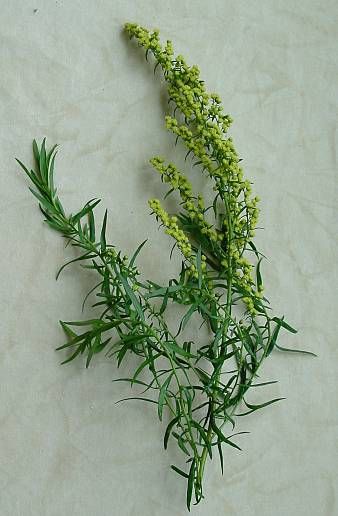 Artemisia  is a large, diverse genus of plants with between 200 to 400 species belonging to the daisy family Asteraceae. It comprises hardy herbs and shrubs known for their volatile oils. They grow in temperate climates of the Northern Hemisphere and Southern Hemisphere, usually in dry or semi-dry habitats. The fern-like leaves of many species are covered with white hairs.

Common names used for several species include wormwood, mugwort, sagebrush and sagewort, while a few species have unique names, notably Tarragon (A. dracunculus) and Southernwood (A. abrotanum). Occasionally some of the species are called sages, causing confusion with the Salvia sages in the family Lamiaceae.

Most species have strong aromas and bitter tastes from terpenoids and sesquiterpene lactones, which exists as an adaptation to discourage herbivory. The small flowers are wind-pollinated.

Artemisia species are used as food plants by the larvae of a number of Lepidoptera species.

The genus Artemisia may be named after an ancient botanist. Artemisia was the wife and sister of the Greek/Persian King Mausolus from the name of whose tomb we get the word mausoleum. Artemisia, who ruled for three years after the king's death, was a botanist and medical researcher, and died in 350 B.C.

The aromatic leaves of many species of Artemisia are medicinal, and some are used for flavouring. The principle proven medicinal use is as an anthelmintic.   Anthelmintics or antihelminthics are chemicals that expel parasitic worms (helminths) from the body by either stunning or killing them and without causing significant damage to the host. They may also be called vermifuges (those which stun) or vermicides (those which kill).  Some species of Artemisia has proven medicinal and healing powers against the parasites that cause malaria.

Most species have an extremely bitter taste. A. dracunculus (Tarragon) is widely used as a herb, particularly important in French cuisine. 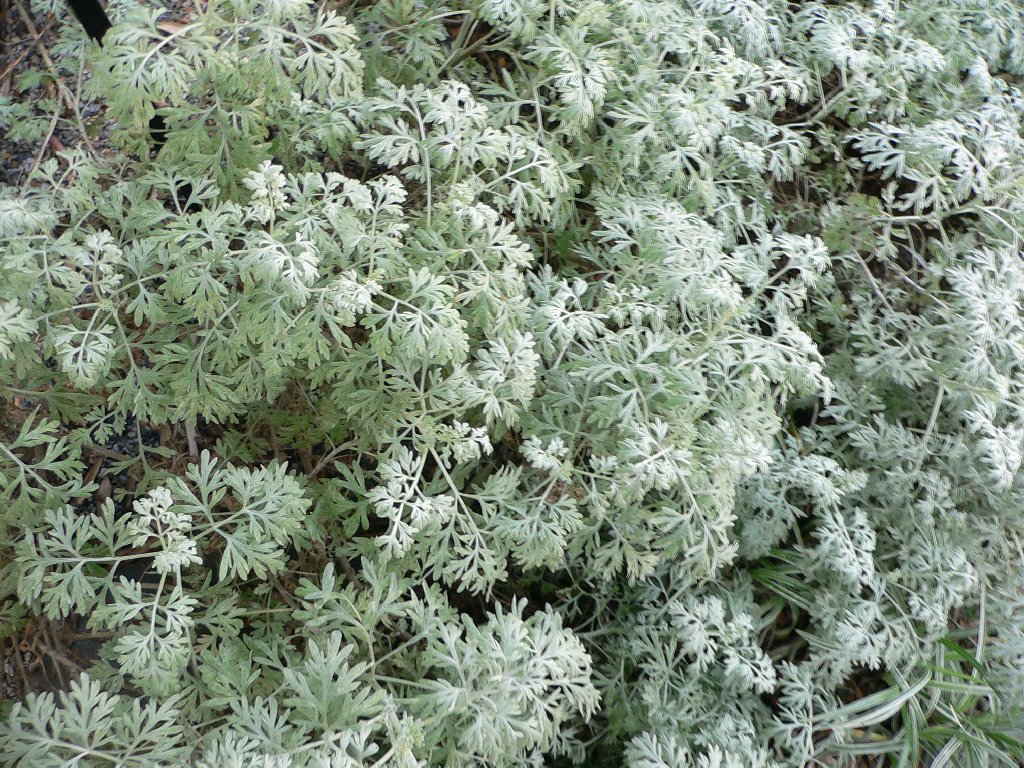 Artemisia absinthium (Absinth Wormwood) was used in brewing (wormwood beer, wormwood wine). The aperitif vermouth (derived from the German word Wermut, "wormwood") is a wine flavored with aromatic herbs, but originally with wormwood. The highly potent spirits absinthe and Malört also contain wormwood. Polish vodka Zoladkowa Gorzka is flavoured with wormwood.  Note that its use in these drinks had its risks - one of which was thujone poisoning and death - see Drinking absinthe.

I will describe some of the historical beliefs about artemisia here, but its proven uses are confined to the observation section where research has confirmed traditional beliefs.  Here also the specific species of the plant used are also described - not just the generic term 'artemisia', which as we can see covers a vast range of plants - some edible, some not, some medicinal, some not. 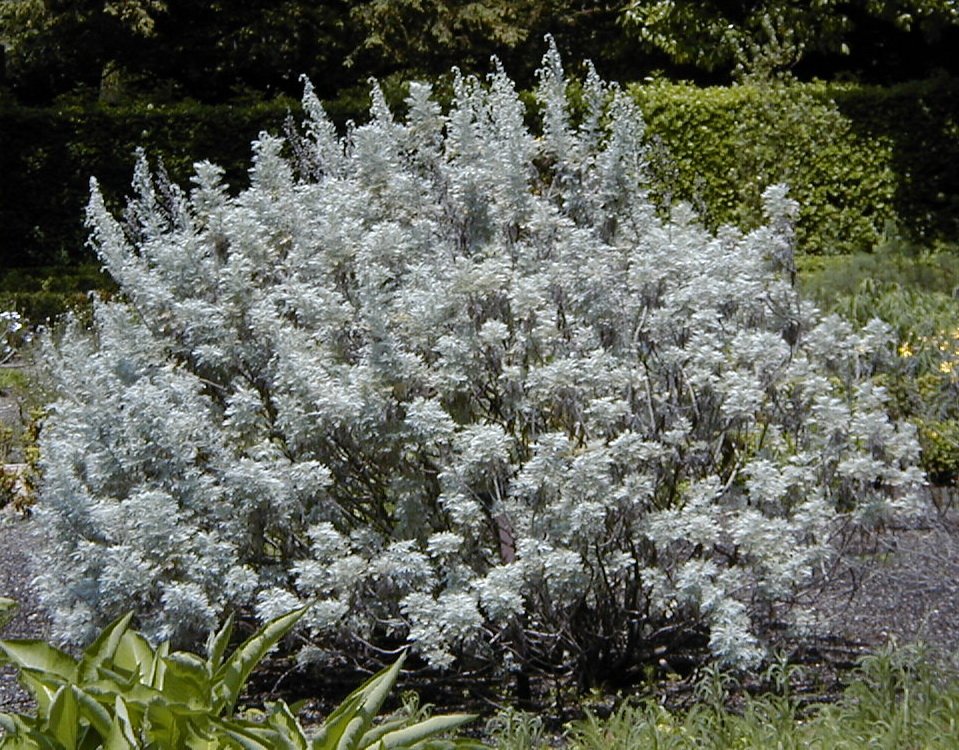 Artemisia arborescens (Tree Wormwood, or Sheeba in Arabic) is a very bitter herb indigenous to the Middle East that is used in tea, usually with Mentha also known as mint. In small quantities (in tea) it was "believed to have medicinal properties, pacifying various kinds of digestion turmoils. In Israel Artemisia is sometimes referred to by the name "Shiva", the Queen of Sheba".

There are up to eight references in the Bible to wormwood and they probably relate to this species.  Its awful taste was also known, as a drinkable preparation applied for specific reasons. 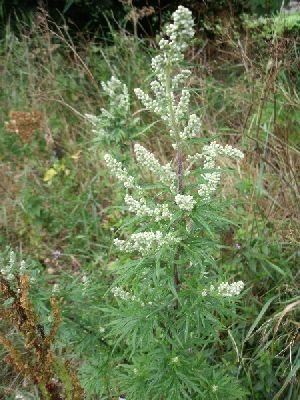 Artemisia vulgaris (mugwort) is one of several species in the genus Artemisia which have common names that include the word mugwort. This species is also occasionally known as Felon Herb, Chrysanthemum Weed, Wild Wormwood, Old uncle Henry, Sailor's Tobacco, Naughty Man, Old Man or St. John's Plant (not to be confused with St John's wort).  The mugwort plant was once used as an anthelminthic.

And here traditional use is born out in practise as can be seen from the observations.

Artemisia vulgaris  is native to temperate Europe, Asia, northern Africa and Alaska and is naturalized in North America, where some consider it an invasive weed. It is a very common plant growing on nitrogenous soils, like weedy and uncultivated areas, such as waste places and roadsides.

Something now from the slightly loony fringe, don't take the following as advice, all good fun as long as you don't poison yourself, no doubt the out of body experiences mentionned are from poisoning, one step towards near death...... 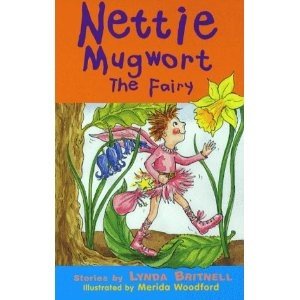 Internet witchcraft site
In the Middle Ages, mugwort was used as a magical protective herb. Mugwort is one of the nine herbs invoked in the pagan Anglo-Saxon Nine Herbs Charm, recorded in the 10th century in the Lacnunga.
Much used in witchcraft, mugwort is said to be useful in inducing out of body experiences. .... One common method of ingestion is to smoke the plant [sic!].
Within such religious practices as Wicca, both Wormwood and Mugwort are believed to have multiple effects on the psychic abilities of the practitioner. Because of the power believed to be inherent in certain herbs of the genus Artemisia, many believers cultivate the plants in a "moon garden".   The beliefs surrounding this genus are founded upon the strong association between the herbs of the genus Artemisia and the moon goddess Artemis, who is believed to hold these powers.

I'm afraid there were no PubMed papers on how to cultivate moon gardens or improve your psychic abilities by smoking it. 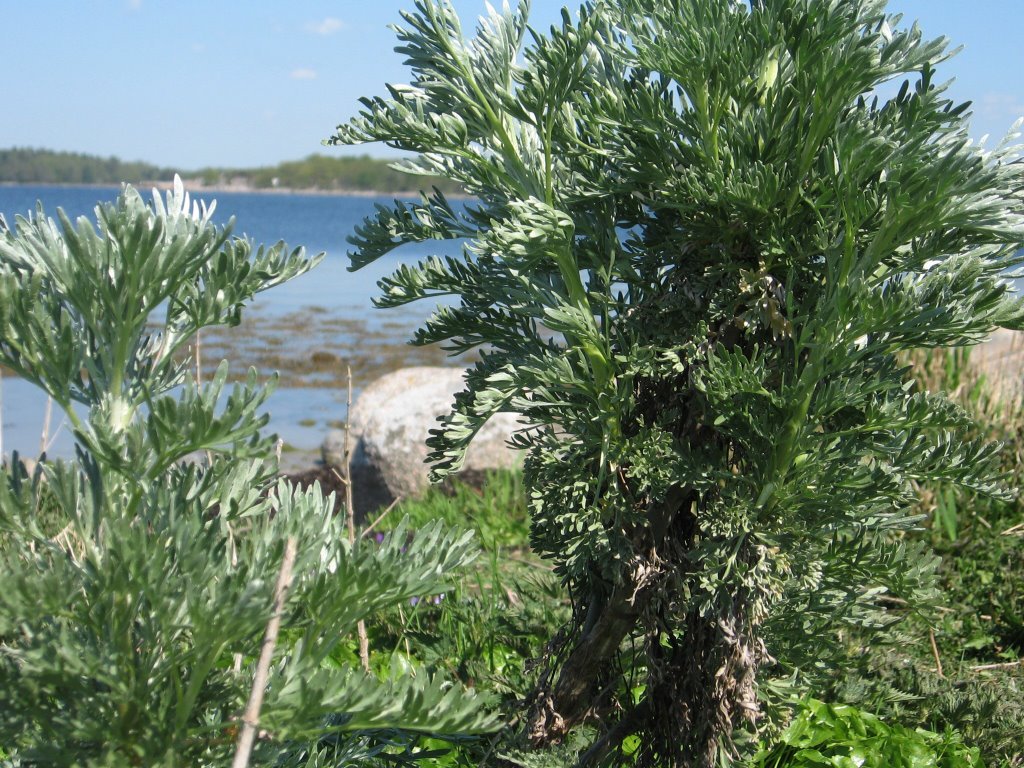 Artemisia maritima is a species of wormwood known as sea wormwood and old woman.  In its many variations of form it has an extremely wide distribution in the northern hemisphere of the Old World, occurring mostly in saltish soils. It is found in the salt marshes of the British Isles, on the coasts of the Baltic, of France and the Mediterranean, and on saline soils in Hungary; thence it extends eastwards, covering immense tracts in Southern Russia, the region of the Caspian Sea and Central Siberia to Chinese Mongolia. In Britain it is found as far as Wigton on the West and Aberdeen on the East; also in north-east Ireland and in the Channel Islands.
This plant is the botanical symbol of Saint Ninian. The plant is the source of the alkaloid Santonin.  Santonin was an agent which was once used for parasitic worms.

It  was very complicated to use and entailed rather serious risk to the patient. Nearly every formulary and herbal which lists santonin or santonin-containing plants lists the real risk of blindness and of fatal reactions; even small doses of santonin cause disturbances of vision.

Encyclopædia Britannica
.....Santorin can  produce toxic effects, aphasia, muscular tremors and epileptiform convulsions, and the disturbances of vision may go on to total blindness 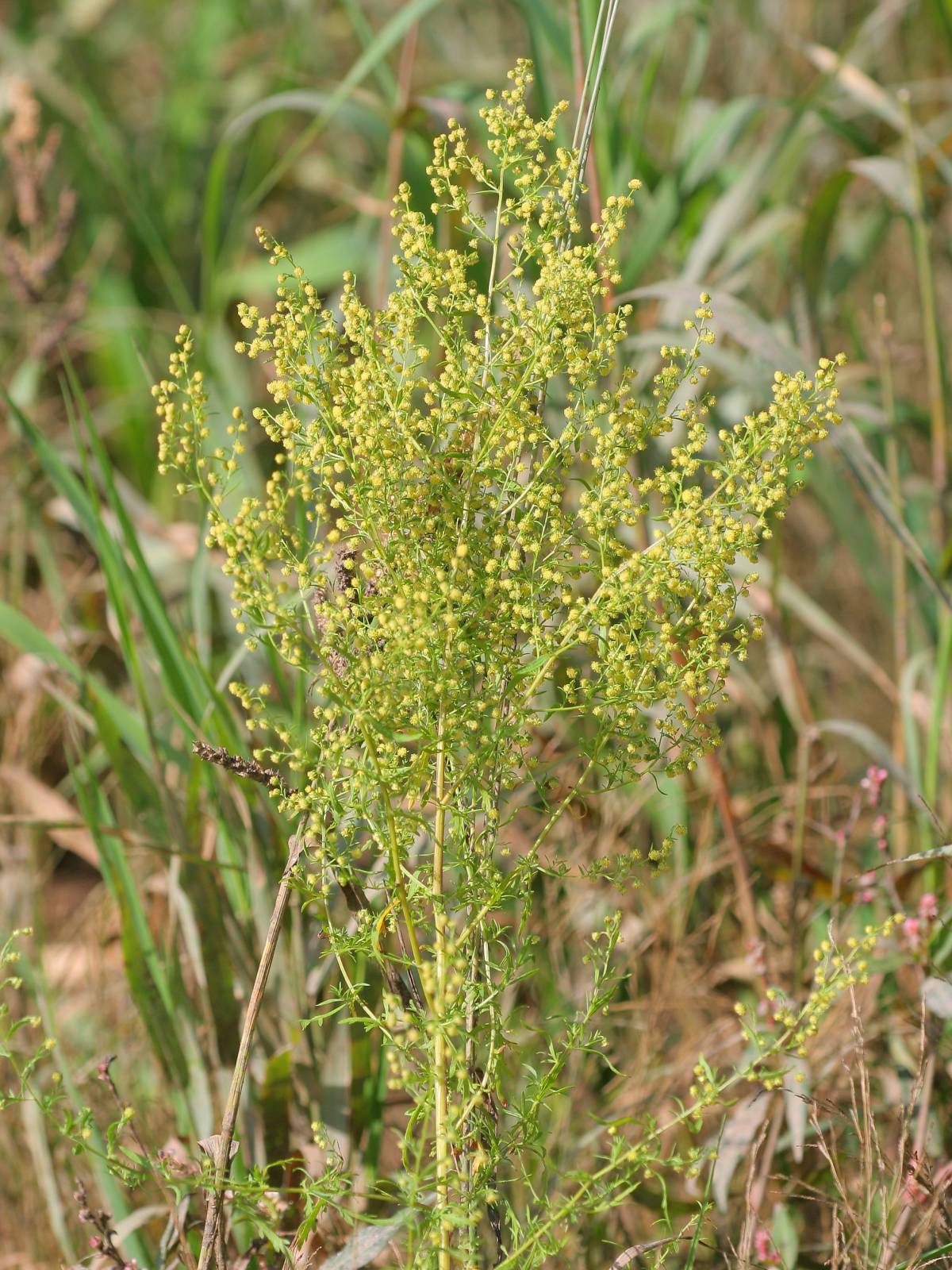 Artemisia annua (A. annua) is a common herb found in many parts of the world, and has been used by Chinese herbalists for more than two thousand years in the treatment of malaria.

The earliest record dates back to 200 BC, in the "Fifty-two Prescriptions" unearthed from the Mawangdui Han Dynasty tombs.

Its antimalarial application was first described, in Zhouhou Beiji Fang ("The Handbook of Prescriptions for Emergencies", Chinese: 肘后备急方), edited in the middle of the fourth century by Ge Hong; in that book, 43 malaria treatment methods were recorded.
In 1967, a plant screening research program, under the name Project 523, was set up by the Chinese army to find an adequate treatment for malaria; the program and early clinical work were ordered by Chairman Mao Zedong at the request of North Vietnamese leaders to provide assistance for their malaria-ridden army. 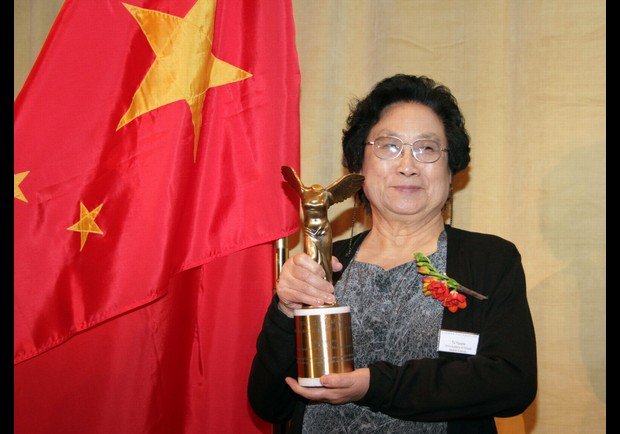 In the course of this research, Tu Youyou 屠呦呦 discovered artemisinin in the leaves of Artemisia annua .  The drug is named Qinghaosu (Chinese: 青蒿素) in Chinese.

Tu Youyou also discovered that a low-temperature extraction process could be used to isolate an effective antimalarial substance from the plant; Tu said she was influenced by a traditional Chinese herbal medicine source saying that this herb should be steeped in cold water. The extracted substance, once subject to purification, proved to be a usable antimalarial drug - malaria is a parasitic infection.

By 2012, artemisinin-based therapies were in common use and were considered "one of the most effective drugs for treatment of malaria"; it was also reported to clear malaria parasites from patients' bodies faster than other drugs. In addition to artemisinin, Project 523 developed a number of products that can be used in combination with artemisinin, including lumefantrine, piperaquine, and pyronaridine.

After the Chinese economic reform in the late 1970s and early 1980s, news of the discovery reached scientists outside China via results published in the Chinese Medical Journal.   "The research was met with skepticism in western researchers at first, partly because the chemical structure of artemisinin, particularly the peroxide portion, appeared to be too unstable to be a viable drug."

The word ACT is used for artemisinin-based combination therapies (ACTs).  In 2006, after artemisinin had become the treatment of choice for malaria, the WHO called for an immediate halt to single-drug artemisinin preparations in favor of combinations of artemisinin with another malaria drug, to "reduce the risk of parasites developing resistance".  It is a little unclear why resistance should not happen in combinations, but should happen in a single chemical - I'm sure the pharmaceutical companies selling the drugs used in the combinations might be better at explaining it than I am. 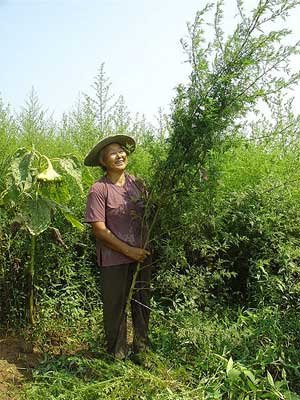 I hope you can see from the list of plants I have described that although all probably have some anti-parasitic activity, some are safer than others and the chemicals that achieve this anti-parasitic action are different in each case.

There are some truly dangerous videos currently showing on youtube that praise the individual species as a whole, as though each species of plant had exactly the same properties - they don't.

Furthermore these videos name every single sub-species as ... mugwort.

There are about 400 species of this plant - you must know which one you are talking about.

I have provided some observations from Dr Duke to help show the differences.