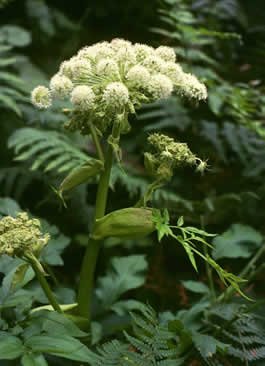 Angelica is a biennial or perennial herb with about 60 species. The species, as a whole, has many uses:

In this context however I want to concentrate on one species within this broader family.

Angelica archangelica, commonly known as Garden Angelica, Holy Ghost, Wild Celery, and Norwegian angelica, is a biennial plant from the Apiaceae family, a subspecies of which is cultivated for its sweetly scented edible stems and roots.  And scientists have found that if it is combined with other Ferulic acid containing plants it helps those with Dementia and Alzheimers.  One of the reasons it can do this is because Ferulic acid is an anti-oxidant, but it also appears to be a chelation agent which means it may be able to get rid of various toxins in our bodies.

Ferulic acid is a type of organic compound. Its name comes from the word Ferula, referring to the giant fennel. 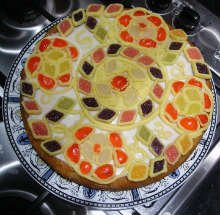 Like several other species in Apiaceae, edible Angelica is similar to several poisonous species (Conium, Heracleum, and others), and should not be consumed unless it has been identified with absolute certainty.
A. sylvestris is eaten by the larvae of some Lepidoptera species including Bordered Pug, Grey Pug, Lime-speck Pug and the V-Pug., which is an indicator that it contains toxins. Use angelica to decorate a cake, enjoy a glass of Chartreuse, but be very careful about identification in the wild.

If you now turn to the section on Ferulic acid, you will see a long list of foods that contain it.  If the objective is to chelate yourself of toxins, what better way than to combine the ingredients.  Think of the wonderful concoctions you could conjure up here with this list of ingredients.

Your granny will love it.

It appears to help healing- see the observations.

It is worth adding that this group of plants has been cited in some less than reliable New Age guides to shamanism, as having 'hallucinogenic properties'. This is incorrect. There is only one way that you could get a hallucination from angelica and that is by misidentification with one of the poisonous plants that look like it.

The main problem is that the research is not complete.

The scientists have only made the link so far with dementia, which is good, but in a true cause based approach one would work back and say - yes but what caused the dementia in the first place?  Clearly if it was caused by toxins or bacteria or viruses other than those helped by angelica and ferulic acid, nothing would happen, no health benefits would accrue.  Furthermore, there is the need to know what exactly it does chelate.  If it also chelates iron, zinc, manganese, copper and so on you may be losing essential minerals.

There again, if it chelates iron and the old people's home helpers are overdosing the old people on iron supplements, you may have the reason the angelica works.  Rather ironic, n'est ce pas?

Remember a little angelica on a cake or in a salad is not an overdose, as such the risks in eating it are low. 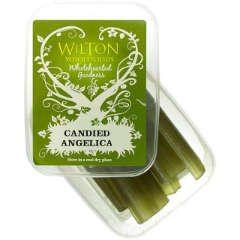