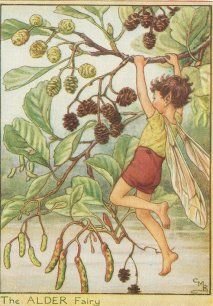 Alnus glutinosa, the common alder, black alder, European alder or just alder, is a species of tree in the family Betulaceae. It thrives in wet locations where its association with the bacterium Frankia alni enables it to grow in poor quality soils.  Other names for the plant are:

The common alder provides food and shelter to wildlife, with a number of insects, lichens and fungi being completely dependent on the tree.  Some 47 species of mycorrhizal fungi have been found growing in symbiosis with the common alder, both partners benefiting from an exchange of nutrients.  The seeds are a useful winter food for birds. Deer, sheep, hares and rabbits feed on the tree and it shades the water of rivers and streams, moderating the water temperature, which benefits fish which also find safety among its exposed roots. 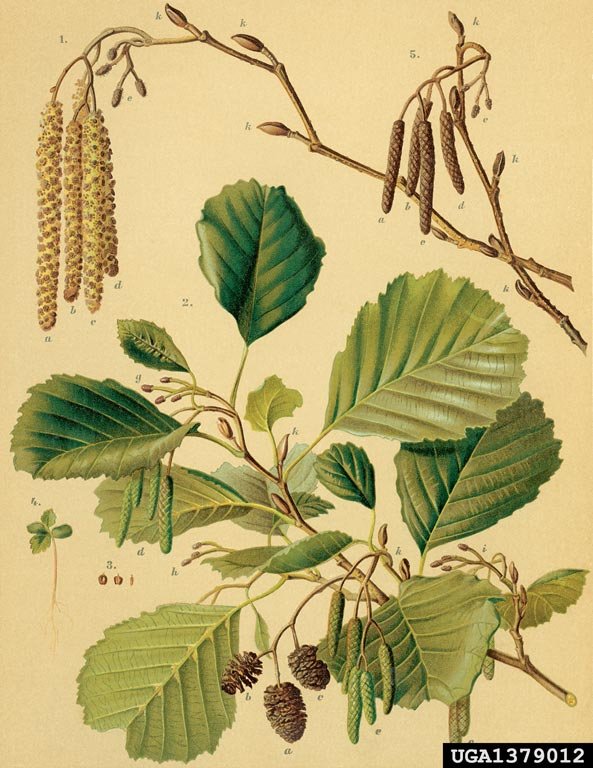 It is a pioneer species, colonising vacant land and forming mixed forests as other trees appear in its wake. This has led to interest in its use as a bioremedial plant and this is explored in more detail below.  Products of the tree have been used in ethnobotany, providing folk remedies for various ailments.

The bark of the common alder has long been used in tanning and dyeing, various shades of brown, fawn, and yellowish-orange hues can be imparted to wool, cotton and silk. Alder bark can also be used with iron sulphate to create a black dye, the catkins can yield a green colour and the fresh-cut wood a pinkish-fawn colour.

The timber has been used for manufacture into paper and fibreboard, and even for smoking foods. The entry from Mrs Grieve provides a good summary of its numerous uses, past and present.  Under water the wood is very durable and is used for deep foundations of buildings. The piles beneath the Rialto in Venice, and the foundations of several medieval cathedrals are made of alder. The Roman architect Vitruvius mentioned that the timber was used in the construction of the causeways across the Ravenna marshes.  It is valued in turnery and carving, in making furniture, window frames, clogs, toys, blocks, pencils and bowls.

This clever closet is made from alder (Alnus glutinosa) wood and for maker Janis Straupe, is a functional sculpture 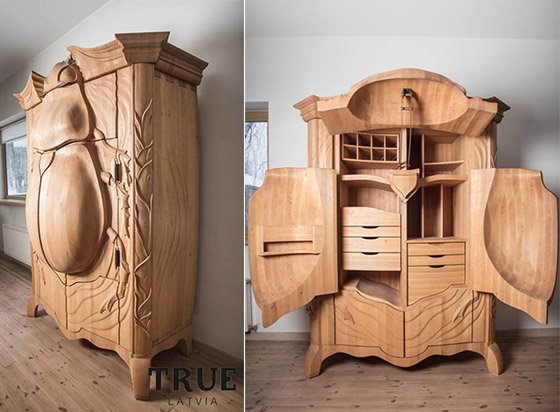 The Alder is a medium size, short-lived tree growing to a height of up to 30 metres (100 ft). In poor conditions it grows only to the size of a shrub.  It can be found growing in moist woods or pastures, or by streams.  Eventually, common alder dies out of woodlands because the seedlings need more light than is available on the forest floor. This is why it is more frequently found by forest edges, or in swamps and riverside corridors. 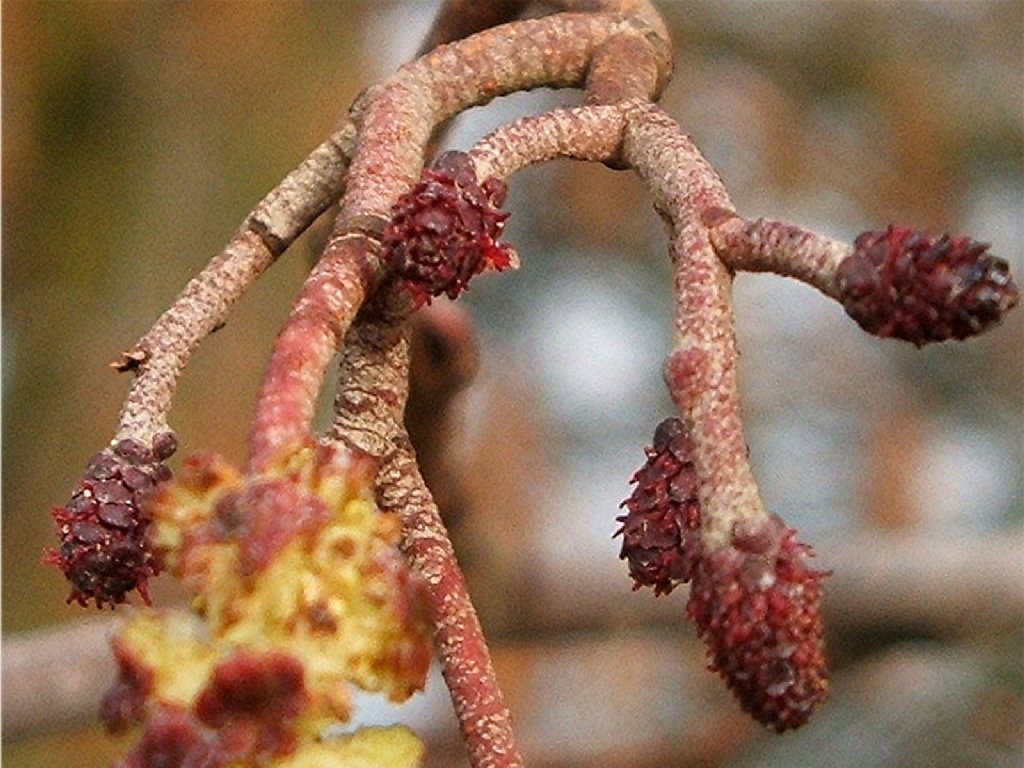 The leaves are broadly ovate, short stalked, and usually smooth with serrated edges.  They have a glossy dark green upper surface and paler green underside with rusty-brown hairs in the angles of the veins. As with some other trees growing near water, the common alder keeps its leaves longer than do trees in drier situations, and the leaves remain green late into the autumn. As the Latin name glutinosa implies, the buds and young leaves are sticky with a resinous gum.

It has separate male and female flowers in the form of catkins. The flowers appear in early spring, before the leaves are fully out.  The flowers are wind-pollinated; the slender cylindrical male catkins are pendulous, reddish in colour and 5 to 10 cm (2 to 4 in) long; the female flowers are upright, broad and green, with short stalks. During the autumn they become dark brown to black in colour, hard, somewhat woody, and superficially similar to small conifer cones. They last through the winter and the small winged seeds are mostly scattered the following spring.

The seeds are flattened reddish-brown nuts edged with webbing filled with pockets of air. This enables them to float for about a month which allows the seed to disperse widely.  The seeds are dispersed by wind and water, however, if the tree is felled, regrowth occurs from the stump, and logs and fallen branches can take root. 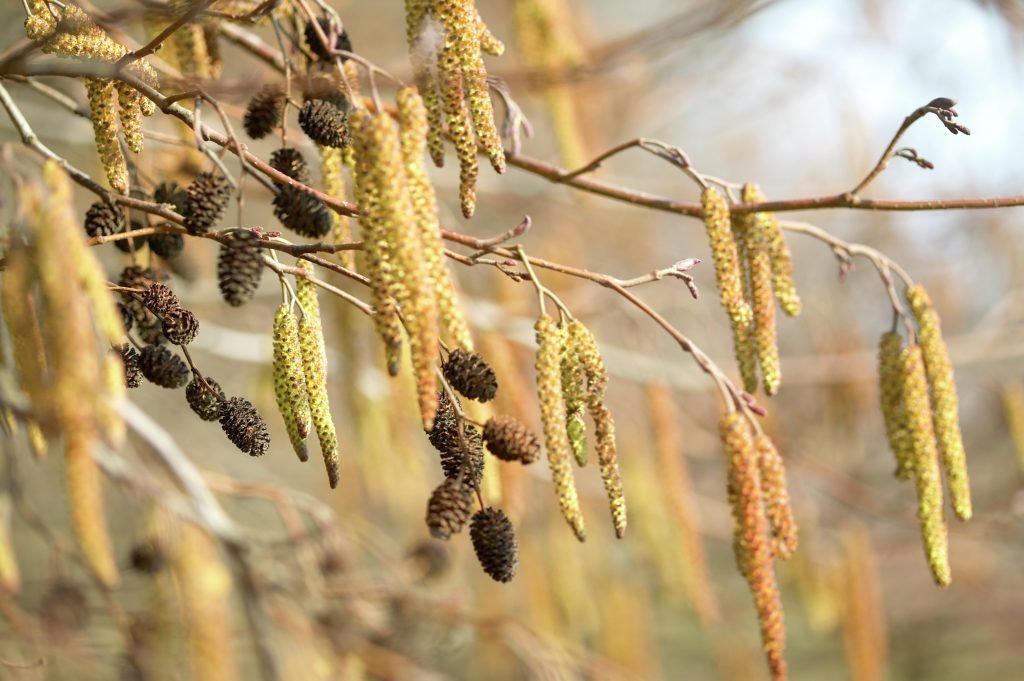 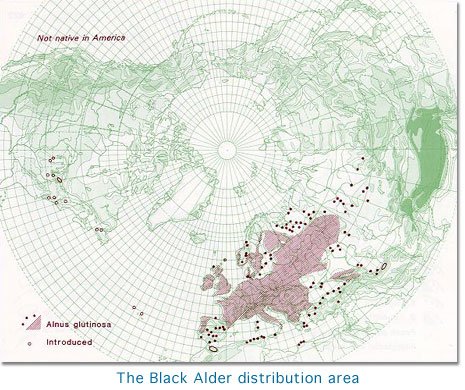 The common alder is native to almost the whole of continental Europe (except for both the extreme north and south) as well as the United Kingdom and Ireland. In Asia its range includes Turkey, Iran and Kazakhstan, and in Africa it is found in Tunisia, Algeria and Morocco. It is naturalised in the Azores. It has been introduced, either by accident or by intent, to Canada, the United States, Chile, South Africa, Australia and New Zealand.

It tolerates a range of soil types and grows best at a pH of between 5.5 and 7.2. Because of its association with the nitrogen-fixing bacterium Frankia alni, it can grow in nutrient-poor soils where few other trees thrive. 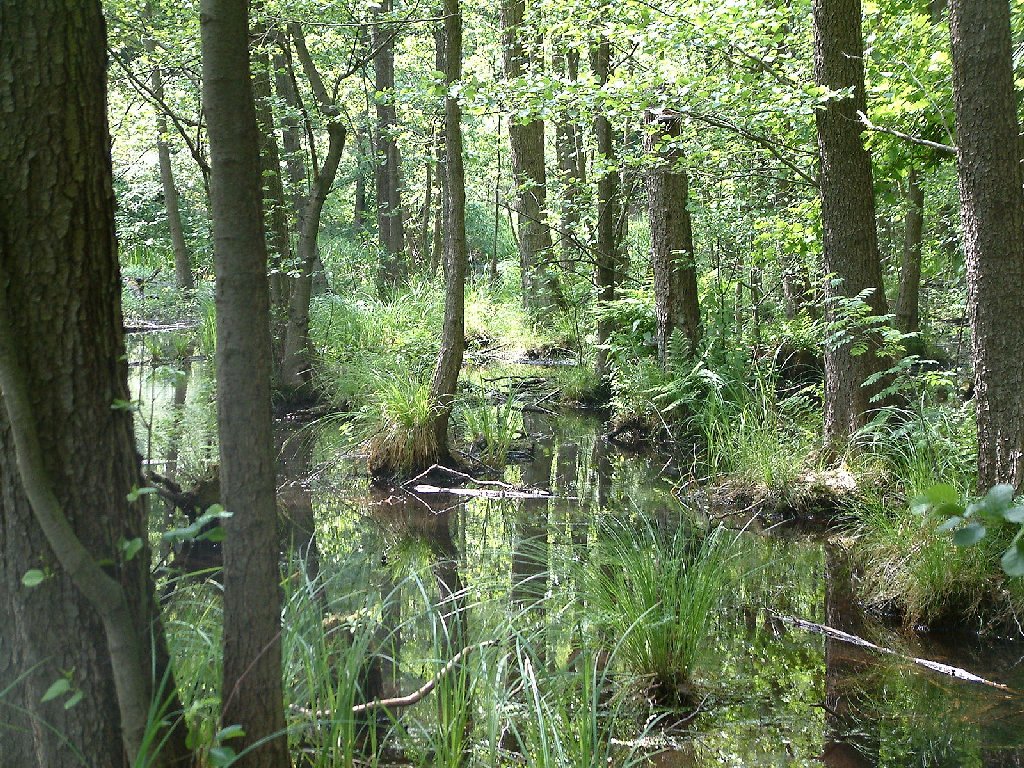 One area of great interest in recent years has been the ability of the alder to chelate heavy metals from soils, thus as a bioremedial plant.  It has very extensive bioremedial potential being able to cope with some extremely dangerous heavy metals such as mercury, lead and cadmium.  This ability is of added interest because of the wide range of climates in which it will survive.

It can be used to stabilise river banks, to assist in flood control, to purify water in waterlogged soils and to moderate the temperature and nutrient status of water bodies.  It is capable of enduring clipping as well as marine climatic conditions and can be cultivated as a fast-growing windbreak. 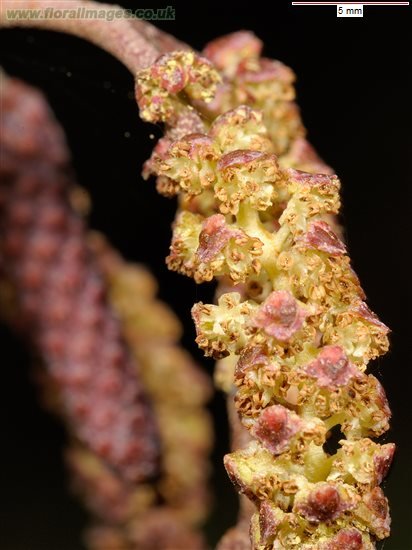 A number of very useful studies has been undertaken on the plant to see the effects of planting stands of mixed trees or single stands.  One clear finding that has emerged is that if the plant is used in urban environments to remove the lead from petrol and diesel fumes that has contaminated soil, the plants need to be kept well away from underground services, as in a carbon dioxide rich environment [which most cities are], the roots grow far more extensively, even if the soils are contaminated.

Outside the urban environment, a warning has also been issued about planting the alder in methane rich soils:

Wetland-adapted trees are known to transport soil-produced methane (CH4 ), an important greenhouse gas to the atmosphere, ….. We examined the spatial and temporal variability in stem CH4 emissions in situ and their controls in two wetland-adapted tree species (Alnus glutinosa and Betula pubescens) located in a temperate forested wetland. Soil and herbaceous plant-mediated CH4 emissions from hollows and hummocks also were measured, thus enabling an estimate of contributions from each pathway to total ecosystem flux.
Stem CH4 emissions varied significantly between the two tree species, with Alnus glutinosa displaying minimal seasonal variations, while substantial seasonal variations were observed in Betula pubescens. Trees from each species emitted similar quantities of CH4 from their stems regardless of whether they were situated in hollows or hummocks.
Soil temperature and pore-water CH4 concentrations best explained annual variability in stem emissions, while wood-specific density and pore-water CH4 concentrations best accounted for between-species variations in stem CH4 emission.
Our study demonstrates that tree-mediated CH4 emissions contribute up to 27% of seasonal ecosystem CH4 flux in temperate forested wetland, with the largest relative contributions occurring in spring and winter. Tree-mediated CH4 emissions currently are not included in trace gas budgets of forested wetland. Further work is required to quantify and integrate this transport pathway into CH4 inventories and process-based models.    PMID:  25665153 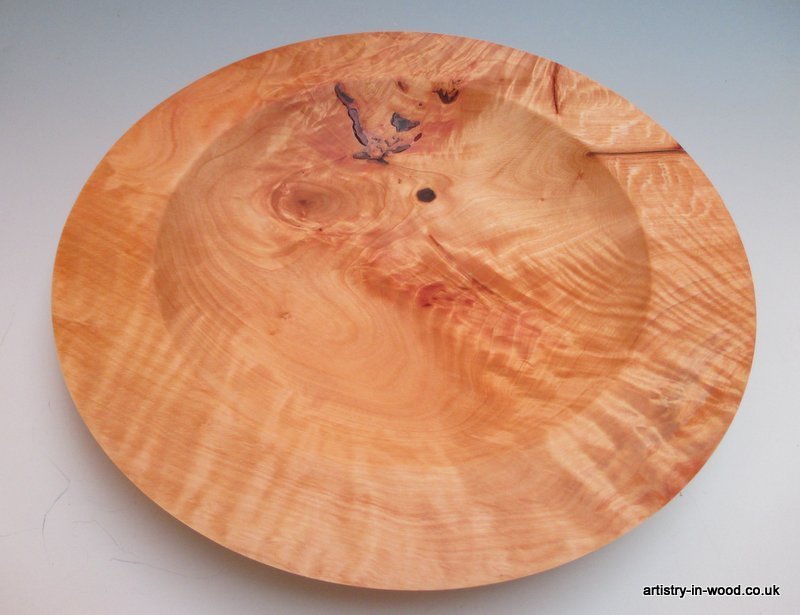 Otherwise, however, Alder is a very key bioremedial plant.  It increases the availability of phosphorus in the ground, and the tree's dense network of roots can cause increased sedimentation in pools and waterways, which in flooded land can be of great help, helping with reclamation.

One of its additional advantages is its symbiotic relationship with the bacterium Frankia alni, which forms nodules on the tree's roots. This bacterium absorbs nitrogen from the air and fixes it in a form available to the tree. In return, the bacterium receives carbon products produced by the tree through photosynthesis. This relationship, both improves the fertility of the soil, and means it is an essential tree in areas of high carbon emissions.

The observations provide the detailed research available for alder and we have an analysis by Dr Duke as well.  Suffice to say, however, that many of the traditional uses for the plant are being confirmed by research:

The members of genus Alnus are well known for their traditional uses in the treatment of various diseases like cancer, hepatitis, inflammation of uterus, uterine cancer, rheumatism, dysentery, stomachache, diarrhea, fever, etc.  PMID:  22279375 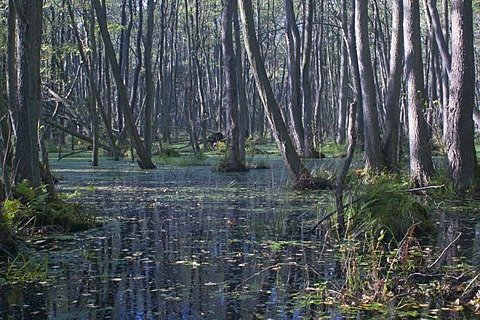